The Raunik Design Group-designed development will be built across two levels of basement car parking and will employ car stackers to provide 33 spaces.

The tower will offer seven guest rooms per floor as well as a 200sq m hotel lounge and outdoor dining area on the building’s second level.

The project’s directors declined to comment to The Urban Developer at this stage.

Privately-owned Manors Gate Group, led by Vincent Zhuang, is no stranger to hotel developments and is currently overseeing the 177-room, 4-star Carlton Hotel planned for 4-12 Leicester Place in central Melbourne.

It currently holds a land bank of sites and a portfolio of projects, mainly across Melbourne with a new focus on Brisbane and the Gold Coast. 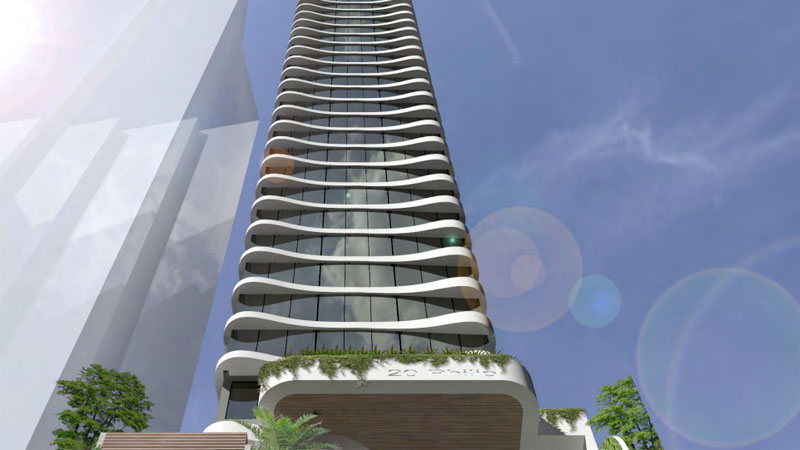 ▲ The hotel tower will be built on a site abutting Paul Little's 245-apartment tower—being delivered as a joint venture with KM Develop, a subsidiary of insolvency firm KordaMentha.

Manors Gate joins a host of interstate property groups currently looking to take advantage of rising demand for sea-change from southern state migrants which in turn has led to unprecedented price increases.

The developer is looking to position itself in a favourable position with the medium and long-term, post-pandemic outlook for the accommodation sector on the Gold Coast remaining strong and in line with its red-hot apartment market.

Australia is now on track to achieve a 70 per cent fully vaccinated adult population by the end of October and over 80 per cent by December, when domestic and international travel restrictions are expected to be lifted for those double-dosed.

In the same month, an emerging local developer lodged plans for a 33-storey tower across a similarly sized 670sq m corner site on First Avenue.

Meanwhile, Brisbane-based developer Turrisi Properties has similarlyscaled plans for a $100-million, 22-storey residential development at 9-11 Armrick Avenue before the council.