A developer has lodged plans for a 33-storey residential development in Broadbeach as the Gold Coast’s red-hot apartment market continues to outstrip supply.

The 46-apartment project, planned for a 670sq m site on the corner of First Avenue and Surf Parade—two streets back from the beach, has been put forward by 14 First Avenue Pty Ltd.

The entity is headed up by Gold Coast-based developer Leonard Steiner and joint venture partner Dimitri Katsimberis, a Sydney-based investor.

The Plus Architecture-designed development will be targeted at the local owner-occupier market.

The tower will offer two apartments per floor in three-bedroom configurations. It will be topped with a four-bedroom penthouse featuring a private rooftop area and pool.

There will also be three sub-penthouses above a residents lounge on level 27, offering a private dining and function room, meeting rooms and work pods for those needing more space while working from home.

A wellness centre and communal pool are also planned between level four and five.

The Urban Developer approached the project’s directors who declined to comment on the development at this early stage. 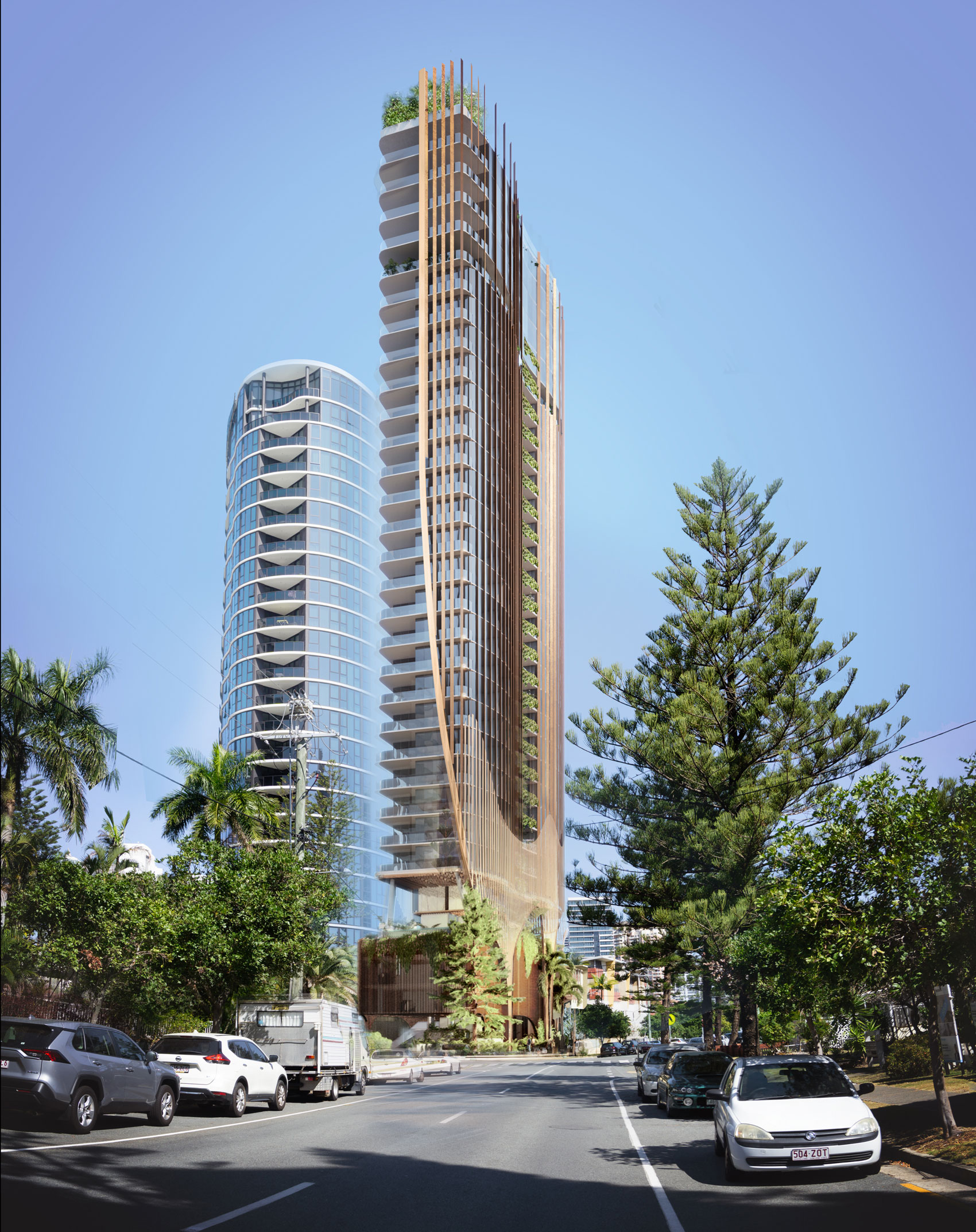 ▲ The project will feature a two level podium housing 20 car park spaces as well as spaces within the building's basement. Image: Plus Architecture

The developer joins a host of interstate property groups currently sweeping up sites on the Gold Coast as they look to take advantage of rising demand for new apartments and a looming under-supply of stock.

Record sales of new apartments, especially larger residences, have been driven by demand from downsizing owner-occupiers and interstate buyers taking advantage of the shift to work-from-home.

Developers have also been buoyed by state government forecasts that suggest the Gold Coast could now attract up to 15,000 people per annum.

To meet the demand, the city is expected to need 6300 dwellings a year.

Across the city, there are currently more than 50 residential projects with an estimated investment value of $4.8 billion under construction and with firm pipeline commitments.

Broadbeach is now among the Gold Coast’s biggest development hot spots, led by the $2-billion masterplan for The Star Gold Coast casino site and the $670-million expansion of Pacific Fair.

Also at Broadbeach, Brisbane-based developer Turrisi Properties has similarly scaled plans for a $100-million, 22-storey residential development at 9-11 Armrick Avenue before the council.

Sydney developer Macquarie Developments Group has paid about $4.5 million for a 1200sq m corner block at 15 Rosewood Avenue, which sold with a permit for 186 apartments over 39 levels.

Iris Capital’s project will comprise a total of 333 apartments across its 30-level and 40-level towers, both topped with two sub-penthouses and a penthouse.