An abandoned Melbourne hotel has changed hands in a $70-million-plus deal after a bidding war between a number of Australia’s most prominent developers and investors.

The former four-star Bayview on the Park hotel, opposite Albert Park in the city’s St Kilda Road precinct, has been acquired by Aware Super for a build-to-rent project in partnership with fund manager Altis.

It has earmarked the site of the once popular 203-room hotel at 50-52 Queens Road for more than 300 units to be rented as essential worker affordable housing.

Aware Super chief investment officer Damian Graham said the latest acquisition boosted its pipeline in the emerging build-to-rent sector in Australia to almost 1400 units and its investment in affordable housing to more than $900 million.

He said Aware Super had been investing in essential worker affordable housing for more than three years.

“During that time we have refined our approach from purchasing excess stock to underwriting shovel-ready projects to now building and developing units ourselves,” Graham said.

”In fact, we are one of Australia’s largest build-to-rent developers, with several other sites at various stages of development and completion in Sydney.”

Graham said the Bayview on the Park site ticked all the boxes for the expansion of its build-to-rent portfolio into Melbourne.

“It is in a desirable location close to hospitals, schools, transport and other amenities; enables us to develop affordable housing assets at scale, and most importantly, will deliver strong returns to our members not just in Victoria but nationally,” he said.

Bayview International Hotels & Resorts, a subsidiary of Malaysian conglomerate Oriental Holdings, listed the five-level property after it struggled through the city’s crippling Covid lockdowns, pushing the asset’s occupancy as low as 10 and 20 per cent across the year.

It was taken to market as a potential development site given its prime location and sizeable 6966sq m landholding. 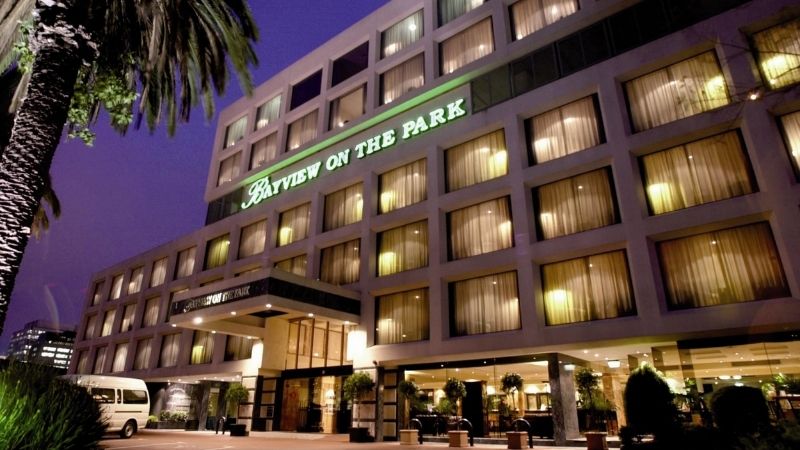 ▲The former Bayview on the Park Hotel in Melbourne's St Kilda Road precinct has sold after a hotly contested bidding war between developers and investors.

JLL’s head of investment sales Peter Harper said the deal was one of the largest hotel and inner-city land deals in Melbourne so far this year.

“Given the existing improvements and enormous landholding we received interest from an incredibly wide range of groups including those looking to re-establish the hotel, convert it to an alternative use or pursue a complete redevelopment,” he said.

“Ultimately the lure of a site of such scale saw a major institutionally backed developer secure the property ahead of several other developers.

“These groups all bid with great confidence as Queens Road has a very sound track record of delivering high quality residential, commercial and retirement living product, and due to the scarcity of such offerings, it is therefore logical that build to rent players saw great value in delivering product within the precinct.”

Mr Harper said the sale of Bayview on the Park reflected a trend across Australia where hotels in prime locations that are nearing the end of their asset lifecycle are worth more as alternative uses.

“This is particularly the case in Melbourne where the impending new supply cycle will make it very difficult for some existing hotels to remain competitive and profitable,” he said.

JLL’s head of capital markets, Josh Rutman, also part of the sales team that took the asset to market, said the Bayview on the Park was the third largest wholly-owned landholding in the St Kilda Road precinct and “the market reacted accordingly”.