Tight vacancy rates and shrinking development opportunities will accelerate rental price growth across the industrial sector, according to industry experts.

JLL’s head of industrial and logistics research Annabel McFarlane, who presented a keynote speech at The Urban Developer’s recent Industrial and Logistics vSummit, said it was a tough market for tenants looking for warehouse space.

“There’s simply not enough assets to find for a tenant … it’s very hard for the occupier and that’s driving rents [up],” McFarlane said.

“This is the first time that industrial yields have been sharper than office and retail.

“The logistics sector has a very clear structural benefit to the changing way we’re using the sector because of the pandemic.”

McFarlane said Australia’s industrial sector had experienced the biggest leasing absorption rate on record at 1.23 million sq m in the second quarter of 2021.

“What it has done is finally pushed through to some really strong quarterly rental growth in many of our industrial precincts.”

McFarlane said there had been negligible growth in industrial rents before the pandemic but now precincts such as Melbourne’s inner west had experienced strong growth.

“I think the 10 per cent growth we’ve seen this quarter in Melbourne’s west secondary market is testament to the lack of availability of any stock in that market.” 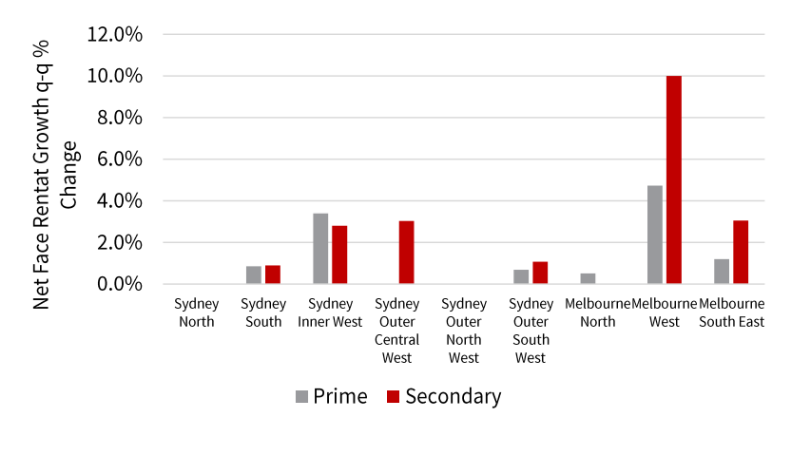 Australia’s industrial sector posted its strongest ever quarter, with $6.3 billion of closed deals, outstripping the office and retail sectors combined according to Real Capital Analytics.

More than 550 industrial assets were traded in the quarter, and Blackstone’s “mega” sale of the Milestone Industrial Portfolio to GIC and ESR for $3.8 billion accounted for 60 per cent of the second quarter’s volume.

RCA’s head of analytics Benjamin Martin-Henry said 2021 had all the hallmarks of a “record-breaking year for the sector”.

Cabot Properties head of Asia Pacific Sally Box said the rise of rental growth in the industrial sector was a global phenomenon.

“We are seeing incredible rental growth [globally] at the moment,” Box said.

“I think here [in Australia] we’re believers that it will come and we’re starting to see it.

“One thing we definitely see globally including in Australia is more rental growth coming from infill locations than we do see coming from further out.”

Hines head of industrial and logistics Australia Alysia Reilly said Hines’ investment strategy was to focus on markets where there was forecast growth in price and rental growth.

“Most markets we are looking at there are positive signs for forecast rental growth and that could be up to three-and-a-half times that historical growth trend.”

Curtis said while 30 per cent of the REIT was in manufacturing there had been a renewed focus on cold storage due to its potential for rental price growth and “sticky” tenants.

“There is zero vacancy rate in cold storage, you cannot lease cold storage space to save yourself right now.

“It’s a sector we’re particularly bullish about from a rental growth perspective.”