Pace Development Group will build a $80 million horseshoe-shaped building at Flemington racecourse after winning approval from the Melbourne City Council.

The approval comes after the Victoria Racing Club announced the Melbourne Cup Carnival would still “go ahead as it has done for almost 160 years”.

Tickets were still on sale (at the time of publishing) for the entire Melbourne Cup Carnival including the race that stops the nation on 3 November.

Melbourne Cup to go ahead

The future of the November 2020 race was in doubt after the Victoria Racing Club stood down the majority of staff because of the Covid-19 pandemic.

“We have explored every option and we believe this model will best allow our people and the Club to withstand these unprecedented times and resume regular activity as soon as this situation passes,” Wilson said.

In the 27 March statement the racing club said it expected the Melbourne Cup 2020 would go ahead.

Wilson said although the effect of Covid-19 on all sectors including events has been severe the club was planning for Australia’s premier sporting and social event to go ahead as it has done for almost 160 years.

“We are looking at a number of different scenarios so that we can emerge from this crisis and remain one of the nation’s greatest events that bolsters not only Victoria’s tourism, hospitality and retail sectors but the spirits of a nation,” Wilson said.

“The Melbourne Cup Carnival is an iconic Australian event, generating thousands of jobs and hundreds of millions of dollars for the economy every year.” 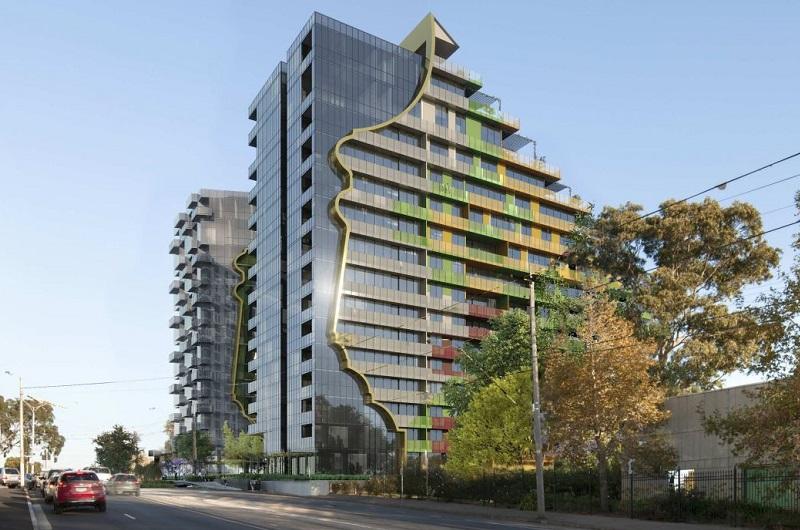 Pace Development Group launched the racecourse project at the Flemington Birdcage enclosure in 2018.

The group sponsored the invitation only, double-storey marquee which was called the Pace Penthouse and previewed the development.

When built, the 15-storey building with a camouflage pattern was expected to become the backdrop for the Melbourne Cup at 428-550 Epsom Road, Flemington.

The residential building featured a small retail space, restaurant and cafe on the ground floor and almost 300 apartments above.

The plans designed by ARM Architecture were approved unanimously by councillors at The Future of Melbourne Committee meeting on 7 April.

Councillor Nicholas Reece said the building would be a postcard of Melbourne for the millions of people watching the race each year.

“They [ARM] have come up with a very innovative, dare I say edgy design which I think is very Melbourne and will make for a great backdrop for when the horses gallop around,” Reece said.

The predominantly vacant land was identified as “surplus to racing requirements” with the heritage-listed Jockey’s Convalescent Lodge to be preserved.

The small octagonal building was described as late nineteenth century and a unique example of a centralised hospital building in Victoria.

Reece said he was please to see Pace and ARM respectfully working to preserve the lodge and providing new space to the community.

“This development does include some new publicly accessible space, that open space is on private land and it was spaced that was previously fenced off as part of the Flemmington Racetrack,” the councillor said.

The Melbourne-based developer, led by Shane Wilkinson, purchased the 10,600sq m parcel of land at Flemington Racecourse in late 2018 from the Victorian Racing Club following a competitive tender process.

The site sits atop the 1,200 metre main racing straight known as the StraightSix.

Pace have a number of projects across Melbourne including two residential towers in the Macaulay urban renewal area and recently sold its under-construction office block in Collingwood for $31 million.