“Don’t let a bunch of stupid anti-vaxxers stuff it up.”

That call from Scott Hutchinson, chairman of Hutchinson Builders—Australia’s largest private construction company—sums up the overriding sentiment of a beleaguered industry at boiling point and being pushed to the brink.

Already buckling under pressure from crippling supply shortages and skyrocketing building costs, the construction industry's troubles have suddenly got much worse this week.

In chaotic and ugly scenes, an army of hundreds of angry hi vis-clad protestors has been storming the streets of the locked-down Melbourne CBD sparking the deployment of riot police and the firing of rubber bullets to control the hostile crowd.

The explosion of rage and violence by the “rogue protestors” against mandated Covid-19 vaccinations for Victoria’s construction workers has delivered a blow to the industry, which had been working hard to keep sites safe and open.

Within hours of Monday’s first fiery clash between the flare-wielding demonstrators and police, the Victorian government imposed a two-week shutdown of the state’s construction sites and there will be a heavy price to pay.

It is conservatively estimated the abrupt site closures and resulting project delays will cost the industry $1 billion a week but some experts believe the total damage bill could be more than $6 billion. 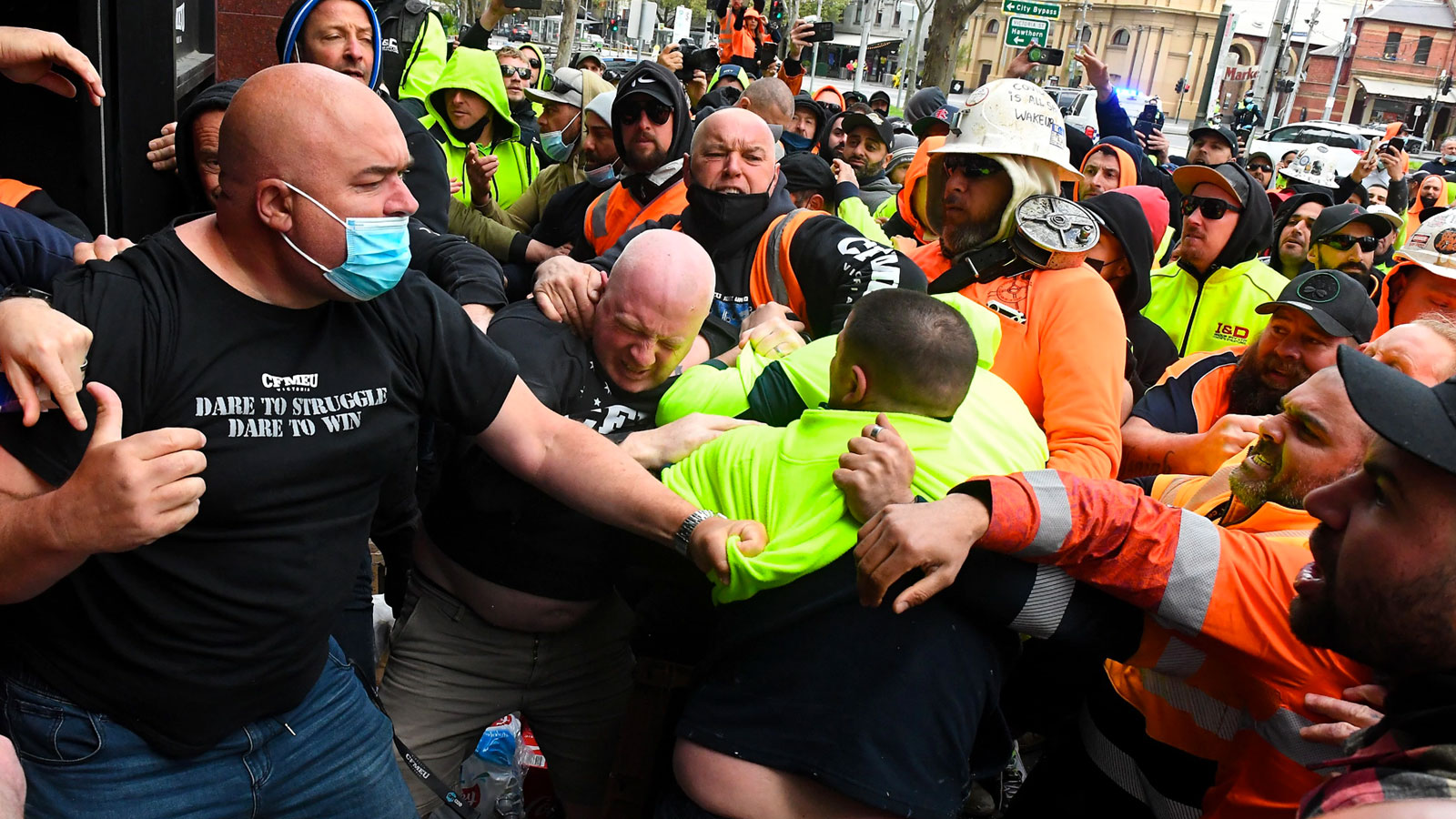 ▲ Construction to shut down in Victoria after violent protests at CFMEU office.

Hutchinson Builders’ Melbourne workbook is worth about $260 million to $280 million a year and it currently has about 13 construction sites impacted by the latest events.

“Of course, I’d rather they hadn’t closed things down,” Hutchinson said.

“Everyone—the governments, the unions and construction companies—had been working really well together to keep things going until now.

“Sure, [vaccination] should be a choice, and I’m not judging anyone, but if you choose not to be vaccinated it’s all about the potential consequences of your choice.

“If you’re an anti-vaxxer and don’t believe in the science, go ahead and sprinkle some magic dust over yourself or get some herbs and spices and see if that works for you. That’s your choice.

“But the reality is, eventually, you won’t be able to go anywhere unless you’ve been vaccinated ... it’s the only way forward for everything and I think the large majority of people have already worked that out.” 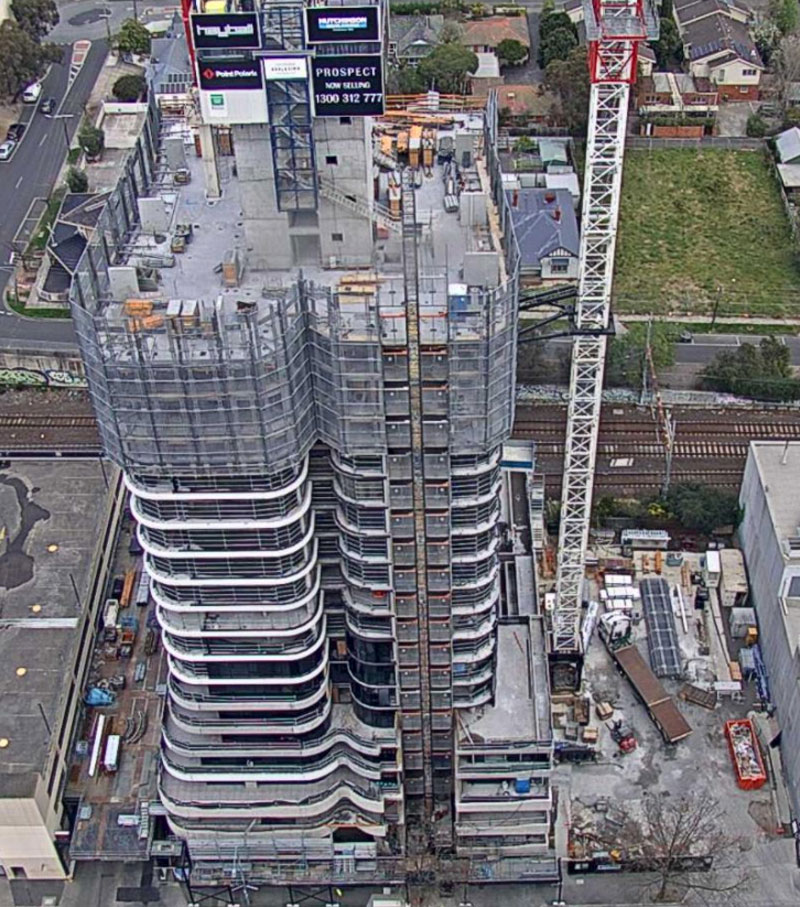 ▲ Hutchinson Builders have closed at least 13 sites under way in Melbourne, including the $75m Prospect tower in Box Hill.

The protests and riots follow the Victorian government issuing a mandate late last week requiring all construction workers to have had at least their first Covid-19 vaccine dose by September 23.

The CFMEU has condemned the violent demonstrators and Monday’s “mindless” attack on its Victorian branch office, in which windows were smashed and abuse and projectiles were hurled at its state secretary John Setka as he tried to address the crowd.

It claims the protest was “heavily infiltrated by neo-Nazis and other right wing extremist groups”.

“It is clear that a minority of those who participated were actual union members,” the CFMEU said.

“The union will continue to defend its members' rights to work safely across Australia and we will not be intimidated from doing our job.

“These are not actions of people who care about their workmates and the construction industry.”

Ironically, the Victorian shutdown comes as New South Wales is set to lift the 50 per cent cap on its construction worksites and resume full capacity from September 27.

Peak bodies the Property Council of Australia and Housing Industry Australia have described the Victorian government’s sudden shutdown of the state’s construction sites as both disappointing and challenging.

“We condemn the actions of rogue protesters we’ve seen in Melbourne in recent days, and they do not represent the industry or its workforce,” Property Council Victorian executive director Danni Hunter said.

“The majority of construction sites and construction workers are doing everything required of them to meet the highest standards of Covid safety and have done so since the pandemic started.

“Construction industry workers are stepping up and getting vaccinated. Closing the industry will prevent them going to work and getting paid and it will stall projects causing immensely costly delays, putting projects and Victorian jobs at risk.

“It is critical that the government and the public health team work extremely closely with the industry to immediately lay out a plan for reopening as soon as possible and get Victorians back to work on site and projects back up and running.”

HIA Victorian executive director Fiona Nield said despite the government citing widespread Covid safety non-compliance in the industry as the trigger for the shutdown, the home building sector’s track record had been excellent up until this point.

“Domestic home building sites have been operating with heavy restrictions on worker numbers and the movement of workers between sites,” she said.

“While this announcement is disappointing, and the next few days will be challenging to make sites secure, the industry will work to meet the government's requirements to enable work to recommence as soon as possible.”

She said the shutdown would create enormous difficulties, particularly for the 30,000 small scale residential building projects under construction, each of which will need to be made safe and secure during the shutdown period.

Australian Constructors’ Association chief executive Jon Davies added: “It's really sad to see it come to all of this”.

“There was some inevitability about it but it's really disappointing,” he told ABC Radio.

“I think it didn't have to end up like this. I think through improved engagement with industry, we could have avoided this but we are now where we are and we're very keen to work with the government to work on a reopening plan.”