Australia’s construction industry is a $360-billion house of cards teetering in a profitless boom in which builders big and small are going bust—and warnings from its coalface indicate the worst is yet to come.

According to industry leaders, long-established cracks in the sector’s foundation are now so wide that it is “totally unsustainable” and in need of urgent major reform if it is to have the capacity to build projects that need to be built.

Up to 25 per cent of all insolvencies in Australia are companies within the construction industry.

“It’s a bit of a shocking statistic,” says Australian Constructors Association (ACA) chief executive Jon Davies. “Particularly when you look at it in terms of the industry’s contribution to the economy (8 to 10 per cent of GDP) it’s a disproportionately high level.

“At the moment you are hearing a lot of people talking about a ‘profitless boom’ and it has been a reality.”

“But the bigger issue is not so much the profit margins, it’s the willingness of our industry to accept risks that they really aren’t able to quantify, and they really shouldn’t be trying to, from clients that are more than happy to try to pass those risks onto them.

“So you have this race to the bottom where a lot of contractors, who are still trying to recover from years and years of under profitability, are saying ‘yeah, we’ll take on that risk, we’ll price that’.

“Then that risk comes to pass and suddenly they realise they’ve got a big problem and in a world of hurt.”

But according to Davies, the cracks in the industry run far deeper than boom-bust cycles and a lack of profitability.

“We have a real cultural problem within our industry,” Davies says. “We’re a very adversarial industry and that has created inherent issues in terms of productivity, mental health and diversity.

“And yet now you’ve got a situation where the government is relying on that industry with all these problems to lead the economy forward.

“However, there’s a real concern around capability and capacity to respond to and deliver on that record pipeline of work.”

One of the most recent casualties of Australia’s construction crisis is Perth-based Pindan Group—the head contractor for a number of WA government projects—which was placed in external administration in May owing creditors $80 million. 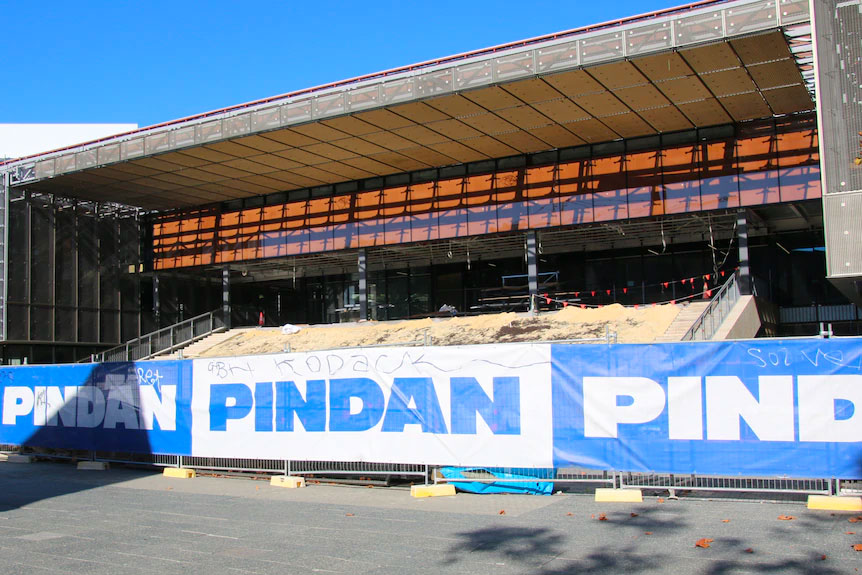 ▲ The administrator of collapsed building company Pindan Group says up to 1400 creditors are owed between $70 million and $80 million.

It joins a growing list of high-profile company collapses, including one of the country’s biggest construction firms, Melbourne-based building empire Grocon.

“Much worse is to come. This is just the start … it’s a shambles,” says Scott Hutchinson, the chairman of one of Australia’s largest private construction companies, Brisbane-based Hutchinson Builders.

“It’s completely overheated. It’s getting ready to explode and for people to go down.

“In 12 or 18 months there’s likely to be a lot of builders going broke and most of them don’t know it yet. Then we’ll have a flight to balance sheets.

“But at the moment everybody’s just rushing to get trades and buy materials, costs are going through the roof … and that’s when it gets easy to win work because the builders who know what’s going on close their books or put up their prices, and the ones who are desperate for cash flow will bid low and then end up going down massively.”

Hutchinson Builders has a current workbook of 150 projects stretching across Queensland, New South Wales, Victoria, South Australia and Tasmania with a balance sheet of $350 million and an annual turnover of around $3 billion.

“Everybody in the world knows it,” he says. “I was in Paris a few years ago and the big builders over there just said ‘We’re not touching Australia, it’s designed to fail’.

“It’s extremely competitive, there’s no barriers to entry and it’s not a scale game.

“It’s counterintuitive to most industries. 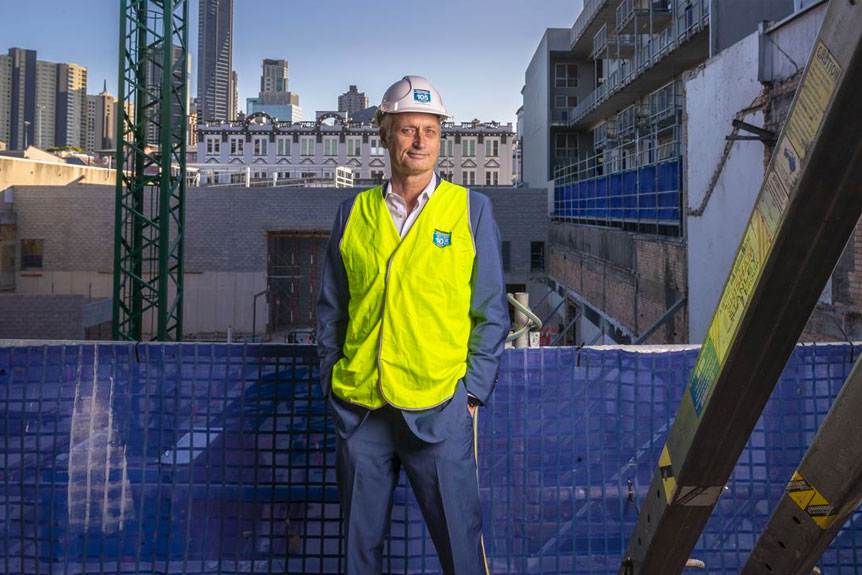 ▲ Scott Hutchinson says he fears that in 12 months there will be a lot of builders going broke.

Gold Coast-based Condev Construction has a workbook of 80-85 per cent multi-level residential developments. Managing director Steve Marais says profit margins are currently “down to 1 per cent and still heading south”.

“With the erosion of profits there’s going to be a bloodbath at some point,” he says.

Marais says Condev has a turnover of roughly $250 million a year but in a recent two-week period alone it had closed its books to a total of $400-million worth of work.

“The boom market is where builders go broke if they take on too much work. I call it the seduction of work and ultimately it will be where the losses are incurred,” he says.

“It’s all about how you manage the risks associated with an upward market swing.”

But he also strongly believes that changes need to be made to help stem the industry’s unenviable and ever-growing list of company collapses.

“At the moment you can keep procuring work unregulated,” Marais says. “I strongly believe that every time a project of over $10 million is procured by a builder, the financial audits should have to be submitted for review.”

“The risk profile from when I started in the industry 20 years ago is exponentially worse on contractors for no good reason,” she says.

“Contractors generally operate on margins of anywhere between 2 and 5 per cent, but if you fund a $100-million project you have the potential to lose $50 million to $100 million.

“And, unfortunately, they do take on risk that they can’t manage and if one or two of those come home to roost it can be pretty ugly.

“But tell me another industry where when it all goes wrong we essentially hand you the keys to liquidate the company? There isn’t one.

“So how has the construction industry got to the point where that is the accepted norm?

“The whole industry is unsustainable for so many reasons that it needs to recalibrate. 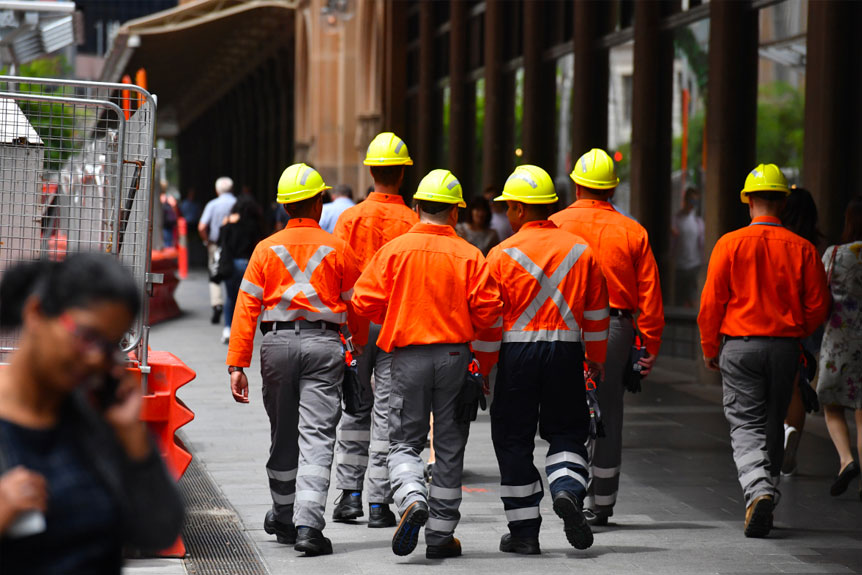 ▲ Up to 25 per cent of all insolvencies are companies in the construction industry.

Among the $640-million worth of projects on the workbook of Roberts Co is the first stage of the Concord Hospital Redevelopment in Sydney, which it is delivering with a strict five-day working week as a pilot for the Construction Industry Culture Taskforce.

“In the interim report we have just received, 81.4 per cent of the survey respondents said it’s a better way to work,” she says.

“We have not only achieved better health and wellbeing outcomes but we have also achieved increased productivity on site by giving people back their weekends and the project will finish slightly ahead of time.

“This is a very hard industry. It takes a toll on people and I think the pandemic has provided an incredible opportunity to recalibrate and substantially reform how we work.”

He declared that despite being in the midst of an infrastructure boom the industry was “teetering on the brink of collapse”.

Since then, he says, all key stakeholders have banded together and faced the Covid-19 pandemic, paving the way for change with a focus on developing fairer risk-sharing on major projects.

“We are having constructive discussions with our government customers, peers, and industry associations to reform the industry for the better,” Barr says.

“There is some way to go but I’m confident the industry is holding up well against the challenges of the past year.”