The Urban Mobility ‘Revolution’ Is Closer Than You Think

The ridesharing giant will make the decision on which city will be home to the first international Uber air market test site on Tuesday — the first day of Uber’s two-day Elevate Summit held in Washington D.C.

Sydney and Melbourne have been shortlisted, along with Paris, Sao Paolo, Mumbai and Tokyo.

Uber’s ambitious electric vertical take-off and landing (eVTOL) plans were first unveiled in 2016, with the company announcing it was on the hunt for a third test city last year.

Dallas and Los Angeles were flagged as the initial launch locations, with trial flights commencing in 2020 and a full-service by 2023.

Speaking to The Urban Developer before he jets off to the Uber Elevate conference in Washington D.C., Skyportz chief executive, and former deputy lord mayor, Clem Newton-Brown says that the “flying taxi” reality is much closer than people think.

“This is not fantasy — there are already flying prototypes being developed by some of the world’s largest aeronautical companies such as Bell and Airbus.

“There is no reason why we can’t be flying eVTOLs from the City to Melbourne airport, regional tourism destinations and major events within the next few years.

“If you have existing helipad infrastructure it makes it very easy to make that available with upgrades for the technical requirements for VTOLS.”

Newton-Brown is leading the Melbourne bid and has met with Uber executives, facilitating meetings with government ministers and the City of Melbourne.

The first Skyportz landing infrastructure is proposed in a joint venture with Microflite at an existing helipad at Batman Park.

“Melbourne is the only city in Australia where you can land helicopters in the central city and we are well placed to provide the infrastructure requirements for Uber Air,” Newton-Brown said.

Related: Uber Launches ‘Skyports’ the Helipads of the Future 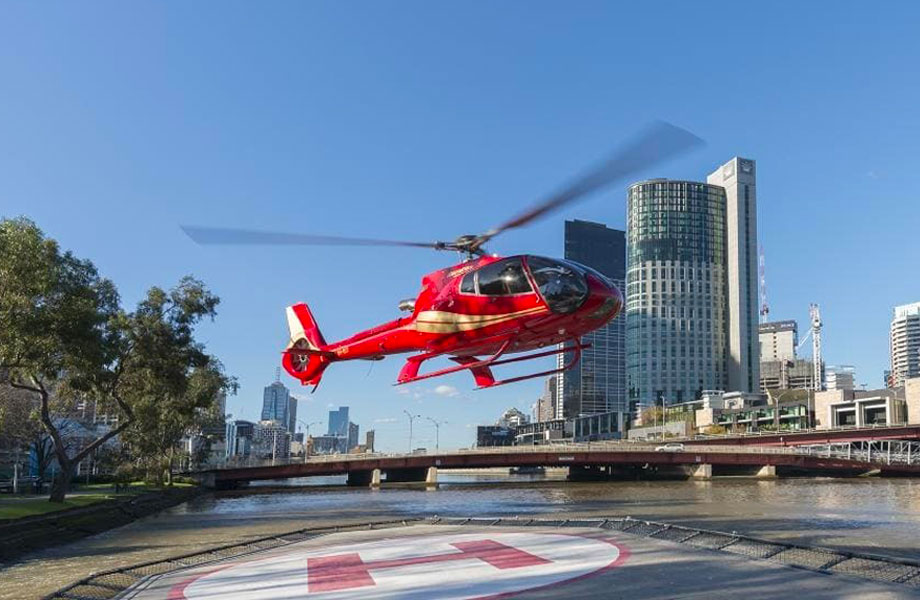 On-demand aviation relies on building landing infrastructure and working with developers, governments and regulators to service this next-generation mode of transportation.

“Some of the largest aeronautical companies in the world are putting hundreds of millions of dollars into this,” Newton-Brown said.

“The technology is not what will be what holds it up — regulation, social license and the necessary infrastructure will hold it up.

“It is inevitable that CASA will be certifying flying machines of this type in the near future.”

Newton-Brown is already in discussions with property developers to build Skyportz pads on the roof of developments — before the aircraft actually exists.

“This way the decks can be used for other purposes until they can be used [for aircraft].

“There’s certainly an interest in it from a marketing perspective, developers are looking at it as future-proofing their buildings.”

In May, Uber announced that it is working with five companies to develop the flying car prototype — on track for its pipeline of 2020 trials and commercial trips by 2023.

The company has promised that the concept will be an “affordable form of daily transportation for the masses, even less expensive than owning a car”.

In the interim the company is pursuing an on-demand helicopter service, “Uber Copter” in New York City, where passengers will be able to book flights through Uber’s existing app to nearby airports from 9 July.

“Starting in 2023, Uber customers will be able to push a button and get a flight on-demand with Uber Air in Dallas, Los Angeles and a new international market.”

As the decision day looms, Newton-Brown is confident that Melbourne is well-placed to become Uber Air’s first international test city.

“Melbourne’s in a position where we have a government that’s keen, a stable electricity grid that can handle the demand and the topography is relatively flat and suited to a trial phase.”