The $60-million project is something of a return home for the third-generation south-east Queensland builders, who moved north from NSW in the early 1950s.

Heran wants to build 69 units in one building and 49 in the other on four adjoining lots totalling 3640sq m on Enid Street, about 850m from the Tweed River and Fingal Beach.

The Jackson Teece design will house 10 single-bedroom, 46 two-bedroom, 56 three-bedroom and two four-bedroom apartments. The towers will be built in two stages, with the northern building above a single podium of four levels. About 1000sq m of communal open space on the second level will include a pool.

In response to a meeting with Tweed Shire Council in June last year the developers have reconsidered an original design, adding greater building separation, more unit cross-ventilation, plus alterations to building setbacks. 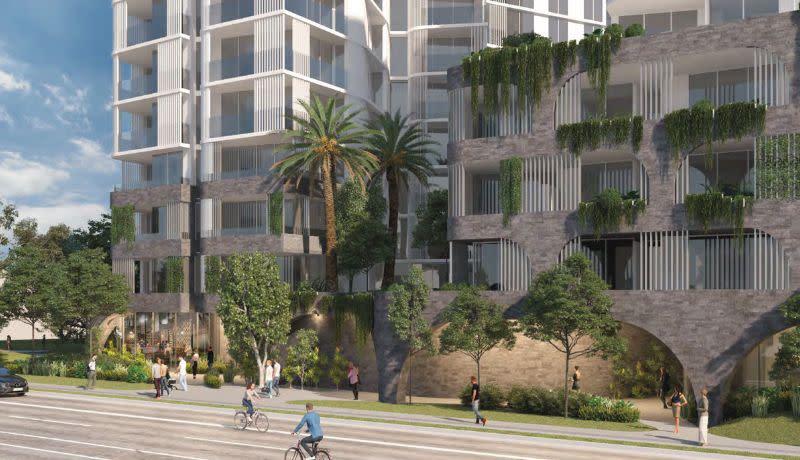 ▲ The Jackson Teece design will be built in two stages, with the northern building above a single podium.

The two towers will have a height of 40.25m—about 9m less than the allowable maximum. A single-level basement below the podium will allow parking for 192 cars.

The application seeks to demolish existing buildings on the four lots including a single-storey commercial building and a two-storey block of units.

Additional council-owned land to the west of the site is included in the application for the realignment of a sewer main, currently within the build area.

In filing the application on behalf of Heran, town planners Zone Planning Group said previous applications for residential accommodation had been proposed and supported on the site.

While the project will initially be assessed by Tweed council, the size of the capital investment makes it a “regionally significant development”, which means any final determination will be by the Northern Regional Planning Panel.