The Sirius building, one of Sydney’s most well-known Brutalist landmarks, has officially launched to market with price expectations by the New South Wales government of more than $120 million.

The building, located in The Rocks district on Sydney’s harbour side, represents prime real estate to the state government in a lucrative real estate deal brokered by Savills Australia.

Development of the site will depend on the government’s proposed amendments to the zoning of the block by expanding the gross floor area of the site to 8420sq m from its current 7,010 square metres.

“And will certainly attract interest from around the globe, with a once in a lifetime opportunity to revitalise this prime site.” 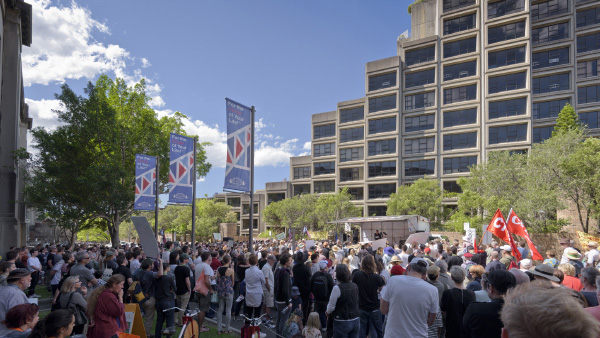 The official expression of interest campaign comes after much protest since the initial announcement to sell the former public housing building in 2014.

Chair of community campaign group Save Our Sirius Shaun Carter has been calling on the NSW government to stop the sale, and list Sirius on the State Heritage Register.

“We strongly advise anyone interested in buying Sirius to work with us and the building’s original architect Tao Gofers, to preserve Sirius for state heritage listing.”

More than 300 prospective buyers have registered their interest in the Sirius site since January.

“Never before has a building with such unobstructed and striking harbour views within the heart of Sydney been offered to the market,” Fenn said.

Continuing their fight to preserve the building, Carter said Sirius had been recommended for State Listing by the Government’s own Heritage Council, while also being recognised as a site of significance by The Australian Institute of Architects and The City of Sydney.

“The real estate agents skirt the truth when they say Sirius is not State Heritage listed. It is,” Carter said.

Located at 2-60 Cumberland Street, the revised valuation of the Sirius building is less than earlier estimates from $150 million and $180 million due to the state government’s early proposals of up to 250 apartments on the site.

The Sirius building is now vacant after 90-year-old Myra Demetriou, the last-remaining resident moved out earlier this year.