The end is clearly nigh for the House of Sunland.

Downsizing by design, his wind-down of Sunland Group—the property development giant he built from a single rendered-brick house project in the early 1980s—is in full swing.

“Maybe we have another 12 months or 18 months to bring the public company to an end,” Abedian says.

“In the meantime, we have sold every single asset that we had, except this office—that is the last asset we have and it is currently under final negotiation.”

And with the recent completion and settlement of its 44-storey 272 Hedges Avenue high-rise along the Gold Coast’s millionaires’ row, Sunland’s development pipeline is down to its final project.

After 40 years, the creation of 40,000 homes as well as dreaming up and delivering some of the glitter strip’s most iconic developments, the company is well-progressed on leaving its last towering—albeit mid-rise—design on the city’s skyline. 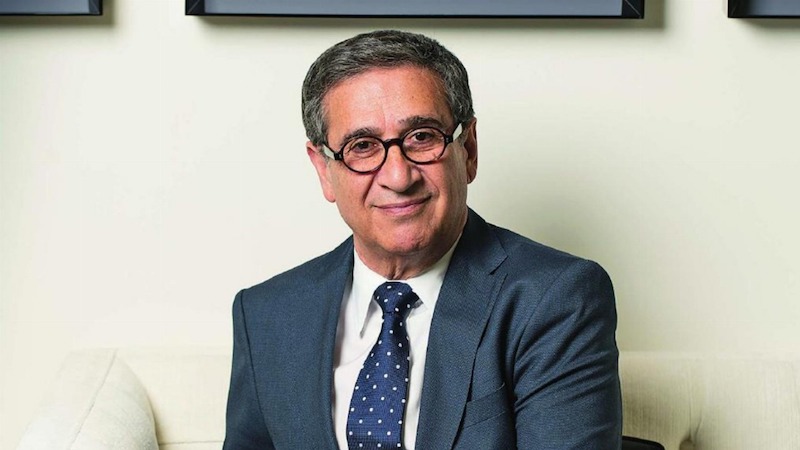 The Lanes Residences, a four-building waterfront project at Mermaid Waters, is scheduled to wrap up in the first quarter of 2023.

It will mark the end of an era for Abedian, an Iranian-born immigrant who studied architecture at Austria’s Graz University and then took the Gold Coast to new heights, forever changing its development mindset with the construction of Q1—the one-time world’s tallest residential tower—and the first fashion-branded hotel Palazzo Versace.

“When your whole life has been one company, of course you have emotional attachment to it,” Abedian says.

“But it is not about the name. It is about the ability to produce something that has market acceptance and during four decades you have been recognised, hopefully, as a good developer.”

Not that the 73-year-old—despite a health scare in recent years—is entertaining any thoughts of bowing out of the development sector just yet.

“Bringing the public company to an end doesn’t mean the Abedian family is coming to an end,” he says.

The “essence” of Sunland, he insists, will continue to prevail as he and the next generation of the House of Abedian fly solo as private developers, unconstrained by the duties and demands of a publicly-listed company. 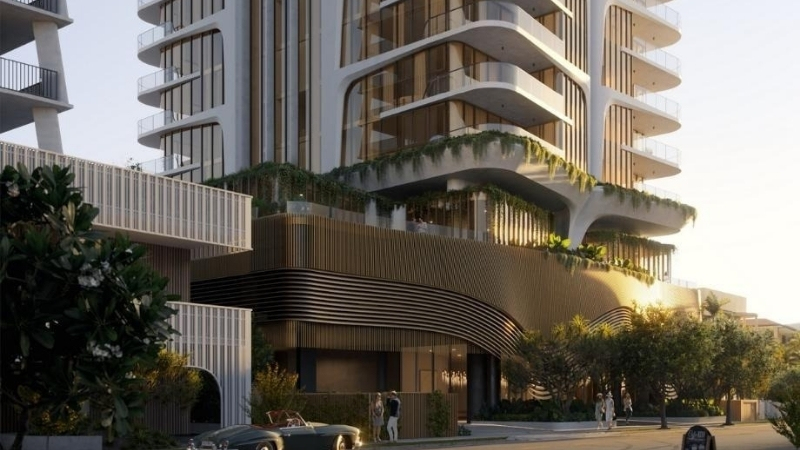 “We will do more projects,” Abedian declares. “But we will choose what we want to do, whereas before we had to do.

“The pressure of the public company is always to produce more, more and more. It doesn’t understand the cycle is a reality of the property industry.

Around the corner from Sunland’s shiny new landmark skyscraper on Hedges Avenue, Abedian is already making it known that his towering ambitions are far from fading.

He has submitted plans for a $255-million, 36-storey tower on a 1620sq m site on Mermaid Beach’s Peerless Avenue, which straddles the southern boundary of a high-density residential zone. If approved, it will comprise 109 apartments above a three-storey podium.

And as the first project in his career reboot he has set himself high expectations of surpassing even the towering developments he delivered for Sunland.

“I hope [it will be] better because it is showcasing the family ability.”

Abedian’s new beginning as a born-again private developer comes as a slowdown in the property market gains considerable momentum off the back of interest rate hikes and rising inflation.

But if he has any concerns about the timing of his decision to go solo, he is keeping them close to his chest. 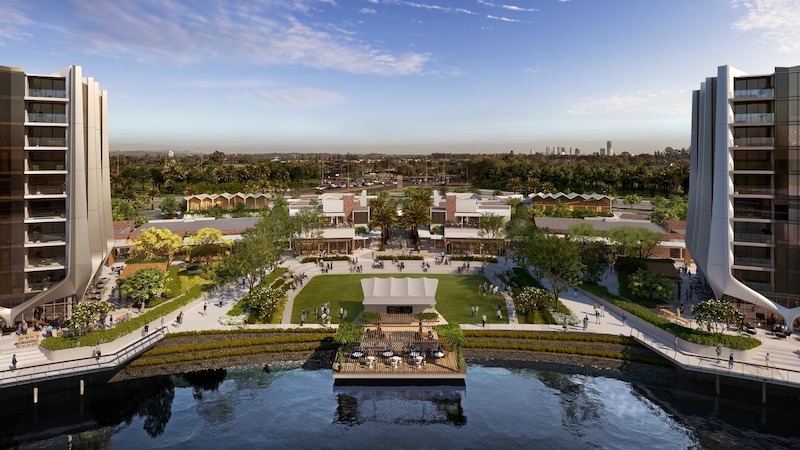 ▲ A render of Sunland’s The Lanes development is scheduled to wrap up in the first quarter of 2023.

“I see it in a different light because I believe from a crazy market that had no perception of reality we are going to a level of normality,” he says.

Apartment re-sales in Sunland’s 272 Hedges Avenue tower development—fetching from $650,000 up to $2.5 million above the original contract prices—were his barometer of the unprecedented boom.

“Between March 2020 and December 2021 the median house price in Australia grew by 32 per cent,” Abedian says.

“Is it healthy to continue like that? The answer is no. Is it good that we are seeing a massive slowdown that is happening across the world? The answer is yes.

“Personally, I welcome that—a level of normality is needed.

“Because I believe we have a responsibility as a producer for the future generations … it’s not about how much I cash out for and how much my bank account goes up but what are we going to leave behind.

“The creation has always been the motivation for me, not the money.”

Nevertheless, Abedian is acutely aware of the lucrative development potential from the Gold Coast’s accelerated growth since the pandemic, with interstate migration pushing its population beyond 700,000.

“We ‘ve run out of land and the only way we can accommodate people coming to live here is to go vertical.” 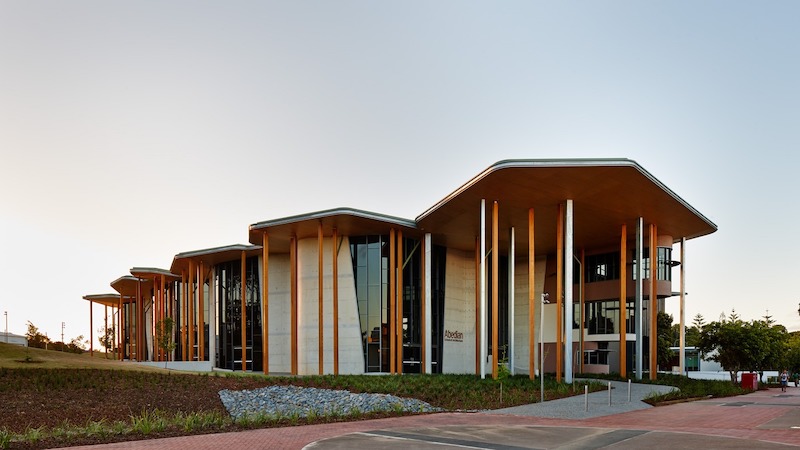 ▲ Legacy: The Abedian School of Architecture at Bond University on the Gold Coast.

Plans to wind down Sunland’s business operation were announced in October 2020 but Abedian concedes the writing had been on the wall for almost a decade.

Its share price plunged from more than $4 to under 30 cents in the fallout from the global financial crisis.

On his return to Australia in 2011 from Dubai—where Sunland was developing D1, the sister tower to Q1, and the second Palazzo Versace hotel—Abedian says “the disparity between our asset backing and the share market was massive”.

In an asset-swap deal with its Dubai partner, the company ditched its development interests in the United Arab Emirates and then began rebuilding on home soil.

“Out of 37 companies that were engaged with development in 2011 on the Gold Coast, 35 of them went through liquidation and bankruptcy,” Abedian recalls.

“So, we had this great opportunity to acquire assets, some of them for a few cents in the dollar, and we restarted the portfolio of the company.

“But the share price never ever really reached the level it used to be.”

Ironically, he says, after announcing the plans to wind down the company’s business operations “the share price skyrocketed back to very close to our asset backing”.

Abedian still fondly remembers the sliding door moment in the early 1980s that changed the fortunes of his then start-up development business.

At around 6am, while cleaning the driveway of one of his early house projects in the enclave of Isle of Sorrento, a yellow Rolls Royce pulled up.

“They came over and asked me ‘Did you build that?’ I said yes.

“Then Mike Gore said ‘Do you know who I am?’ I said no. He said ‘Come and see me, I’m developing a resort called Sanctuary Cove’.

“That was really the trigger for Sunland … he asked me to do the waterfront villas at Sanctuary Cove and one thing led to the next.”

These days, Abedian puts a high priority on his philanthropic involvement with the community, which has a focus on education.

His generosity was behind the creation of Bond University’s Abedian School of Architecture. Not bad for a once budding architect whose own tertiary qualifications were not recognised when he first arrived in Australia.

“Everything I earn goes to the [Abedian] Foundation,” he says. “So, I'm not working for money and that is maybe more enjoyable because you are not forced to do.”

Suddenly looking at the time, the Sunland chairman realises he has another meeting scheduled—a date with destiny to discuss with council the proposal for his new development side hustle on Peerless Avenue.