Soaring residential property prices are pushing yields to historic lows as the rental market struggles to keep up.

Gross rental yield dropped to an all-time low of 3.32 per cent with national housing values rising by 18.4 per cent and rents rising only 8.2 per cent, according to Corelogic.

Melbourne and Sydney had the lowest rental yields at 2.8 and 2.5 per cent respectively.

Record lows were also reached in Brisbane at 3.99 percent, Hobart 4.01 per cent and Canberra 3.99 per cent for August.

Although rent went up in the past year in all capital cities purchase prices outstripped this massively, increasing $2000 a week on average. 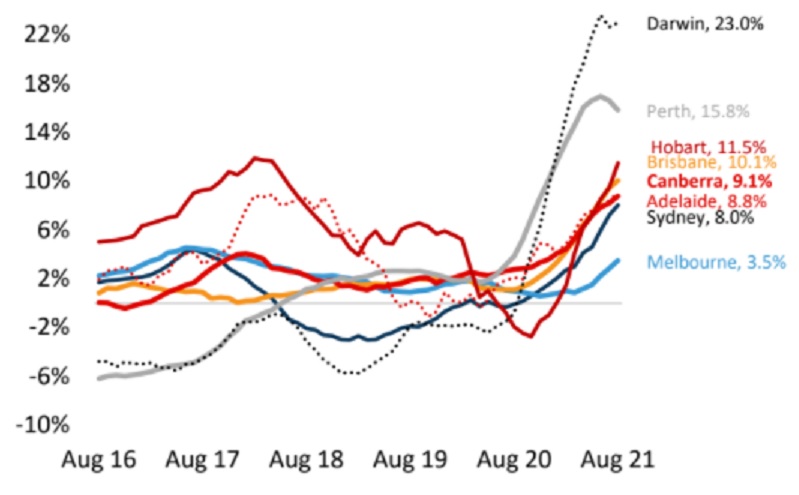 “The sharp drop in demand due to closed borders has been exacerbated by high supply levels as both cities come out of an unprecedented surge in inner city apartment construction.”

Lawless said rent in Darwin and Perth had likely peaked but there was room for growth in other markets.

“The drag from the current lockdowns on the housing market won’t last, but we expect house price growth to slow in earnest next year as affordability constraints bite,” Udy said.

This could give the rental market time to catch up with, an extremely tight rental market, recorded in Domain’s report for July.

It showed most cities were close to record lows in vacancy rates with the exception of Melbourne and Sydney, however those markets were improving.

The exception to slow rental growth was in Byron Bay and coastal locations in Victoria however property prices in these locations were still keeping yields down.