Development applications for the Sunshine Coast's new greenfield $2-billion CBD are continuing to flood in, with a mixed-use tower on a 3500sq m site on its northern edge the latest.

The 13-storey development has been put forward by Capital 22, a private entity headed by commercial property lawyer and SunCentral secretary John Gallagher.

SunCentral was established by the Sunshine Coast Council in early 2015 to oversee the design and delivery of the new city centre.

The prominent corner site, neighbouring the priority development area, is made up of two lots purchased for a combined $6.5 million; 132 and 134-136 Aerodrome Road.

The site is currently occupied by two retail centres—Neighbours Aid and Salvation Army Family Store—and is next to Bob Jane T-Marts.

Capital 22’s proposed project, designed by Cottee Parker, will include three levels of office space and parking for 250 cars across the building’s three-level podium as well as a communal area with a pool and terrace on the fifth level.

It will offer 100 apartments in two- and three-bedroom configurations which the developer plans to release as a mix of short- and long-term accommodation.

The under construction CBD will eventually offer 150,000sq m of commercial space and 65,000sq m of retail floorspace along with 4000 residential apartments across a number of precincts.

It will also feature a premium hotel, and a new entertainment space. 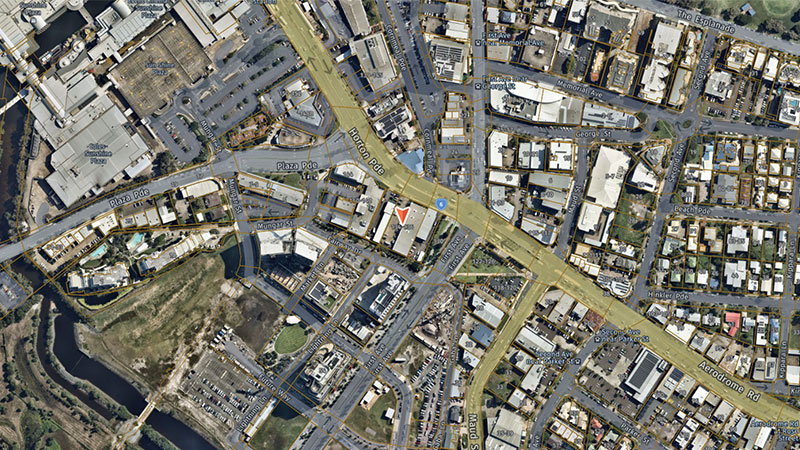 ▲ The development will be at the northern “gateway entry point” of the emerging CBD. Image: Nearmap

The project, which Walker claimed was “the single most sophisticated contribution to the commercial office market” on the Sunshine Coast, has been designed by Cox Architecture and will hold a 5-Star Green Star Rating.

Walker, and the Sunshine Coast Regional Council, also has plans for a nine-storey car parking, retail and dining mid-rise development on Market Lane.

Meanwhile, Pro-Invest Group is adding motel and retail space to the CBD in a bid to capitalise on the growing number of corporate professionals living in and visiting the region.

Construction is being completed on the Holiday Inn Express and Suites on First Ave will have 180 guest rooms, a rooftop swimming pool, bar and dining venue along with parking, retailers and conference facilities. It will open mid-year.