The Gold Coast’s high-rise apartment boom is rapidly coming off the boil with a rising number of projects being ditched as the city’s development sector takes a reality check.

Sky-high construction costs and crippling labour shortages are putting the crunch on off-the-plan developments, which are being dumped before they get out of the ground in the face of multi-million-dollar cost blowouts.

The sold-out $140-million Alegria residential tower project at Palm Beach is the latest development to be scrapped, with buyers of its 76 apartments informed recently it would not be proceeding.

Initial site works had been undertaken on the beachfront site by failed Gold Coast construction firm Condev and a new builder secured but costs reportedly had spiralled by up to $10 million.

The Cottee Parker-designed tower was being developed by Anthony Gordon and Paul Younan’s Daydream Property Developments, which acquired the 3304sq m site from Regis Aged Care in 2020 for $21 million.

It is understood to be among a handful of the city's planned apartment projects so far deemed no longer viable and canned by their proponents.

“We haven’t been seeing many projects launched and those projects that have launched seem to have fallen by the wayside because they can’t get building prices that match the selling prices.

“There are two issues, the first is [rising] construction costs and the second is [lack of] availability of manpower.

“And I think with a lot of these projects not starting we may see some realism come back into the market.

“Subcontract trades and builders just react to the market and when there’s more demand than supply, of course, the price goes up … but then, all of a sudden, there’ll be subcontractors with no work in their books. 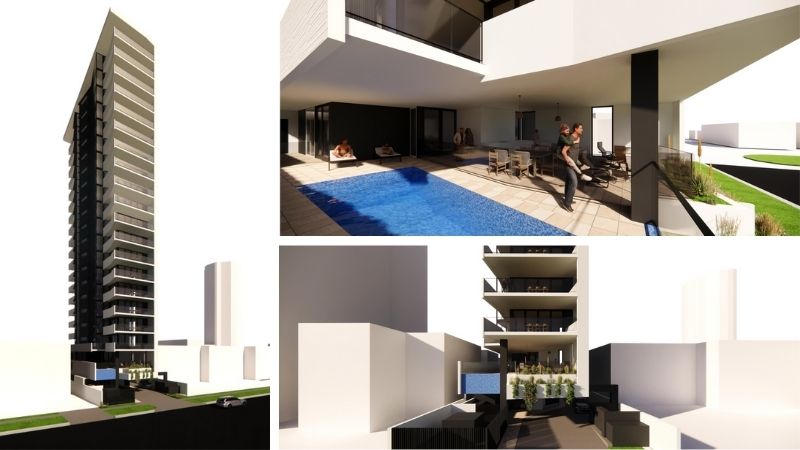 ▲ Renders of the Morris Group’s latest tower proposed for a site on Chelsea Avenue, Broadbeach on the Gold Coast.

“We’re not at that point yet, we haven’t had that sort of check in the market but I do think it’s coming because there'll be more projects that won’t start.

"But what projects have you actually seen commence construction lately? That’s always a good test. What new cranes do you see going up? ... there's not many at the moment.”

Morris Property Group currently has four projects at varying stages of the development application process with the Gold Coast City Council and is soon to file documents for at least one other project.

The proposals include a recently lodged DA for a slender 20-storey residential tower on a 607sq m block at 22 Chelsea Avenue, Broadbeach.

It comprises 18 whole-floor apartments with a ground floor lobby and a communal recreation deck-pool space on the second level.

The Burling Brown-designed tower would result in “an innovative outcome within the constraints of a tight site”, according to the submitted design statement.

“The modernist form and use of angles will identify this memorable project in the Broadbeach skyline adding yet another positive statement to the urban fabric,” it said. 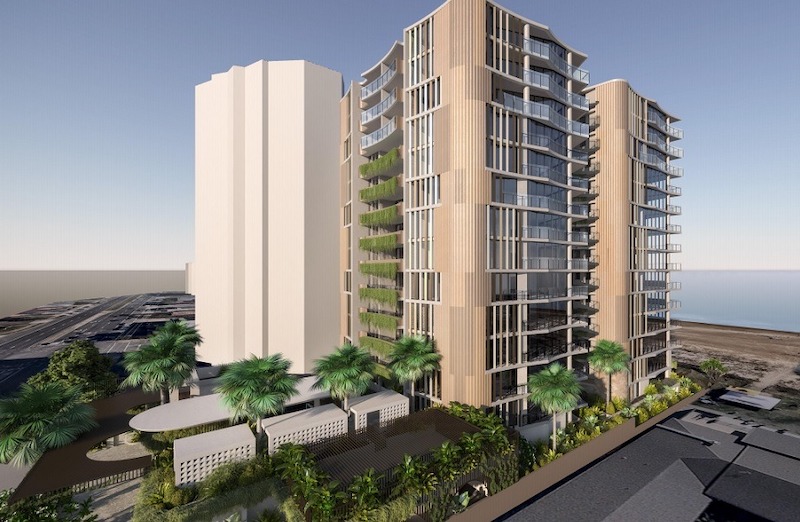 ▲ A render of the Alegria residential tower project at Palm Beach—the project has been canned due to costs blowing out.

Morris said from the data he had seen he believed the record-breaking Gold Coast apartment boom had hit its peak in October, 2021.

“Right now, however, we don't actually have any hard evidence ourselves,” he said.

“We'll find out in the next few months what the real state of the market is because we'll be releasing some two-bedroom, two-bathroom product, which has the broadest appeal.

“I’m not expecting it to be like it was in the fourth quarter of 2021. It’s definitely softened a bit.

“But we're playing a long game, so we’ll take our projects to the market ... all our locations are good, it just may take a little longer to get the level of pre-sales.”

The latest report compiled by property consultancy Urbis indicated the Gold Coast’s record run of apartment sales has cooled with numbers for the first three months of the year falling to pre-Covid levels.

Its data showed 377 new apartment sales were recorded in the March quarter, about 38 per cent down on the previous three months and about half that of the same time last year.

Based on the current quarterly sales rate, however, the Gold Coast still has just 3.3 months of supply remaining.