Ravenous build-to-rent developers are swarming Melbourne in a bid to secure sites as the asset class heats up despite prevailing headwinds in costs and construction.

There is no denying the institutional investor appetite for the burgeoning asset class has hit fever pitch as developers and landowners report build-to-rent developers circling inner-city sites.

Buxton family-backed Corsair Investment Management executive chairman Michael Fowler confirmed the fund manager had been approached directly by a number of build-to-rent specialists for the 500-apartment build-to-rent portion of a $500-million, mixed-use precinct in the Alphinton Paper Mill precinct.

Corsair entered a joint-venture partnership with Time & Place as the developer for the 20,660sq m site, which Corsair acquired for about $48 million.

The MaxCap co-founder said they may put the build-to-rent aspect of the mixed-use precinct out to tender.

“We’re seeing the build up of the wave of build-to-rent … it’s a really long point break, but things are really starting to build,” Fowler said.

“We like build-to-rent, we think it's got a fair way to go.

“We’ve got a really high-calibre developer in Time & Place, and the Buxton family has five generations of property experience. They have been financing other projects with Time and Place.”

Revised plans for the Alphington mixed-use precinct are due to go to the City of Yarra Council next month to support the inclusion of affordable housing as part of the six-tower development atop a retail podium, with provisions for traditional and co-working office spaces and a community precinct. ▲ The 16ha parcel of land on Heidelberg Road, which formerly contained the Alphington Paper Mill, is one of the major mixed-use redevelopment sites in Melbourne.

Time & Place director Tim Price said the development would be focused on creating a “true neighbourhood”.

“The area as it stands is predominantly residential,” Price said.

“Our build-to-rent offering anchored by a Village Precinct will go further to both fostering a greater sense of community through shared spaces while also adding a diverse mix of housing options,” Price said.

“The inclusion of affordable housing is also important to us—Time & Place supports the provision of quality living opportunities that are attainable for all financial levels.”

He said the US and European markets had increasingly migrated to non-bank lending and he expected this would take root in the Australian market into the future.

Fowler said global instability and the ongoing construction crisis were playing into investment decisions but said he expected the property industry to remain resilient and deliver value.

Time & Place hopes to break ground on the project by the end of 2022.

Headwinds will not deter build-to-rent in 2022

“Very few true purpose designed build-to-rent developments have been completed and released to market for rent—but this will change in 2022,” Ellenby says.

Ellenby says housing affordability and the recent property boom had pushed prices out of reach for many people, placing upward pressure on rents and vacancy rates.

He says many industry players will be following the pace of uptake on leases in build-to-rent developments as they come to market.

But Ellenby says there are some significant teething issues ahead for developers tapping the sector.

“Scale and opportunities for investment, along with locating experienced management with Australian local market knowledge, will continue as a headwind.

“If demand for traditional residential apartments continues to rise, competition for build-to-rent sites will escalate and combined with increased construction costs, this will cause new build-to-rent projects to face increasing pressure to financially stack up.”

Ellenby says the competition could grow fierce for development-ripe sites in inner-city areas with access to public transport and the amenity of parks nearby. 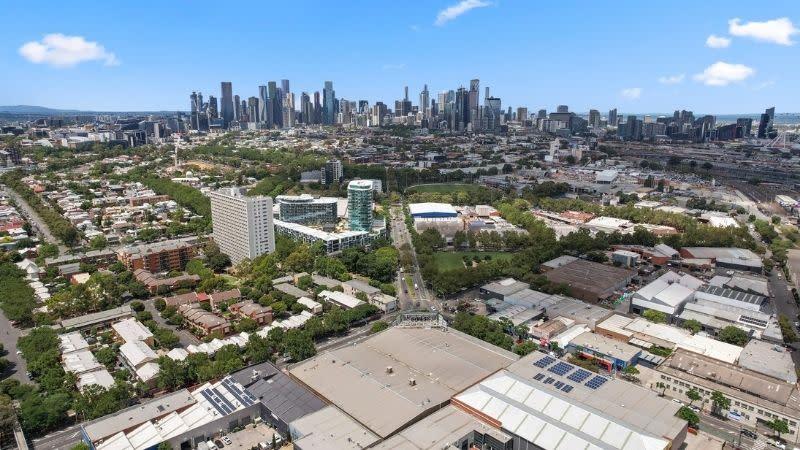 ▲ A hotly-contested site on Macaulay Road in North Melbourne is expected to fetch $50 million.

An expressions of interest campaign for the sale of a 7811sq m site at 218-241 Macaulay Road in North Melbourne, the unofficial heartland of build-to-rent sites, has been hotly contested with price expectations in the region of $50 million.

Cushman & Wakefield sales agent Lukas Byrns said the family who owned the commercial property had been approached directly by build-to-rent groups on the hunt for sites in the 90ha Macaulay Renewal Precinct.

Concept plans for a 443-apartment mixed-use development have been drawn up for the site.

“We are dealing with a wide range of investors and developers, often backed by global institutions, all with a strong desire to place capital into build-to-rent projects in Australia with almost 60 per cent of the total number of build-to-rent projects either under construction or planned in Melbourne,” Byrns says.

“We have already experienced significant interest from apartment developers and build-to-rent groups, given its prime location and outstanding views, this is by far the best located site in North Melbourne.”