A bold plan to build Brisbane’s first “townhouse in the sky” development will test the city's appetite for a new style of split-level living.

Sydney-based developer Pyco Group has won approval for its Nouveau apartment building on Anstey Street at Albion, featuring arched terraces and a brick foundation that reflects the industrial heritage of the suburb.

Realm Projects managing director Shane Foley, who is project marketer for the development, says the townhouse in the sky concept is the first of its kind in Brisbane.

“This hasn’t been done before in Brisbane, it’s uniquely designed for this site,” Foley says.

“It’s taken that traditional concept of a townhouse and put it in an apartment building.”

Pyco Group director Lachlan Cottee says the 42 two-storey sky homes would leverage the hilltop position in the burgeoning area to capture views across the city’s skyline.

Cottee says Pyco Group beefed up the size of the development after managing to acquire the four neighbouring lots over 18 months to create the eight-storey tower.

“I’m trying to build something I would want to live in,” Cottee says.

“We can deliver something that’s just as good as a traditional Queenslander but for a fraction of the price. ▲ The planned development is a first of its kind for Brisbane, according to Pyco.

“The concept is there is this missing middle market which is a real gap in what is being offered. Nouveau provides for a market looking for the lifestyle and amenities of an inner city location and the space of a house but who can’t quite afford both.”

Cottee says they are aiming at the downsizer and professionals buyer market, as well as young families.

“We believe we can deliver a two-storey, split-level apartment in a great location. My first development was in Brisbane, we’re confident in that market,” he says.

“Originally we started with a view to fill a gap for Sydney investors. We have a lot of investors looking for good yield, high value stock. Originally we were building stock to fill that need in Chermside and Cannon Hill.

“Obviously there’s times where the investor market isn’t very strong, and it looks like we’re heading into one of those periods, so being able to adapt and fill both sides of that buyer demographic is important.

“Our last project, the Bailey, was a 50-50 split between investors and owner-occupiers. But we think Nouveau will be mainly owner-occupier targeted.”

DAH Architecture owner David Hansford has brought his insights from low-density residential design to this project to create homes in the sky.

Hansford says it is more complex to create the split-level apartment floorplates and they have been working on the plans for about 12 months. 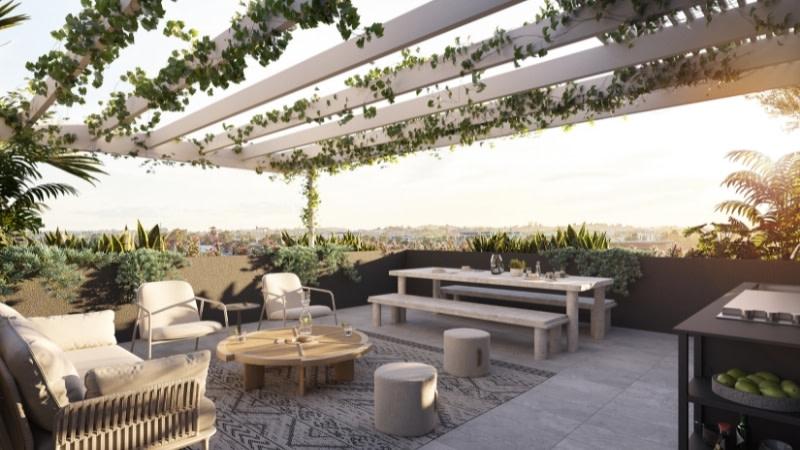 “We had been looking at sites specifically for the sky homes concept for a while now.  I think to a certain degree it was about the corner site,” he says.

“We do a lot of high-end low density residential projects, and a lot of designing Nouveau has been taking those things and bringing it to apartment living. It’s townhouse outcomes in an apartment.”

Hansford said the double height living areas and outdoor entertainment space were a drawcard for the unusual apartment floorplates.

“When you look at the renders of Nouveau it looks like a four-storey building, the facade breaks up the massing,” he says.

“Everyone wants double-height outdoor entertainment areas, and you’re achieving that in an apartment.

“And between the views, the cafes and the urban renewal of Albion it will be a really cool little precinct.”

Foley says the Nouveau project will provide house-sized floor plans at a more accessible price point, with prices starting at about $1.15 million.

“If you went back three years ago you could buy a house for $1 million in the surrounding area. Now the entry point is really $1.5 million, that’s cut out a significant portion of the market.

“Albion has been undergoing a tremendous transformation. It has a thriving cafe culture and a lot of regeneration going on with breweries and restaurants near Crosby Park.” ▲ The inner suburb of Albion is growing in popularity as it shrugs off its industrial past.

The project will be launched soon after already receiving off-market interest and about 15 expressions of interest and it should break ground by the second quarter of 2023.

Pyco Group also has plans in the works for another apartment development on Vulture Street at West End.

Nearby, Alceon has undertaken early demolition works on the redevelopment of the iconic brutalist office tower on the hill at Albion, as part of a $200 million mixed use precinct.

The precinct will have a residential focus, with a newly-planned building comprising 77 apartments over 10-storeys. The planned 7-storey commercial tower will provide 5600sq m of office space.

Also in the suburb, Brisbane-based developer Geon Property won approval for the first stage of its $750-million Albion Train Station precinct redevelopment in 2020.

The Albion Exchange development is to be delivered over 15 years to repurpose a 4900sq m state government-owned development site running adjacent to the existing Albion train station.