Jeff Xu’s Golden Age Group has been given the final ministerial tick of approval to develop a 21-storey tower within Melbourne’s historic Queen Victoria Market precinct.

Construction of the $150-million development on a 1016sq m site at 432-450 Queen Street is expected to begin in the second half of this year.

The Bates Smart-designed tower—to be known as 450 Queen Street—was endorsed by the City of Melbourne in June last year and recently given the go-ahead by planning minister Richard Wynne.

The green light has been granted despite concerns over the precinct’s redevelopment and fears surrounding high-rise projects will “overshadow”, “homogenise” and “kill” the market, which has been operating for almost 150 years.

Under the approved plans, the existing building on the site will be restored and integrated into the development.

The new 67m tower will comprise 129 one- and two-bedroom apartments, with 10 per cent allocated for affordable housing, as well as three lower levels of retail space. 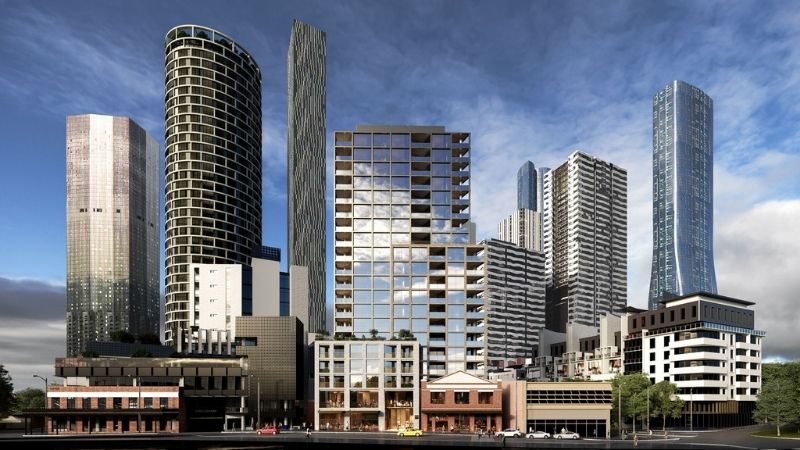 ▲ Under the approved plans for Golden Age Group's new 21-storey tower, the existing building on the Queen Street site will be restored and integrated into the development.

Bates Smart director Julian Anderson said the project’s design was undertaken “with residents, visitors and the market community in mind by providing engaging spaces to live, work and play”.

“We have taken great care in designing an enduring and well-crafted addition to this neighbourhood, respecting the site’s historical context while being mindful that this development will have a role in shaping the future character of an evolving and diverse urban fabric,” he said.

Anderson said masonry would be applied to podium forms to complement the existing building and vitrine windows incorporated into the ground-floor retail as a contemporary interpretation of shopfronts in the market precinct.

Also, a triple-height, north-facing atrium would provide natural light and activity to the lower and upper ground retail tenancies, he said.

“Receiving approval is a reflection of the level of confidence the state government has in us as co-developers of this city,” he said.

“The project is located in a significant area of the Queen Victoria Market precinct and we’re excited to develop a project that will further contribute to this ever-evolving pocket of the city.”

The council endorsed the development last year with some amendments, including the retention of more of the heritage facade.

At the time, City of Melbourne deputy lord mayor Nicholas Reece rejected claims the proposed tower looked like “a spreadsheet in the sky”, saying it was a high-quality development that would add value to the area.