Australia has caught on to the trend of building taller in timber, with other plans for three buildings from 180m to 220m submitted in Perth and Sydney. These would more than double the current world record for a timber building.

Tall timber buildings, made entirely of mass timber [layers of wood bonded together] or steel-timber and timber-concrete hybrid construction, are gaining popularity worldwide.

Every couple of months a yet taller timber building seems to pop up somewhere. My colleagues and I joke that we have stopped trying to keep up.

Timber is a sustainable, renewable material that stores carbon while in use, and the appeal of using it in skyscrapers is clear.

But I worry that focusing only on the tall means we overlook the “middle”: apartment buildings, hospitals, schools and shopping centres.

Buildings such as these are dominated by concrete, steel and brick, all of which are carbon or energy-intensive materials.

The “middle” is not sexy, and probably won’t make the news but it’s where timber construction can have a significant sustainability impact. 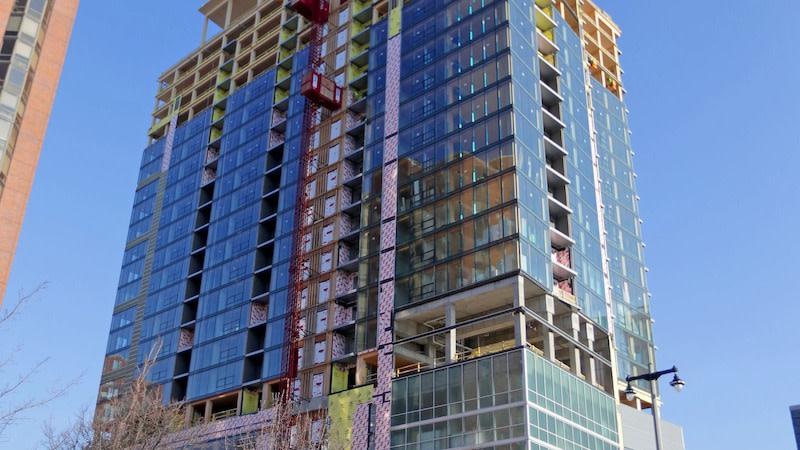 ▲ The current tallest timber tower in the world, Ascent in Milwaukee in the US, under construction.

A 2017 study found Australia’s construction sector is responsible for 18 per cent of the country’s carbon footprint. Current emissions are expected to double by 2050 if we don’t change the way we build.

Change is challenging. Developers and designers favour familiar construction materials and methods where cost estimates are straightforward. Timber requires a change of thinking and early contractor involvement to be cost-competitive.

But if we truly want to do something about our nation’s carbon footprint, the whole construction industry urgently needs to shift, with Australian government support, towards renewable, low-carbon construction materials and methods.

This means to build with timber if we can, use steel and concrete if we must.

Mass timber is more homogeneous than sawn timber, resulting in higher strength, and allowing us to build taller than ever before. Australia’s third CLT plant is set to open in 2023 in South Australia.

Globally, timber has reached new heights during the past 15 years. Noteworthy projects include the University of British Columbia’s Brock Commons student accommodation, 53m high and made of mass timber and concrete.

The tallest timber building until recently was the 85m Mjøstårnet in Norway, made entirely of CLT and glulam. It lost its title to Ascent, an 86m, 25-storey, timber-concrete tower in the US.

Another interesting “tall-ish” timber building is Monterey Kangaroo Point luxury apartments in Brisbane. The developers Gardner Vaughan opted for a relatively lightweight solution of CLT and a single concrete core as the building stands above the Clem Jones Tunnel.

Australia is determined to go tall in timber. The University of Queensland’s Future Timber Hub is studying how to build taller timber buildings, including extensive research on fire safety. Better understanding of fire behaviour has driven a change in legislation, lifting height limits on timber buildings and boosting developers’ confidence to plan much taller buildings.

Building tall in timber is an art, technically challenging, and exciting for engineers and architects alike. I know this since I researched the seismic design of connections in tall timber buildings for my PhD.

I am still involved in tall timber research with the Council for Tall Building and Urban Habitat, and European research on the Holistic Design of Taller Timber Buildings.

And what’s not to love about timber? It practically grows itself, stores carbon in durable wood products, can be cascaded into other timber products, and used as fertiliser for sustainable forests at the end of its life.

But building taller and taller timber buildings alone isn’t the answer to the climate crisis.

In 2011, Forest and Wood Products Australia (FWPA) reported on the opportunities and constraints of timber construction. Its report identified multi-residential, educational and office buildings as having the biggest potential for building with timber.

Almost all of these buildings are still being constructed out of concrete and brick. Despite efforts to make both materials “greener”, their production currently consumes vast amounts of non-renewable resources and emits a lot of carbon.

So what’s stopping us?

FWPA’s report identified the biggest problem as a lack of timber construction expertise. This is not surprising, since Australian universities offer hardly any timber courses. 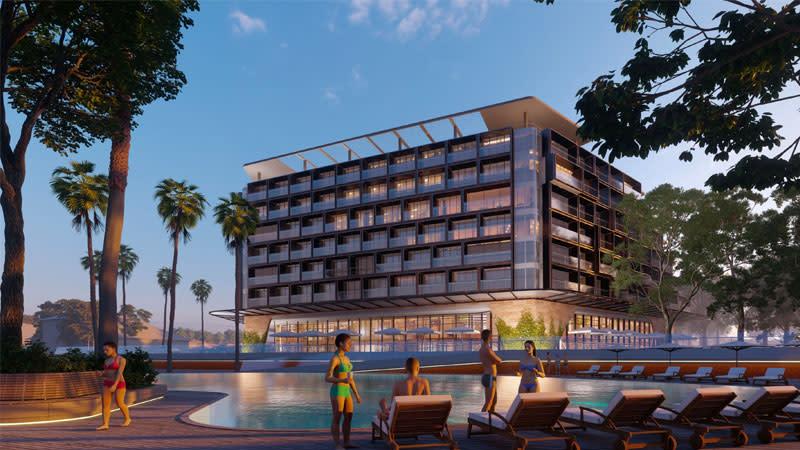 ▲ A render of the planned timber-based development, a 164-room hotel and 49 apartments in Whyalla,SA. Image: Cox Architecture

In response to the construction industry’s lack of timber knowledge, WoodSolutions, the educational branch of FWPA, has been running an entire mid-rise advisory program. It allows those exploring mid-rise timber solutions to get free information and advice from a group of experts.

Advancing structural timber engineering education is only one piece of the puzzle. We also need a shift of mentality to move past the idea that timber can only be used in detached single-family homes. In fact, we need to move away from such homes altogether. The federal HomeBuilder grant scheme led to a nation-wide timber shortage and added to urban sprawl.

Instead, we need to embrace well-built, mid-rise apartment buildings made from engineered timber. This material can safely use lower-grade wood and take the pressure off timber supplies.

And why stop there? We have the tools and the knowledge to build high-performance timber buildings. Proper design and detailing can slash energy bills.

Tall timber buildings are exciting, and we shouldn’t stop dreaming tall, but we need to focus on the missing middle to make construction sustainable.