The Star Entertainment Group is set to break ground on a 63-storey mixed use residential and hotel tower at its $2 billion masterplanned site at Broadbeach Island on the Gold Coast.

The approved $400 million tower, to be built on the most south-eastern part of Broadbeach Island, will feature 210 five-star hotel rooms and 457 apartments.

Multiplex will commence construction in early February with approximately 2,300 jobs expected to be generated over the project’s three year construction timeline.

The tower will join the $400 million, 53-storey Dorsett hotel and apartment tower which is due for completion in 2022.

It will be developed adjacent to The Star Gold Coast casino with its existing refurbished 596-room five-star hotel.

When realised, The Star Broadbeach Island masterplan will comprise 3,000 hotel rooms and apartments, conference facilities, as well as a number of cafes, bars and restaurants.

It is the second major project in south-east Queensland for the joint venture partners which are currently in the throes of delivering the $3 billion Queen's Wharf integrated resort and residential development in central Brisbane. 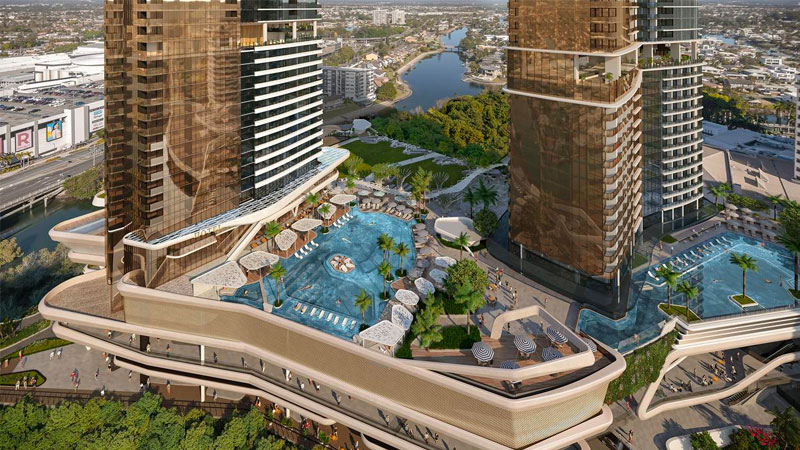 ▲ The project will feature a day spa, wellness centre and sundeck with a large lagoon pool, private cabanas and dining areas.

The Star chairman John O’Neill said the decision to proceed with the masterplan’s second tower was a show of confidence from the consortium.

“While we continue to work through and manage the serious impacts of domestic and international border restrictions on our business and the industry more broadly, the decision to proceed with our second tower is part of our unwavering commitment to the Gold Coast.

“We all know how strongly the Gold Coast resonates as a premier holiday location, particularly for those from the southern states.

“There is also a growing number of Australians who want to work, live, and play here.

“It all helps underpin our confidence in the Gold Coast and south east Queensland tourism,” O’Neill said.

The tower’s hotel will span 14 levels above the buildings six-level podium while residential apartments, ranging from 55sq m to 168sq m, form the upper levels.

It is understood, 70 per cent of the one, two, and three-bedroom apartments on offer within the project have already been sold since pre-sales began in May 2019 with prices ranging between $596,000 and $1.8 million.

The tower’s retail offerings will combine with the Dorsett hotel and apartment tower via a connected concourse featuring more than 12,050sq m of retail and resort facilities.

The Star and the Queensland government had been in talks over an exclusive 30-year casino licence to operate on the Gold Coast.

The end of the talks with the Queensland government come after Star finalised a deal with the NSW government to give it exclusive licence for poker machines in NSW over the next 21 years, until the end of 2041.