The New South Wales government has awarded a $2.1-billion contract to deliver the next stage of the Sydney Metro West project.

The Gamuda Australia and Laing O’Rourke consortium will take charge of the tunnelling contract to deliver a 9km kilometre section of the project comprising twin metro rail tunnels between Sydney Olympic Park and Westmead.

Gamuda and Laing O’Rourke were selected ahead of a consortium made up of John Holland, CPB Contractors and Ghella Australia.

Gamuda, a $3.7-billion engineering, infrastructure and property giant, employs about 5000 people and is listed in Kuala Lumpur.

It is the second major tunnelling package awarded on the infrastructure project, with work already underway to deliver twin tunnels between The Bays and Sydney Olympic Park following the contract awarded to Acciona Ferrovial joint venture last year.

Sydney Metro West is a new 24km metro line that will connect greater Parramatta and the Sydney CBD.

As part of the project, stations will be built at Westmead, Parramatta, Sydney Olympic Park, North Strathfield, Burwood North, Five Dock, The Bays, Pyrmont and Hunter Street in the Sydney CBD. 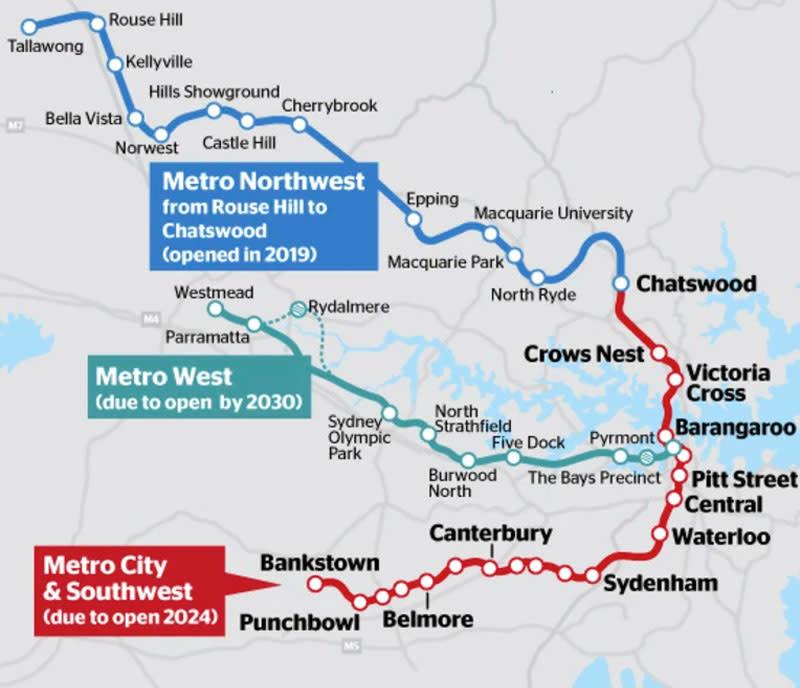 ▲ Due to the scale of this city-shaping mega project, the tunnelling and excavation works have been separated into geographically specific contract packages.

The consortium is expected to break ground by mid-2022 with a tunnel-boring machine expected to launch from Rosehill, tunnelling toward Sydney Olympic Park before relaunching towards Westmead.

Completion of the contract is expected by the end of 2025.

The eastern tunnelling package is the third and the final section of tunnelling for which the state government has shortlisted prospective contractors.

The eastern tunnelling package will involve tunnel-boring machines cross under Johnstons Bay alongside the Anzac Bridge, before heading to the new Pyrmont station and then down and under Darling Harbour before reaching Hunter Street in the heart of the CBD, in between Wynyard and Martin Place.

The final tunnelling package contract is expected to be awarded by the end of 2022.

Further west, the state government has also awarded the contract for the Western Sydney Airport line as part of the new Sydney Metro.

The $540-million contract to deliver approximately 10.4km of surface and civil alignment works was handed to CPB Contractors and United Infrastructure.

The driverless 23km metro line will link St Marys to the centre of the new Aerotropolis at Bradfield via the new Western Sydney International Airport. Six stations will also be built along the alignment.