Plans for a 17-storey apartment tower have been filed for a prominent Sydney CBD corner site previously earmarked for a hotel redevelopment.

The proposal comprises 14 whole-floor three-bedroom residences, including a three-level penthouse, and a nine-level basement for car parking.

It has been lodged by CDMS Pty Limited and designed by Candalepas Associates for a 248sq m site at 41-45 Erskine Street, also known as 299 Kent Street.

If approved, it would replace a three-storey office-retail building built in the 1950s. The site has been occupied by commercial buildings since the 1800s but is not heritage listed.

The latest proposal follows approval of redevelopment plans for a 16-storey three-star hotel with 93 rooms by Sydney-based TWT Property Group. It also was designed by Candalepas and with a similar building envelope.

According to the filed architectural design statement, the building will have “richly articulated facades that utilise masonry elements consistent with the historical character of the Sydney CBD”.

“The proposed built form and scale of the development is considered to align with adjacent neighbouring context positively contributing to a coherent urban form,” it said.

“Significant fenestration, articulation and visual relief occurs at all levels … corresponding with the form and horizontal articulation of nearby buildings. 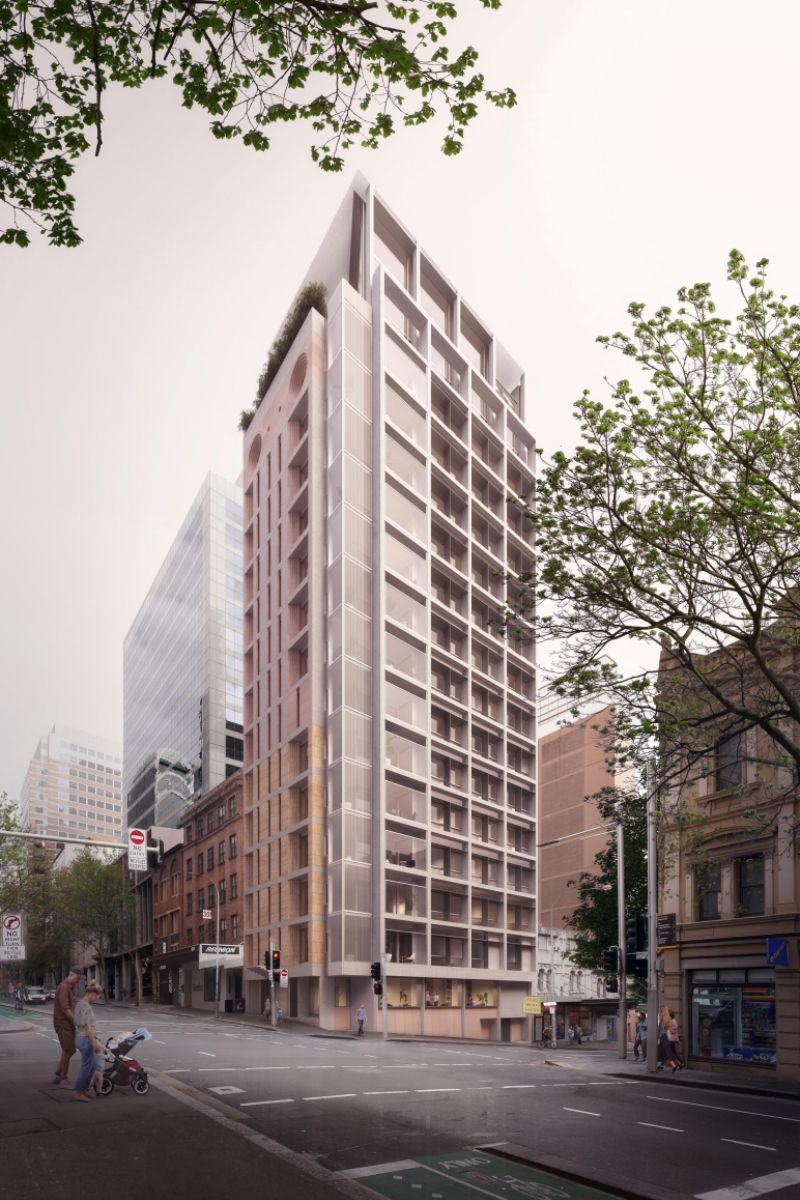 ▲ Render of the 17-storey apartment tower proposed for the corner of Erskine and Kent streets in the Sydney CBD.

“The facades are comprised of sandstone and light beige granite cladding with detailed framing elements in a brass tone.

“Complementing this, metal box framed windows protrude within the facade depth as a contemporary gesture to the street, ensuring a both delicate and robust architectural expression.

“The tower’s proportion and setbacks, including its street facing facades, provide a complementary addition to the streetscape.”

According to documents, the building has been designed to provide “an exceptionally high level of amenity for occupants with large open-living areas and northern orientations”.

All the apartments will feature dual eastern and northern aspects with a terrace to the north-east to maximise solar access and ensure cross ventilation.

A multi-purpose communal facility at ground level will cater to a variety of user activities and will be capable of being divided into a series of smaller spaces for use by residents.

Basement parking for 14 vehicles along with seven motorcycle spaces will be accessible via a car lift and a car turntable will be installed to ensure safe and easy access to designated spaces.