South-East Queensland property developer Gardner Vaughan Group will build in its own backyard with plans to reinvigorate an underused corner block in Nundah.

Gardner Vaughan Group, which recently won The Urban Developer award for  Excellence in Construction for its timber tower at Kangaroo Point, acquired the two sites at 1175-1181 Sandgate road for about $4 million late last year.

A GVG spokesman told The Urban Developer the existing retail shopfronts on the corner block had been offered up rent-free to displaced retailers from Toombul Shopping Centre, which went under in floods last month.

It has now lodged plans with the Brisbane City Council for an 11-storey apartment tower with office space to accommodate its growing team.

The development, to be called Danby Lane, would comprise 49 apartments and a rooftop garden, with a level 1 tenancy for GVG’s office.

The 1424sq m site fronts Sandgate and Buckland road and the existing one- to two-storey commercial buildings would be demolished to make way for the development in 2023.

A GVG spokesman said the penthouses on Level 9 could go for as much as $3 million.

“Gardner Vaughan Group are proud Nundah residents ... we will also be the builder on this project,” he said.

“We would like to think we can improve the suburb by delivering a design and quality that uplifts property value and more importantly community engagement. We are very excited to have the opportunity to deliver Danby Lane to Nundah.” 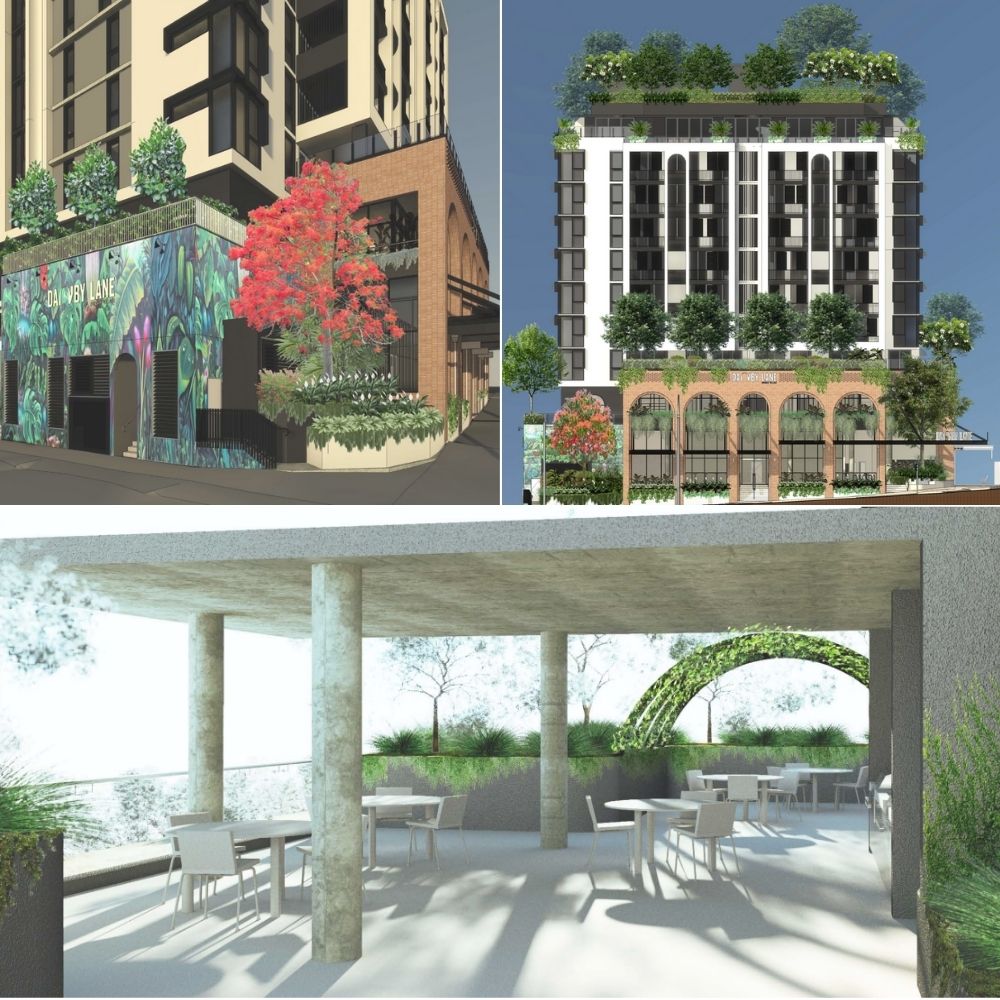 ▲ GVG's Danby Lane development would include a painted mural on the Danby Lane side of the development—the developer is approaching nearby businesses about being involved in the public art project.

“The development proposal has been designed with careful attention being paid to urban design principles with particular reference to the two-storey street building which reinforces and enhances the character of Nundah village, particularly along Buckland Road and Sandgate Road,” the design report said.

“A large mural is also proposed to the Danby Lane frontage to the lane way to enhance the pedestrian realm upon entering Danby Lane … landscaping has also been interwoven throughout.

“Gardner Vaughan Group’s design intent is to provide a high-quality mixed use outcome for the Nundah Village.

“The quality in commercial space, streetscape, community amenity and building form all assist in creating a building that further invigorates Nundah and reinforces the streetscape character of Nundah Village. “

According to GVG documents, the proposed height is to allow sufficient scale to incorporate retail and commercial space to manage risk and increase economic viability of the project.

The mixed-use tower could help to reinvigorate the area, which is presently characterised by a number of vacant shops.

A GVG spokesman said they would not break ground on the project until next year.