New home sales rose 11.1 per cent in October as conditions in NSW, Victoria and the ACT continue to stabilise post lockdown and the post-HomeBuilder hangover fades.

Latest Housing Industry Association figures show new home sales across the five mainland states are continuing to strengthen, buoyed by increased household savings during the pandemic and a deepening preference for lower-density homes.

The strength of the new home sales has not been uniform, however, and performance of different markets continues to vary.

Sales in April suffered a hefty 54 per cent slump after HomeBuilder wound up in March, jumped by 15.3 per cent in June, before tailing back to 5.8 per cent in August and 2.3 per cent in September.

HIA economist Angela Lillicrap said new home sales since April were now at their strongest point since 2017 when construction began on more than 115,000 detached homes.

“This indicates that the strong level of home building activity under way will be sustained throughout 2022,” Lillicrap said.

“Demand for new homes continues to exceed the capacity that the industry can deliver [and] this is evident in the volume of work approved but not yet commenced, which is at its highest level in over a decade.”

In the three months to October, sales increased in Western Australia by 45.8 per cent compared to the same period in 2019.

Sales declined in South Australia by -1.3 per cent and Victoria by -7.5 per cent over the same period.

Owner-occupiers continue to dominant demand and regional areas have seen the greatest increase in building approvals this year. 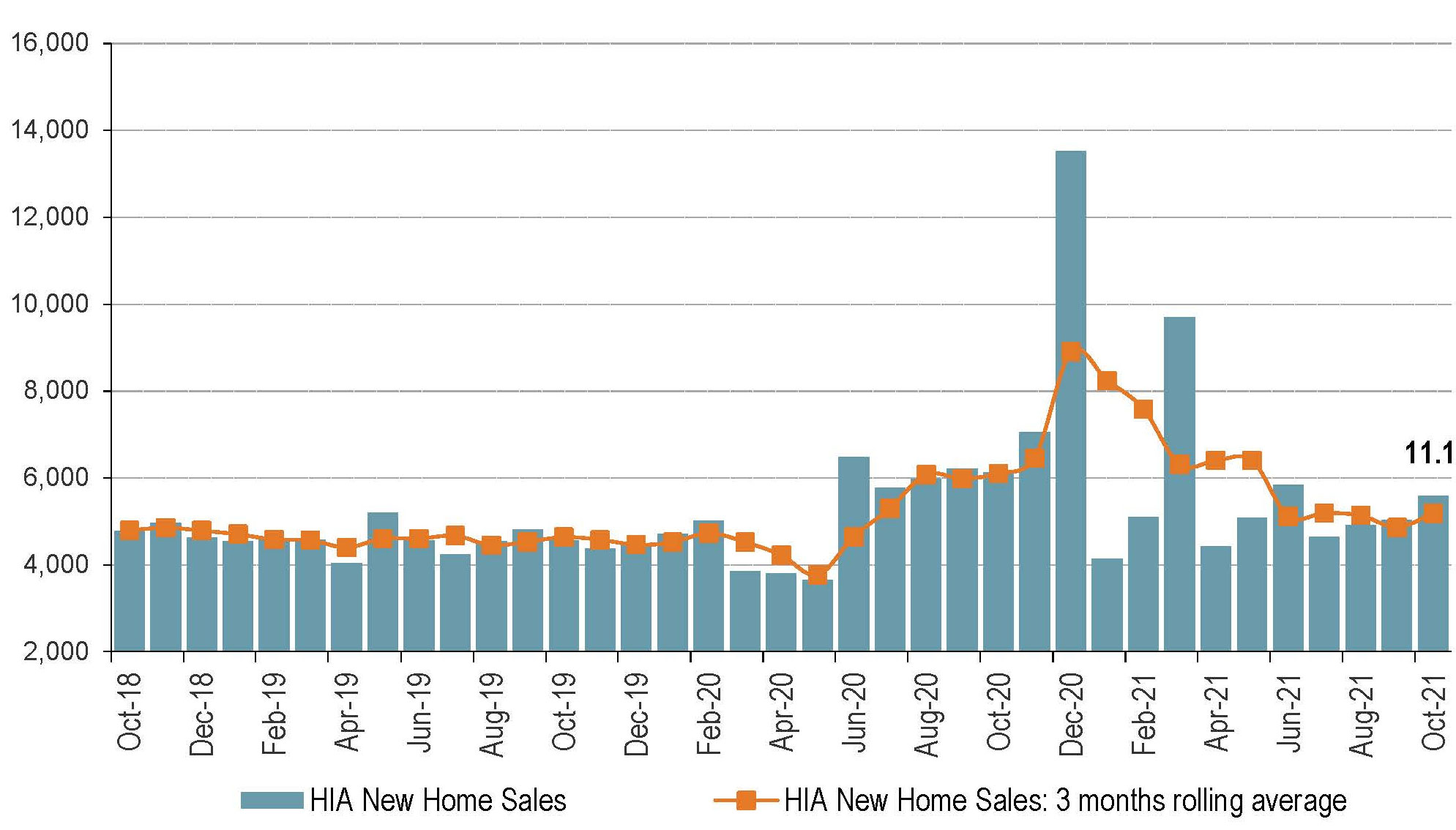 “Following a rollercoaster of sales over the past 18 months with the adverse impact of Covid lockdowns and then the HomeBuilder stimulus, sales of new detached homes in the three months to the end of October were consistent with the previous three months,” Lillicrap said.

“This suggests that the market is finding it’s new post-Covid equilibrium [and] this new equilibrium is very strong.”

“The ongoing demand for detached home building will continue to create strong employment opportunities throughout 2022 and into 2023.”

The federal government’s decision in April to allow a further 12 months for work to start on dwellings contracted under the stimulus program—giving builders until September 2022 to begin work, rather than the end of September this year—has enabled more of the homes in the system to actually be built.

However, a worsening shortage of timber, steel and labour available across the industry is at a “critical” point.

Master Builders chief executive Denita Wawn said Australia was headed towards a cliff with timber framing production set to be short 250,000 house frames by 2035—the equivalent of the cities of Newcastle and Geelong combined.

“As the timber shortages of the past 18 months have shown, we cannot rely on imports to fill the gap when we have increased construction activity—we need to act now,” she said.

“State and federal governments need to seriously tackle the policies which will drive forward new plantings of the right types of trees at the right scale and in the right places,” Hampton said.

“Future generations of Aussie homeowners are counting on it.”