Just weeks after their Coalition colleagues were routed at the Federal election, NSW Premier Dom Perrottet and his treasurer Matt Kean have used the state budget to make the argument that they are a breed apart.

Ditching the hi-vis and hard hats, the 2022-23 budget has put the focus squarely on investing in humans.

Budgets in recent years have seen much discussion of NSW’s infrastructure pipeline, but childcare, healthcare, and household budget relief are the biggest priorities for the year ahead.

“If our state is to reach its fullest potential, then we must invest in more than just bricks and steel. We must invest in our people as well,” Kean told Parliament in his inaugural budget address.

“This should not only be the starting principle of our politics, it should also be the common sense of our commerce.”

Rattling off new measures, the treasurer made commitments totalling $7.2 billion towards family budget relief, $5.4 billion towards the healthcare sector, and $3.5 billion (in conjunction with federal funding) towards flood-affected communities.

While the treasurer flagged a return to surplus in the near future, after coronavirus and floods have pushed unexpected deficits on the state, he also argued that the government won’t be tightening the purse strings.

“Our covenant to future generations is about more than merely leaving them with the finances in good shape. It’s also about investing today, so that they may enjoy the returns of a more prosperous tomorrow.”

The budget projects a deficit of $11.3 billion in the year ahead, with gross state product to grow at 4.5 per cent. NSW should return to surplus in the 2024-25 financial year, with net debt to stabilise at 14 per cent of GSP in 2026.

However, there’s plenty in the budget for the property sector to chew over. The long-touted reforms to stamp duty, including the introduction of an opt-in land tax for homeowners, will be introduced as part of the package. 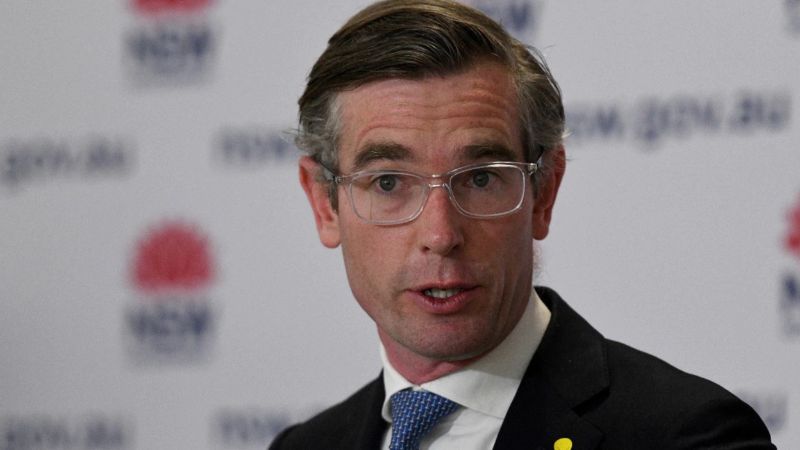 ▲ NSW Premier Dominic Perrottet: we must invest in more than just bricks and steel.

“We want to lower the barriers to owning a home for first home buyers seeking a place of their own,” Perrottet said.

“In the past two decades, the share of first home buyers under 35 years of age has declined from 67 per cent to 61 per cent. Lifting home ownership is part of this government’s efforts and ambition to help families who are feeling the squeeze.

“The First Home Buyer Choice will remove one of the largest upfront costs to buying a home and help deliver a brighter future for first home buyers.”

The new system will allow home buyers to elect whether they will pay a one-off stamp duty, or a smaller, on-going annual land tax. The budget projects that the transition will make a $729-million dent in the state’s finances, as lower revenues from reduced stamp duty are initially felt.

Properties worth up to $1.5 million are eligible, with fees set at $400 plus 0.3 per cent of the land value of the property annually. The property will not be locked into the land tax system when ownership changes.

Urban Taskforce chief executive Tom Forrest estimated that stamp duty on a property is the equivalent of 14 to 17 years of land tax under the scheme’s announced rate.

“While the property sector (and almost all economists) would prefer to see a wider application of the choice between stamp duty payments up front and a much lower level of annual land tax, we appreciate that without some Commonwealth support during the transition this is difficult for states to fund,” Forrest said.

“Providing this choice for first home buyers represents a good start and is an important step towards real and positive reform.”.

While the new scheme has been announced with other budget measures, legislation to institute it will only be introduced in the second half of 2022, with the start date projected for 16 January 2023.

Property investors that take advantage of the 1.5 per cent land tax discount for early payment will be disappointed—the discount will be lowered by two-thirds from January 1, 2023 to 0.5 per cent.

Budget papers forecast the reduction will generate $34 million next year, and $146 million over four years to 2025-26.

Separately, the government will also double the foreign investor surcharge land tax to 4 per cent. 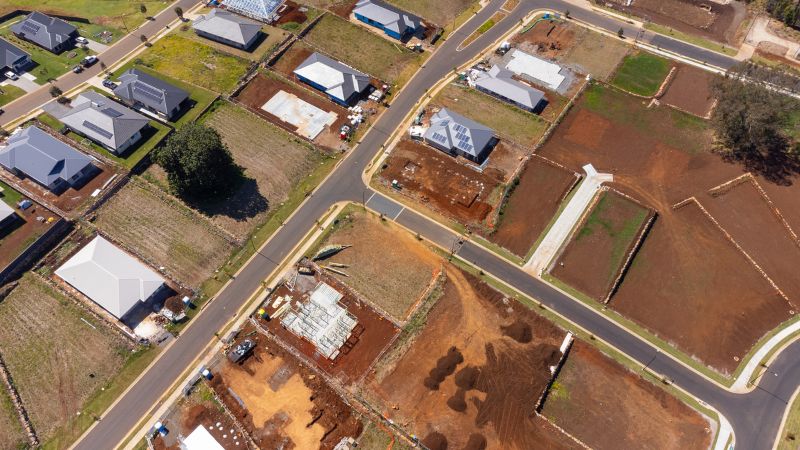 The budget also includes dedicated funding to a slew of measures aimed at improving equitable access to housing, with a comprehensive $2.8 billion package designed to speed-up approvals, unlock new land, and increase supply.

“This government will use every lever at its disposal—including tax, planning, supply, or working with the Commonwealth—to give more people in NSW the opportunity to own their own home.”

Spearheading the NSW government’s efforts to reshape the housing market is the $500-million 2022 Housing Package, including $300 million to accelerate infrastructure projects that enable new housing projects in Sydney and key regional areas.

The fund is targeted at filling out water and sewer infrastructure, roads, and parks in areas marked for new developments, and sits alongside a further $69.8 million to accelerate the rezoning of housing precincts for new homes.

But infrastructure funding will also be directed to regional centres where recent growth has seen demand for services outpace the rate of development. Another $33.8 million has been bundled in to address housing supply in regional NSW, intended to build a 10-year regional housing pipeline.

“One of the key recommendations from the Regional Housing Taskforce was the lack of infrastructure being built in our regional communities. This investment will help regional NSW keep up with current and future demand,” Roberts said.

“There is no doubt we are experiencing a housing supply crisis in NSW which is putting a strain on affordability, both in terms of ownership and rentals,” he said.

“We are some 100,000 homes short of where we need to be in NSW so it is timely to support the private sector in getting on with the job of building quality homes and beautiful communities for the people of NSW.” 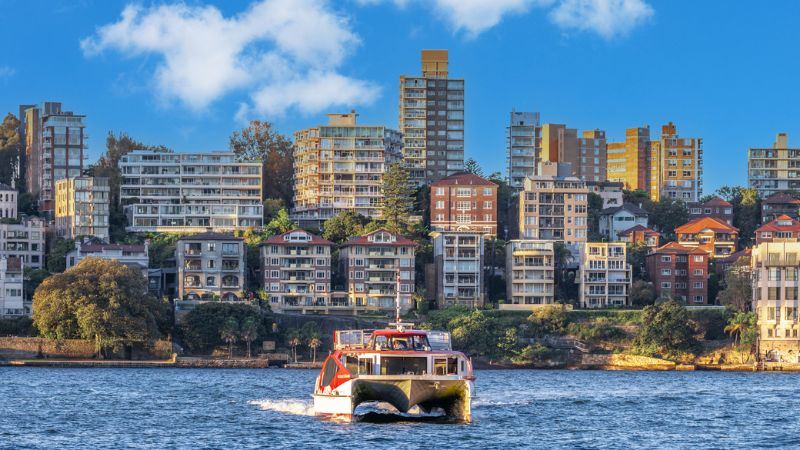 “There is an enormous difference between land that is simply rezoned and land that is ‘development ready’—the missing ingredient is enabling infrastructure such as water, parks and transport,” he said.

As well, $554.1 million is being poured into social housing, with plans to upgrade 15,800 existing homes—and building 200 new and 260 upgraded houses for Aboriginal families—as well as 120 social homes for rough sleepers.

Accelerated planning is a key focus of the government’s housing measures, with $89 million to be spent on speeding up planning assessments for new homes, and $3.8 million to build a new “call-in” team to assist with council-led rezonings.

“Prioritising planning assessments for new homes will make it faster for high quality planning proposals to be approved,” Kean said.

“We are anticipating hundreds of thousands of homes will be delivered sooner, through faster state and local rezonings and approvals.”

Shared equity pilot gets the go-ahead

While the federal Coalition pushed back on Labor’s proposed shared equity scheme, Perrottet and his team have leaned into the idea, stumping up $780.4 million for a trial.

Teachers, nurses, police, single parents and older singles will be eligible for up to 40 per cent funding from the government for a new property, or 30 per cent for an existing one. A 2 per cent minimum deposit will be required, with property values capped at $950,000 for Sydney and regional metros, and $600,000 for the rest of NSW.

Up to 3000 participants will be funded annually, with the pilot to kick-off in January 2023 and run for two years.

Budget for women, but construction lagging

In the lead-up to the budget, Perrottet and his team were keen to push initiatives tackling domestic violence, improving access to childcare, and anti-workplace harassment measures.

Kean’s budget speech to Parliament, delivered over the interjections of his infant son in the gallery, made explicit that this is a budget “about reform ... to break the barriers to women’s opportunity in this state” and “investing in the aspirations of women”.

Paying tribute to Brittany Higgins and Grace Tame, Kean used his address to outline the broad range of measures designed for women in the budget, with a particular focus on workforce participation.

By removing the 9 percentage point gap between women’s and men’s workforce participation, Kean argued, the NSW economy will be 8 per cent larger by 2060.

To achieve that, measures include $5 billion for an extra 47,000 childcare places across the state, and an additional year of schooling offered to all pre-kindergarten aged children. The government has also introduced a new paid parental leave scheme for public sector workers to encourage fathers to take up to 14 weeks leave. 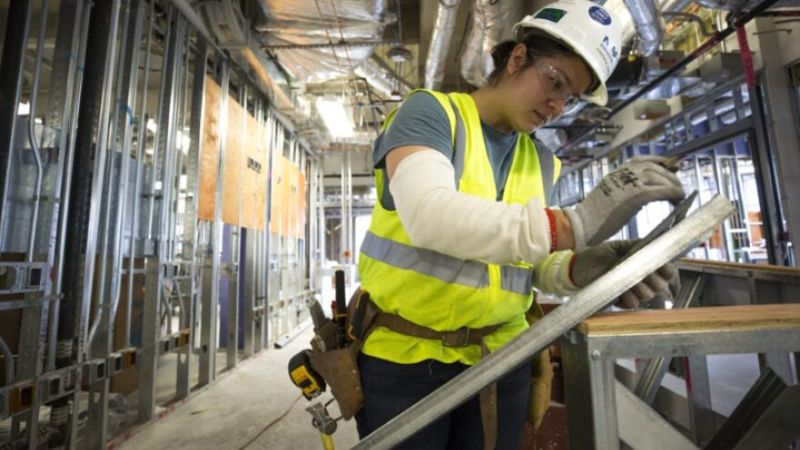 ▲ The NSW government intends to tripling the proportion of women in the construction industry in seven years.

In the construction sector specifically, the government has set itself the arduous task of tripling the proportion of women in the industry by 2030, from 5 per cent to 15 per cent.

“Historic skills shortages coupled with the biggest infrastructure program our state has ever seen means there is no better time to support more women to pursue a career in the construction industry,” infrastructure minister Rob Stokes said.

However, just $20 million has been allocated to the task—less than the $25 million to be spent on adding a third flagpole to the Harbour Bridge.

“This funding will go towards breaking down the cultural barriers that stop women from considering a career in construction and help them smash through the gyprock ceiling,” Stokes said.

Big ticket items have their place

Despite tightness in the labour market, rocketing input costs and shortages, and a construction sector struggling with razor-thin margins, there’s no shortage of large-scale infrastructure “mega-projects” in the 2022-23 budget.

“We’re transforming our state through roads and rail. Over the next four years, we expect to invest a record $112.7 billion in the state’s infrastructure pipeline,” Kean said.

Kean called out the 23 new and upgraded schools, 30 new ambulance stations, and 45 new or upgraded hospitals under way across the state.

The largest line items include an additional $8.3 billion for the Sydney Metro network and $1.2 billion dedicated to supporting renewable energy generation, much of which will go towards building transmission infrastructure.

Transport items include $500 million for a faster rail connection between Sydney and Newcastle, and $602 million to fund the second stage of Parramatta’s Light Rail.

“We are building a Western Harbour Tunnel, extending the M6, upgrading the Great Western Highway, and building a metro network for Sydney,” Kean said.

“These projects are the arteries of the nation.”