Since its inception six years ago, Nightingale said, it’s aim has been to reorient the housing market to focus on delivering quality housing for owner occupiers, rather than investors, with over 15,000 interested purchasers signing on to its database.

Nightingale was founded in 2016 with its first groundbreaking project Nightingale 1.0. The company has completed 12 projects to date and has a further eight under construction.

All of its developments are 100 per cent carbon neutral in their operations and meet a minimum 7.5 NatHERS rating, running on renewable power with no gas plumbing. They are also car free, where practical, and are located close to public transport and bike routes.

Nightingale chair Angela Perry said founder Jeremy McLeod had been intending to step away from the leadership role at Nightingale since June last year, but would remain involved in Nightingale as a board member.

“Jeremy’s role, along with his co-founder and partner Tamara Veltre, in establishing Nightingale as a real force in working to transform a broken housing market in Australia cannot be underestimated,” Perry said.

“His decision to move away from day-to-day Nightingale operations provides the opportunity for a generational leadership change, to build on the learnings of the past six years and consolidate the gains as the organisation plans a large slate of new developments across the country.”

Nightingale, a not-for-profit organisation providing socially, financially and environmentally sustainable architect-led projects, flagged last year that it intended to hire a new chief executive and transition towards a more conventional developer, albeit as a newly-minted not-for-profit.

At the time, McLeod said the cumbersome structure of equity investment by small investors in its projects, as well as the risk placed on individual architects to raise funds and complete projects, had forced the developer to rethink its model.

Prior to the rethink, Nightingale launched a claim of defamation against co-founder and former board member Andrew Maynard following a public attack on the not-for-profit group.

Maynard claimed Nightingale was lacking an experienced chief executive and a diverse membership and board of directors that reflected its community.

Nightingale rebuffed Maynard’s claims, saying that the organisation had achieved not-for-profit status, which was now enshrined in its constitution and precluded it from monetising the projects it built.

The developer’s new operating model, which it has tried on with projects in Melbourne, Adelaide and Sydney, is to partner with land owners to develop buildings with an agreed portion of affordable housing managed by a provider.

New chief executive Dan McKenna said he was excited to take the reins as Nightingale accelerated its move beyond its home base of Brunswick and into new places in Australia.

“I see my role as an evolution, not a revolution,” McKenna said.

“My appointment is part of a broader set of changes that are all about sharpening Nightingale’s focus on the thing that matters: getting Australians access to housing and making sure those homes are environmentally sustainable, well-designed and great places to live.”

Owners have recently begun taking moving in to apartments in Nightingale Village—a collection of six neighbouring buildings, each designed by a different architect, in Brunswick. 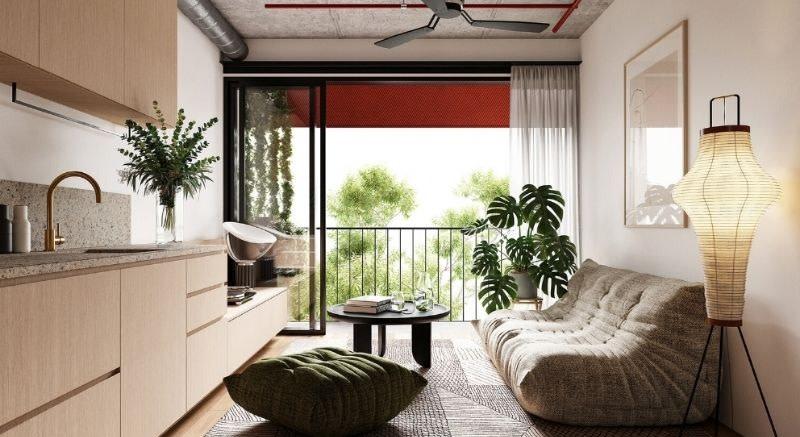 ▲ Nightingale has broken ground on its first Sydney project.

The masterplanned project, touted as one of Australia’s first medium-density carbon-neutral housing developments, is on Duckett Street.

Nightingale has also broken ground on its first project in Sydney, a build-to-rent project at Marrickville.

The SJB-designed development comprises 55 Teilhaus apartments, small-footprint homes that will be rented for 25 per cent less than market value. It will also include rooftop space for shared laundry, gardening, outdoor dining and socialising.

According to Nightingale, Marrickville tenants will be selected through a balloting process, where everyone who applies has a fair chance of becoming a resident. The ballot for Nightingale Marrickville is slated for closer to its construction completion in late 2023.

Meanwhile, another of its projects is nearing completion in Adelaide and the developer has recently completed an apartment project in Ballarat.It has more than 500 apartments in projects that have yet to be announced.