Twin-tower developments up to 30 storeys are popping up thick and fast in Newcastle’s West End with three major projects in the pipeline for NSW’s second-largest city.

Doma Group and Thirdi Group have development applications before the City of Newcastle council, while another significant apartment development is well on its way.

Both developers’ twin-tower projects have progressed to the public exhibition phase as West End continues to solidify its status as the city’s new CBD.

Doma is planning two towers behind the Newcastle Transport Interchange as part of the $130-million final stage at 854 Hunter Street, Newcastle West.

The Bates Smart-designed project adds 365 apartments, ground floor retail and office space across 28- and 30-storey towers immediately behind the interchange on the combined 8743sq m site.

It previously housed the heritage-listed the Store building and already has a carpark and 12-storey office tower built as part of development, which was given concept approval in 2019.

The towers, located next to the former Store, sit across a 3941sq m site at 924 Hunter Street. ▲ The Dairy Farmers Towers and Newcastle Interchange as it currently stands—both are along the new light rail line which has sparked the city's reinvention.

There are also plans to redevelop 711 Hunter Street, diagonally opposite the interchange, with St Hilliers and The Spotlight Property Group launching a design competition for the project.

The competition brief required two towers, approximately 90m high, with up to 250 dwellings and 1500 square metres of commercial floor space, at an estimated construction cost of $100 million.

“Newcastle is transforming into a modern metropolitan city, with significant redevelopment, particularly in the West End,” Bisson said.

“With both state and local government agencies relocating their offices to Newcastle’s revitalised West End, the area is now emerging as a new employment hub, with commercial businesses quickly following.”

Bisson said the growth of the area was also arising from public domain projects, private developments and the nearby Honeysuckle precinct by the Hunter River.

Despite the surge in new developments, the area has not been subject to any recent rezoning proposals and was primarily zoned B3 under the Newcastle Local Environmental Plan 2012.

‘All journeys start and end at the West End’

The real turning point for West End was the light rail, which started operating in 2019 with six stops from the Newcastle Interchange, at the end of the heavy rail line, to Newcastle Beach.

Thirdi director Luke Berry said in a week they had sold close to $60-million worth of apartments in the Dairy Farmers Towers thanks to demand for the area and its connectivity.

“I think that’s an indication of the product, the project and market of Newcastle. It’s on the cusp of its best decade in growth with investments and infrastructure,” Berry said.

“We’ve got a saying, all journeys start and end at the West End, and I think that’s been embraced by the community, a lot of local buyers and investors.

“With the evolution of light industrial to residential, we see that the West End is going to be that lifestyle cultural urban living precinct.

“It looks a bit dirty, grungy and interesting at the moment but the gentrification of the area off the back of the investments in infrastructure will be significant and add a lot of value in the future.” 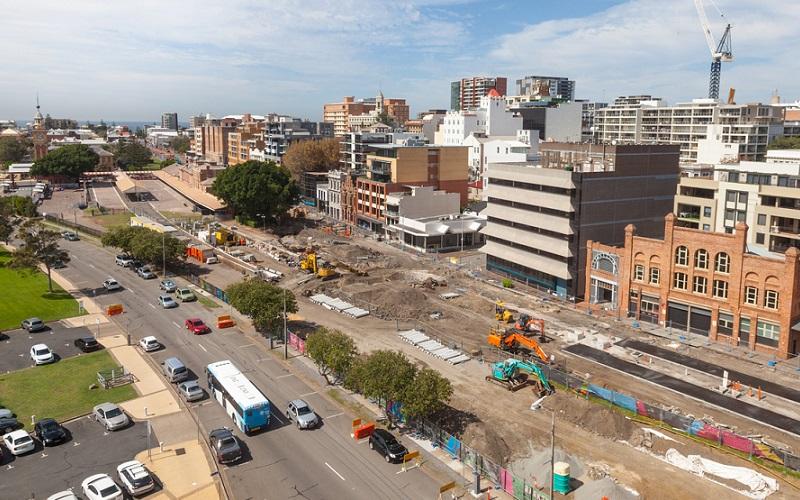 Developers keen to push ahead

“A lot more developments have been fast-tracked because the appetite to buy within Newcastle is so strong,” Crawford said.

“You can clearly see that developers have confidence to bring projects forward even before development consent.

“There’s been a really big upswing in pricing both for completed products and off the plan.

“We don’t produce a lot of stock so the supply and demand ratio is quite strong, so you never see any downside in capital prices ... it’s very rare.

“We are still well and truly below the average price in Sydney—we represent probably 60 per cent of that.

“We’re two hours north and offer a lot of similar attributes in terms of cafes, restaurants. We sit on the coast with the harbour on one side and the beaches on the other.”

“The renewal that has taken place is essentially a reclaiming of the city’s harbour-front precinct which was historically used for industrial and logistics,” Farrington said.

“This prime location on a stretch of Newcastle’s most beautiful water frontage has been under-utilised and underdeveloped until now.

“Newcastle provides exceptional regional city living with all the amenity of a capital city.

“Positive economic conditions underpin the strong confidence developers have in both Newcastle’s residential and commercial markets.”

The East End of Newcastle is shifting away from commercial uses to more residential, centred around Iris Capital’s $700-million project, transforming 11 buildings on Hunter Street Mall.