Construction has begun on a significant extension of Melbourne’s Marvel Stadium in Docklands, the first upgrade since it was opened in March, 2000.

The concourse of the existing 56,000-seater stadium, near Bourke Street, will now be renovated in order to create a “365-day-a-year sport and entertainment hub”.

The new town square, with skylights and windows to give the impression of an “indoor-outdoor” space, will welcome fans more freely from the Southern Cross Station footbridge to the waterfront and feature cafes, bars and restaurants.

The stadium itself will be improved with thematic colour-controlled dynamic lighting, outdoor seating zones and landscaping as well as improvements to the facade and two state-of-the-art scoreboards for either end of the ground.

A refurbishment of change room facilities will "level the playing field" for professional women’s sport. There will also be additional public bicycle parking.

​​There will be 200 less car parks as a result of the revamp while signs, wayfinding and accessibility will be upgraded to make it easier for fans to find their way around the stadium. 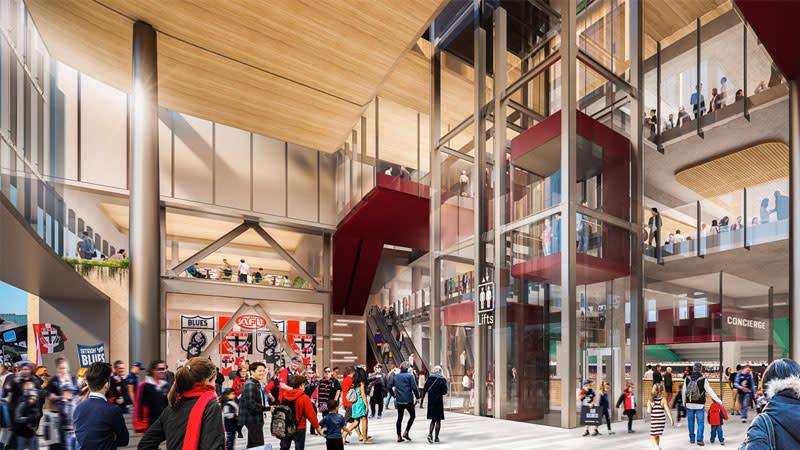 ▲ A key feature is the development of Town Square—a new plaza on the southern side of the stadium. Image: Grimshaw

Construction work, being undertaken by construction firm John Holland, will be funded by the state government as part of its state-AFL Funding and Commitment Deed.

​​The stadium will remain operational throughout the project, able to host scheduled games and major events with construction work scheduled for completion during the 2023 season.

Minister for tourism, sport and major events Martin Pakula said the upgrades would provide a vibrant hub for the Docklands community and will attract more visitors to Melbourne's waterfront.

“This investment delivers a modern stadium experience for fans and will ensure that it remains a world class venue able to host the big games and events that Victorians love,” Pakula said.

Construction of the stadium—designed by Populous, in association with Daryl Jackson—started in late 1997 and was completed in 2000 at a cost of $460 million.

Today the venue is worth $250 million on the AFL’s balance sheet, which has $400 million in assets and $200 million in net assets after debt.

Alongside the stadium, plans for a significant residential development are also moving ahead at pace.

Build-to-rent developer Home is now preparing to break ground on two build-to-rent towers at the 685-691 La Trobe Street after gaining unanimous support from the Future Melbourne Committee in January.

The $400-million project, which comprises two towers of 30 and 28 storeys, includes 676 apartments across 76,000sq m above a podium with 3300sq m of retail, function space and services.