House Lending Up 50pc from Lockdown

Home lending has surged by 47 per cent since May as buyers seize on ultra-low borrowing costs and bet on a sustained recovery in residential property prices.

The bounce has been driven by a premium on home-living during the pandemic, with owner-occupiers dominating the home loan commitments throughout that time.

The surge in home lending follows four consecutive months of credit contraction to August and flat lending figures recorded across September and October.

The total value of new loan commitments for housing hit $24 billion in November, a rise of 5.6 per cent on October and 23.7 per cent higher than the same month a year earlier.

Investor credit rose by a much softer 0.1 per cent in December.

Supporting the rebound has been a slew of near zero interest rates, with the central bank cutting the cash rate by 1.4 percentage points over the past 18 months and it is now at an all-time low of 0.1 per cent.

Furthermore, the extension of the federal government’s Home Builder initiative and as the welcome news that Covid-19 has all but eradicated from Australian shores has seen leading economists tipping double-digit increases. 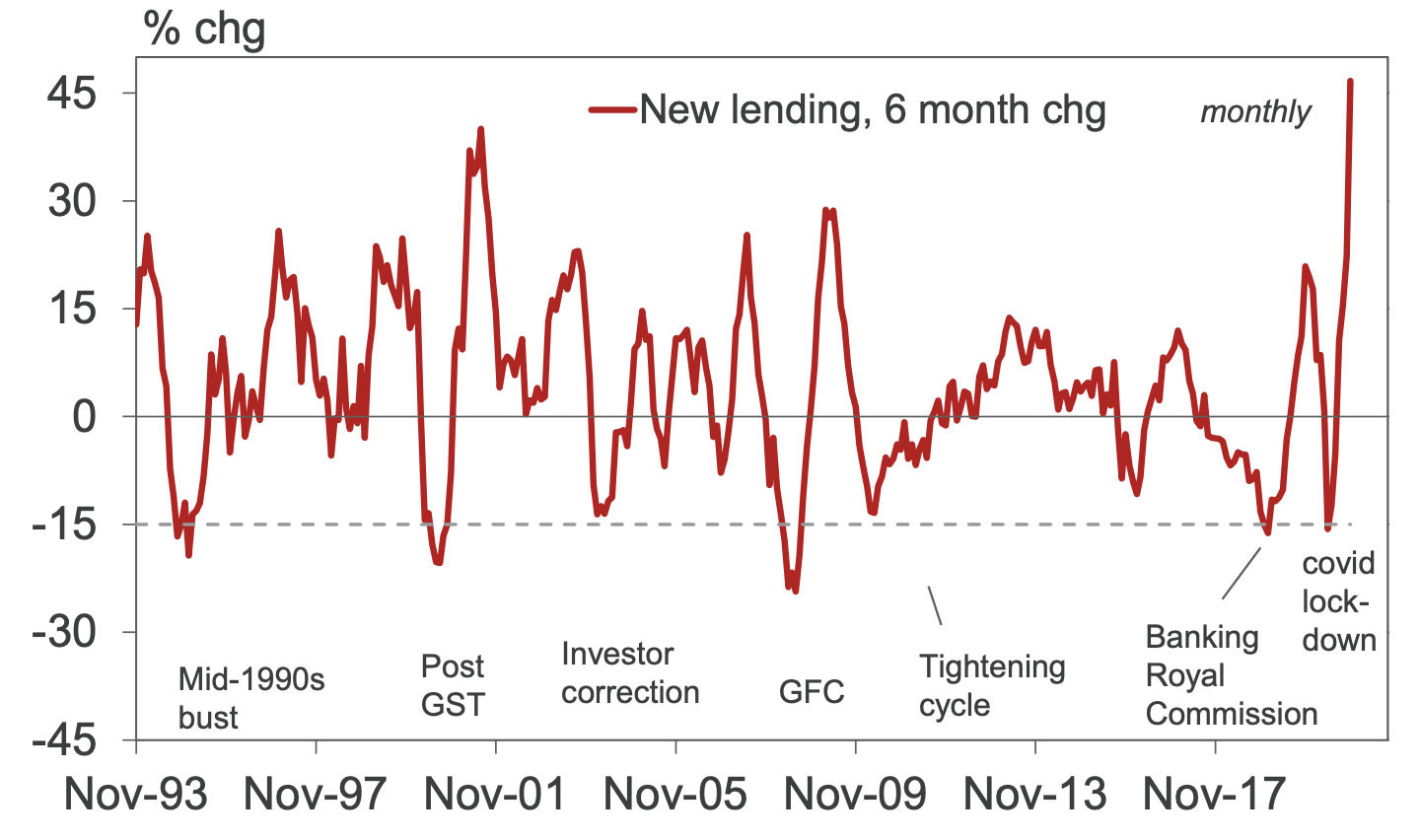 Westpac economist Andrew Hanlan said the increase in new home loans bodes well for the outlook for residential investment with momentum set to continue over the coming quarters.

“That is despite weak population growth—triggered by the closure of the national border, and despite the lift in unemployment—albeit that has not been as large as feared,” Hanlan said.

Dwelling values fell a cumulative 2.2 per cent over the five months from May to September, led by falls in Melbourne and Sydney, according to Corelogic.

Tougher and extended lockdown measures in Victoria meant that Melbourne lost 1.3 per cent across the year.

Since November, following the easing of Covid-19 restrictions, home loan commitments in Victoria have lifted sharply, up 19.6 per cent in seasonally adjusted terms.

Attention is now being turned to the potential for a runaway market, with the Reserve Bank of Australia and federal government under pressure to rein in lending standards in 2021.

UBS economists have said the best way to curb a runaway property market would be through macro-prudential policy, asking the Australian Prudential Regulation Authority (APRA) to tighten its regulatory framework.

But some were sceptical whether APRA would intervene in 2021, saying intervention was more likely in 2022 or 2023.

“We expect housing credit to grow at a modest pace over 2021 and do not think this poses a risk to financial stability,” CommSec chief economist Craig James said.

“Broad money is also expected to remain elevated while the RBA’s quantitative easing is in place until April 2021.

“We think the RBA will announce an extension of their quantitative easing program by another $100 billion at either the March or April Board meeting this year.”