[+] New Tower for Gold Coast ‘Line in the Sand’

It is a line in the sand that runs down the middle of a street in one of the Gold Coast’s most affluent beachside suburbs.

Peerless Avenue at Mermaid Beach is what locals have dubbed a “dam wall for development” that is holding back a surging tide of tower projects.

Bookended by the millionaires row Hedges Avenue and the Gold Coast Highway, its northern side marks the southernmost edge of the city’s unlimited building height zone that runs up through Broadbeach, Surfers Paradise and Main Beach.

The zoning was introduced in the City Plan in February, 2016.

On the southern side of Peerless Avenue, however, the lid has been keep on its medium-to-low-rise zoning—with a 15m height limit, the equivalent of three storeys.

But the pressure is now on what has been described as one of the city’s “final frontiers for large beachside tower developments”—an almost towerless strip stretching south from Peerless Avenue.

The Gold Coast's population growth has been supercharged, soaring during the pandemic and the influx is expected to continue with forecasts the city will be home to more than a million permanent residents by 2041.

Off the back of the surge in interstate migration, the city's new apartment stock level has hit a decade low. As a result, development activity—despite prevailing construction constraints—has ramped up and Peerless Avenue is getting its share of the action. ▲ Line in the sand: Mermaid Beach’s Peerless Avenue (with blue marker) from above.

They will joined in the not-too-distant future by a newly-approved and even taller tower, one of two recent development proposals that reflect the starkly contrasting planning parameters along Peerless Avenue.

Only four months after lodging his plans with the Gold Coast City Council, Sunland Group founder Soheil Abedian has been given the green light for a $255-million, 36-storey residential project comprising 109 apartments on a 1620sq m site spanning four lots at 35-41 Peerless Avenue.

“Everything that is zoned—no matter if it is low-rise, mid-rise or high-rise—it has to begin somewhere and it has to end somewhere,” Abedian told The Urban Developer. “So, somewhere there has to be a line.”

Abedian is renowned as the design-led entrepreneur who dreamed up and delivered the world’s first fashion-branded hotel, Palazzo Versace, and the cloud-busting, one-time tallest residential building, Q1.

Peerless, his latest project, will be developed under the new Abedian & Co brand and be his first solo foray after announcing plans in late 2020 to wind down the operations of ASX-listed Sunland.

Rising 124m into the city's skyline, it will take development to a new level on Peerless Avenue.

Two houses and a pair of two and three-storey dual occupancy buildings will be demolished to make way for the tower. 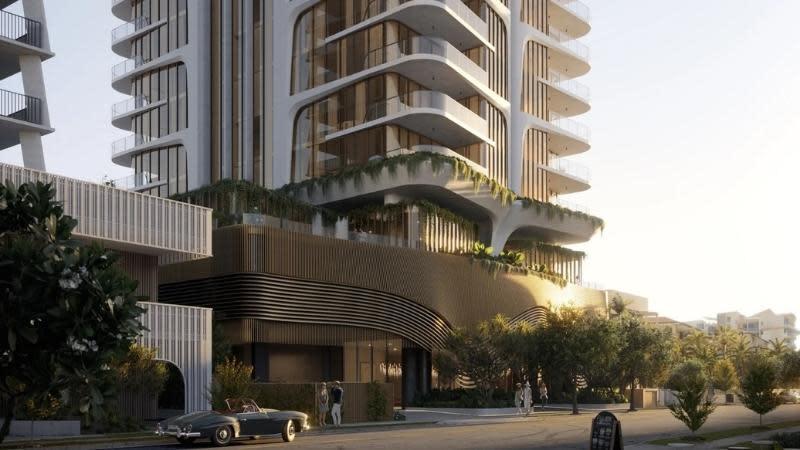 ▲ A render of the now-approved Peerless, the first project under the Abedian & Co brand.

Design firm Spatium Architects was tapped for the project and has envisioned what it calls a “landmark building along the southern high-rise fringe”.

“The proposal provides an innovative, contemporary and functional design outcome that will complement and enhance the existing and emerging urban forms in the general locality, without unduly impacting the amenity currently enjoyed by surrounding properties,” the development application said.

Meanwhile, on the opposite side of the street, plans have been filed for a much smaller apartment building that would rise only four storeys but, nonetheless, exceed Peerless Avenue’s southern three-storey (15m) building height limit.

Proposed for a 810sq m site at 28 Peerless Avenue, the DA has been lodged on behalf of an entity linked to John Sader and Garry Pesochinsky, the founders of Melbourne-based boutique developer Lion Property Group. 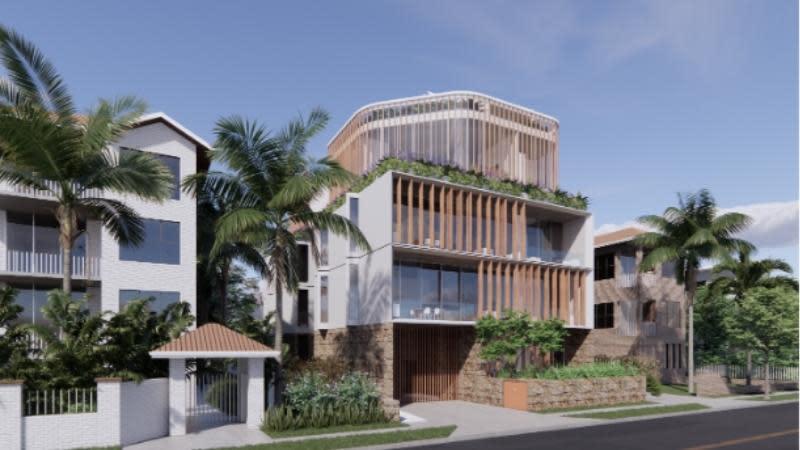 ▲ A render of the proposed Luminare development at 28 Peerless Avenue.

Communal amenities including a gym, cellar, barbecue, sauna, spa and swimming pool have been incorporated into the planned basement levels.

To be known as Luminare, it will replace an existing two-storey block of seven two-bedroom units.

“The characteristics of the area include a variety of low to medium rise buildings, with developments exceeding three storeys spread across the neighbourhood,” said a town planning report submitted as part of the DA.

“While it is acknowledged that the building height overlay creates a deliberate step change in building heights between the southern and northern sides of Peerless Avenue ... it is nonetheless relevant that the locality is robust, urban and readily capable of accommodating a four-storey (22m) tall building.”

Some local residents—many of them with deep pockets—would beg to differ. They believe cracks are starting to appear in the Peerless Avenue development “dam wall” and argue that any relaxation of the existing building caps could ruin the beachside village vibe of Mermaid Beach.

But according to the DA, the design of the building with a three-storey base and recessed, angular upper-level form in lighter materials and finishes “reduces the perceived bulk and scale”.

“Despite the proposed variation in height above three storeys and 15 metres, the proposal will not compromise the deliberate and abrupt variations in heights that is sought on the opposite side of Peerless Avenue,” the documents said.

“Like other sites in the neighbourhood, the application proposes no greater than 50 per cent increase on that which is mapped on the building heights overlay.

“In contrast to the application site, the opposite side of Peerless Avenue includes buildings which are up to 30 storeys in height and are distinctly of much higher density.”

Peerless Avenue is still a firm line in the sand but on the Gold Coast the sands are ever-shifting.