In a revised development application before the Brisbane City Council, five years after the original approval, Henroth subsidiary Manley Properties is now seeking 349 apartments in two towers on Montague Road.

But whereas the original approval was for 470 apartments in five buildings, the maximum building height was just 12 storeys.

Now they’re looking for two towers—one of 19 storeys and another of 17—plus 1600sq m of retail space and underground parking for 482 vehicles.  Additionally, there will be 7000sq m of public space and what is described as “significant widening” of Montague Road.

But designers Noel Robinson Signature Architects say the height of the two buildings is not an issue.

“The city plan is a performance-based planning scheme and it allows for deviations from that if you are providing public benefit,” principal architect Noel Robinson said.

“We are providing significant public benefit for not much extra in terms of what the height is.  Height is not an issue.

“The client wants to do a really significant community asset and wants a better outcome than originally proposed. 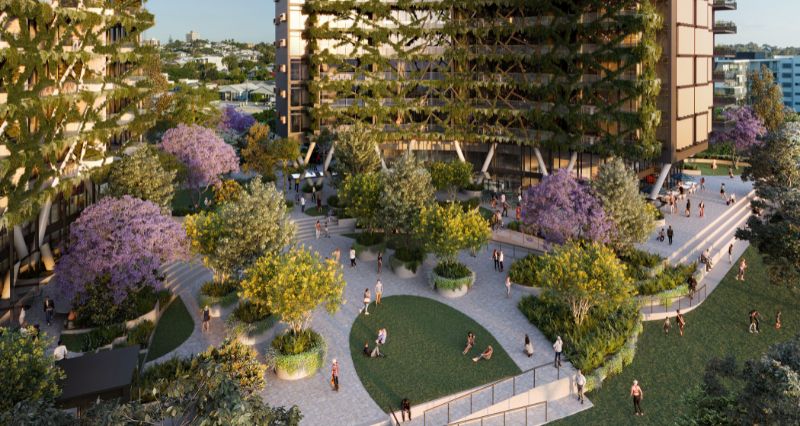 ▲ Developers the new application is a better outcome for the community.

Manly Properties acquired the two adjoining sites in 2007 and 2014 for a total $28.7 million. Robinson says despite the long wait to develop, and 120  less apartments, the new proposal will still be profitable.

“The site was bought over 10 years ago, so the cost is amortised,” he said.  “It has had good holding income through two buildings on the site so it’s not stressed or burdened. The length of time hasn’t really mattered.”

There’s been stiff community opposition to the new proposal with a petition signed by more than 1450 residents, complaining about height of the buildings and additional traffic.

It’s not the first project to run afoul of community objections in the area.   Sydney-based developer Crown Group has returned to the drawing board for the design of its $500-million apartment project, also in Brisbane’s West End.

And a community group successfully kiboshed plans for a $300-million apartment tower in South Brisbane, filing an appeal against its approval in the Planning and Environment Court.

In an often-heated Brisbane City Council meeting on Tuesday, mayor Adrian Schrinner accused councillor Jonathan Sri of “riling up your residents” against every proposal that comes through the council.

“Development approvals make a difference when it comes to Brisbane being an affordable place,” the mayor said.

“If you don’t believe that you are in some kind of fantasy land.”

Sri responded by accusing the mayor of lying about him.