Ramping up its apartment project pipeline to capitalise on a market undersupply, Deicorp has put its foot on what has been touted as one of South Sydney’s last major development sites.

The privately-owned developer has sealed a circa $180-million deal to secure the 2.86ha multi-tower site at Zetland in the city’s inner-south.

The prime holding at 130 Joynton Avenue is zoned for a mixed-use development and has an allowable gross floor area of about 55,000sq m with a staggered height limit ranging from 28m to 50m.

Spread across the site are nine buildings with varying uses, including office, warehousing and storage spaces as well as parking capacity for vehicles of all sizes.

It has been offloaded by owner and occupier electricity distributor Ausgrid, owned in partnership by the New South Wales government, AustralianSuper and IFM Investors.

“We are delighted to have acquired what will be one of Green Square’s prime residential addresses, adjacent to Gunyama Park and Aquatic Centre and a short walk from Green Square train station and East Village Shopping Village,” Deicorp’s corporate communications executive manager Robert Furolo said.

“Our newest Zetland development will incorporate a substantial public park that will support the City of Sydney’s revitalisation of the precinct, and create a new green space in the Green Square precinct.

“And like all of Deicorp’s projects, it will also support the principles of transit-oriented development being an easy walk to the airport line and new Metro, as well as to great shops, cafes, restaurants.

“We will be undertaking a design excellence process as part of our vision to bring stylish, contemporary and beautiful homes to this vibrant part of Sydney.” 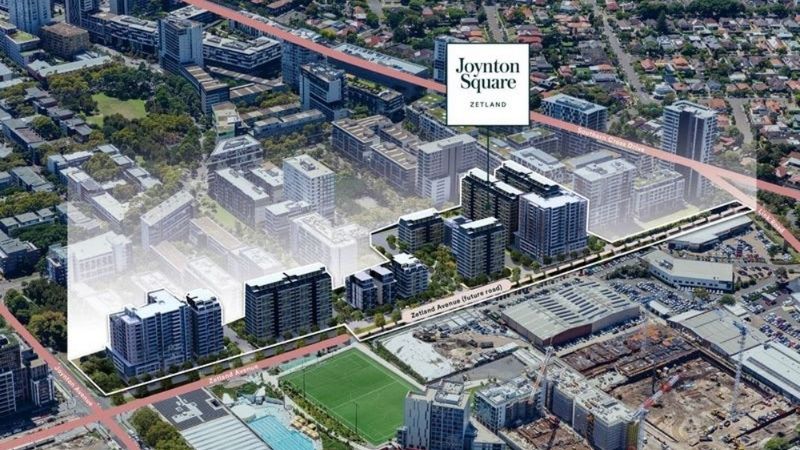 ▲ The site at 130 Joynton Avenue is zoned for mixed-use development with an allowable gross floor area of 55,000sq m. Image: Joynton Square.

It was offered with masterplan approval for eight buildings and a number of strong offers were put on the negotiating table but ultimately fended off by Deicorp.

“There hasn’t been a scalable residential site put to market for quite some time and residential buyers fell over themselves in a bid to secure this site,” Crombie told The Urban Developer.

“Market conditions for residential development are extremely strong, especially at scale, allowing developers to develop across a site over a number of years.

Nearby, Deicorp staked another claim at Zetland two years ago acquiring a 2.16ha parcel at 106-116 Epsom Road from Lincoln Developments for $140 million.

In collaboration with design firms Architectus, MHNDU and BVN, it has envisioned the Downtown Zetland precinct with 546 apartments due for completion next year.

It also has approval for 176 apartments in Roseberry and estimates about 600 apartments will be accommodated on the new site.