Australia is facing its worst materials shortage in 40 years as shipping and haulage delays fan the flames of the construction sector crisis, causing a 20-year record spike in inflation.

BIS Oxford Economics principal economist Sean Langcake said new dwelling construction costs had been a major contributor to inflation in the September quarter, rising 3.3 per cent quarter-on-quarter, the largest quarterly rise since the introduction of GST in 2000.

Australian Bureau of Statistics data shows the average value of an approved house has risen to $366,700, an increase of 13 per cent on a year ago. Economists are warning accelerating material and labour costs will cause further cost growth into 2022.

The CPI measure captures the out-of-pocket expense of building a new house or apartment, excluding the cost of land.

“Residential construction has been well supported by record low interest rates, and HomeBuilder and other government grants,” Langcake said.

“This surge in demand has established a deep pipeline of work for builders, which is now being realised with commencements reaching a record high in the second quarter of 2021.

“At the same time, the increase in demand has outstripped materials suppliers’ capacity, which in some instances has been further affected by the strength of demand globally.

“Accordingly, there have been sharp increases in input costs for builders, with timber, concrete, aluminium, glass, floor coverings, plumbing and pipe fittings, and electrical inputs all affected … steel prices have also risen sharply due to the spike in iron ore prices globally earlier this year.” 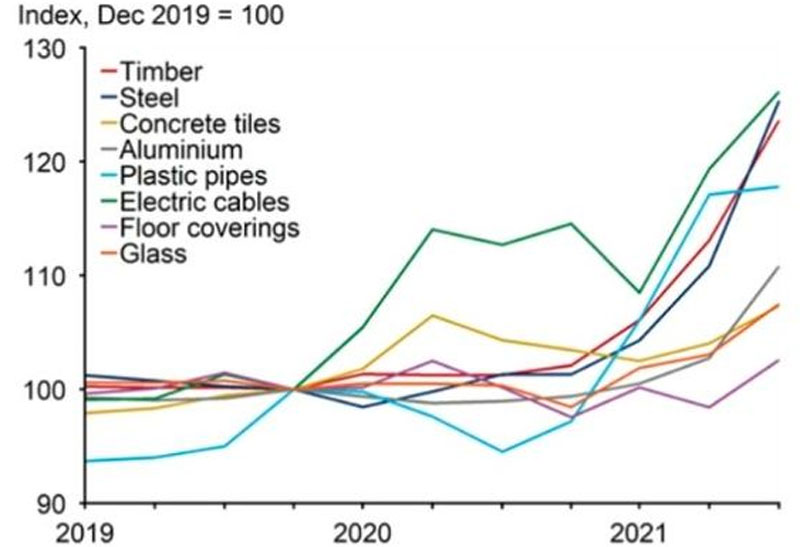 Langcake said while the supply chain issues had not been as chronic in Australia as in the US, new dwelling constructions had significantly affected inflation in the September quarter.

“While global shipping costs remain extraordinarily high, they appear to have plateaued and are broadly expected to recede from here,” Langcake said.

“Nevertheless, we expect it will take until the second half of 2022 before disruptions are fully worked through.”

“Delays in sourcing materials from international suppliers especially is not a new issue for Australia, given its geographical location, but [it was] exacerbated by Covid-19 among other factors and we now have a crisis on our hands,” Brumfield said.

“Steel prices have risen by 15 per cent, which is a significant increase when you’re talking about large scale, multi-million-dollar projects, with lead times taking up to 18 months.

Brumfield said steel price increases had bitten into overall costs of projects including the Adelaide SkyCity casino, which used 2200 tonnes of steel, and the Her Majesty’s Theatre redevelopment, which used 950 tonnes of steel. He said planning was crucial in mitigating cost creep.

“The main tactics used to mitigate the crisis is by incorporating shop drawings, or design intent plans, as early as possible to try to give clients an idea of costings and timings to the best of our ability,” he said.

“It is almost inevitable this will be an ongoing issue so addressing it now will actually benefit the industry, and therefore Australia’s economy, long term.”

“Australia’s best insurance is providing support for local capacity of steel production which the federal and state governments have been doing well to promote—more efforts toward supporting local producers would certainly help.”