The competing pressures of a hot property market and rising construction supply costs are claiming victims as builders are pushed to the brink.

The Morrison government is adamant that the nation will build its way out of the pandemic, pouring $2.5 billion into the Homebuilder support package to support the construction sector.

More than 121,000 Australians applied for the grant, which is expected to support around $30 billion of residential construction projects.

But with 53,980 (42 per cent) more residential home builds under way than a year ago, some suggest the market has been overstimulated, putting intense pressure on builders to deliver, with one builder saying: “The problem is that the industry can’t build that many houses.”

Across the nation, building firms are showing signs of stress after trying to keep their head above water amid a frenzied market.

Aside from labour shortages, the industry is battling a range of issues, including the building materials shortage due to disrupted supply chains. One insider says that build prices have risen by around $30,000 since the start of the pandemic.

The situation has become so dire that the industry is rife with speculation that at least one or two of the larger building firms have been handing back contracts that could no longer be fulfilled due to rising building costs making it untenable to complete projects.

One of the builders rumoured to be handing back contracts is Metricon.

But Metricon chief executive Mario Biasin dismissed the current “malicious” rumours circulating about the firm’s capacity to service its customers. 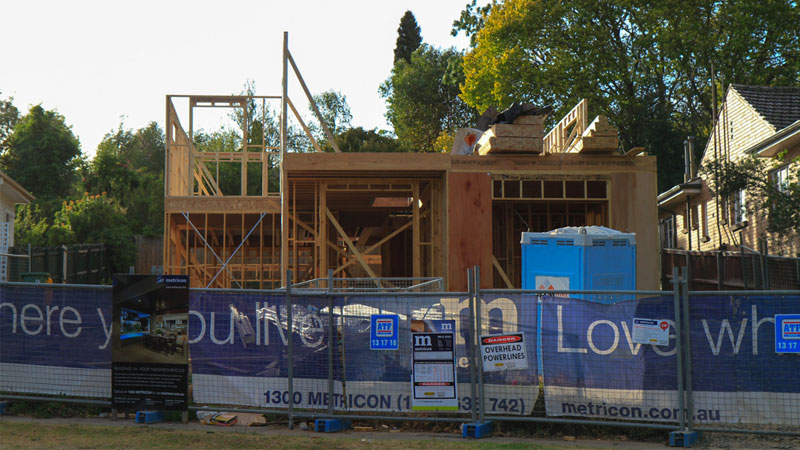 ▲ High-profile builder Metricon says rumours it is handing back contracts are “are false and baseless”.

“The rumours suggest that Metricon has been cancelling customer contracts due to price escalations, or an inability to build due to product shortages,” he says.

“These rumours are false and baseless. Metricon is in a very strong position to complete all work it has, and is continuing to accept and support a high number of new customer builds.

“Rarely would Metricon wade into such innuendo. In this instance, however, given the current market conditions due to Covid and some competitors going into liquidation or maybe illegally increasing prices, we feel we must quash these rumours.

“Metricon is not cancelling contracts, and is in a very strong position to complete all works now and in the future.”

But the cracks are showing elsewhere, with 25 per cent of all insolvencies nationally happening in the construction sector.

Last week, Privium and other companies in the group were placed into voluntary administration, with debts of more than $28 million. The firm operates in Queensland, NSW and Victoria.

Named the 11th largest builder in Queensland by the HIA this year after completing more than 600 projects worth $180 million, the firm is blaming surging construction costs.

Melbourne’s ABD Group also appears to be on the verge of collapse, ceasing work on three high-profile contracts, with two contracts torn up. The collapse would leave between $50 million and $80 million in outstanding debt, sources say.

The fall-out is hitting construction businesses too. Safa Scaffolding, on the Gold Coast, went into voluntary administration in June.

▲ Privium chief executive Rob Harder called in voluntary administrators over a number of Privium companies in the group last week.

Builders are in short supply across the country, with many booked a year or more in advance.

Whether the higher costs will remain is unknown. A small developer in Melbourne claimed to be “ticking along normally”, but has heard that builders are struggling to make projects stack up.

“There’s a debate in the office about whether the inflationary prices we’re seeing are transitionary or whether they’re permanent. Right now, higher costs have changed the feasibilities of the building industry,” he says.

Some developers blame too many government incentives, which have over-stimulated and artificially inflated the new residential home sector. Another developer has heard of wholesale cancellations.

“The HomeBuilder boost was supposed to support our property and construction industry, but all it’s done is bring forward more than 40,000 new home builds, putting pressure on the industry,” one developer said.

Land prices have also been surging since the start of the pandemic. You can expect to pay $42,000 more in Melbourne for an average block of land.

Investorist founder Jon Ellis believes past government incentives have pushed the industry into unprofitable territory, with a number of builders now heading to collapse and home buyers disadvantaged by artificially inflated prices.

“Before the HomeBuilder grant, we saw a strong house and land market. It has been strong for the past few years, and price growth has been consistent.

“But since the launch of the grant, we have seen house and land packages in some corridors go up by $100,000 in less than 12 months.

For example, a townhouse project in Melbourne’s south-east listed on Investorist went up by $50,000 in three months, which for some homes was the same as a 10 per cent increase.

“Builders and land developers have been so focused on meeting the demand that has been brought forward by the grant, that they have largely ignored their new business pipeline.

“I believe by mid-next year, at least, we will see the industry scrambling to try and find buyers,” Ellis says.