Build-to-rent apartments could achieve up to 27 per cent higher rents than build-to-sell, welcome news for developers breaking ground on projects across the country.

While there are few examples of build-to-rent assets in the market,  Charter Keck Cramer research shows those that are on the block are achieving premium rents.

But the Charter Keck Cramer report warned rental premiums for build-to-rent projects would be “sub-market specific and come down to brand, location and amenity”.

It comes as good news for Frasers Property, which broke ground on its first build-to-rent project nationally in Brisbane recently.

Almost 150 of the 366 apartments in the Brunswick & Co build-to-rent development at 210 Brunswick Street at Fortitude Valley will be affordable housing, subsidised by the Queensland government.

Frasers Property Australia executive general manager of development Cameron Leggatt said the company was excited to move into the construction phase of its first build-to-rent project.

“Frasers Property is committed to redefining renting at Brunswick & Co., delivered in one of Brisbane’s most emerging and vibrant precincts,” Leggatt said.

“This is a major milestone for the community and we’re proud to collaborate with the Queensland government and Hutchinson Builders on this landmark project, to help Brisbane meet growing demand in the lead up to the 2032 Olympic Games.”

The property is expected to be launched to market in 2024.

It’s the second build-to-rent project to break ground in Brisbane after Mirvac began construction of its LIV Anura development at Newstead in August last year. 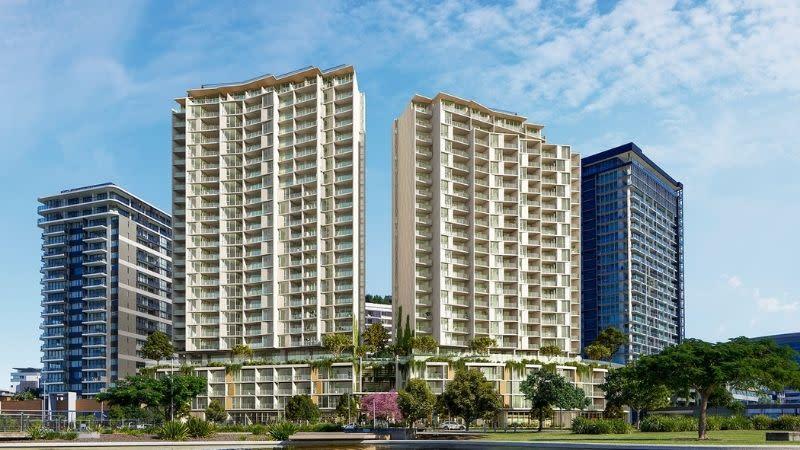 ▲ Build-to-Rent is moving into Brisbane. Mirvac broke ground on its LIV Anura project at Newstead last year and is one of two under construction, while a further two are being considered by the Queensland Government.

“The Palaszczuk government’s build-to-rent program is an important part of our commitment to delivering more affordable housing options,” Enoch said.

Brisbane and Canberra have been identified as the next build-to-rent markets with key drivers including housing affordability, population growth and a desire to live near places of employment and amenity present in the capitals.

Savills director of operational capital markets Paul Savitz said while the build-to-rent market in Australia was fragmented, investors were looking to scale up quickly.

“We look to more established build-to-rent markets such as the UK and US for an indication on how the Australian market will progress, and we expect consolidation in the future, as has happened globally,” Savitz said.

“As build-to-rent continues to mature as an asset class, we expect greater liquidity and economies of scale will put downward pressure on the sector’s risk premium.”