The Brisbane City Council has greenlit a $200-million expansion of the Rivergate marina on the Brisbane River to make the shipyard superyacht ready in time for the 2032 Olympic Games.

The expansion of the 8.4ha maritime precinct at Murarrie, which was originally submitted to the council in late 2020, has been forecast to dramatically increase superyacht visits to Australia.

Since beginning operations in 2006, the marina has played a key role in attracting superyachts to Brisbane and Queensland for refit, maintenance and tourism.

Rivergate Marina director Tom Hill, whose parents developed the waterfront precinct when he was a teenager, told The Urban Developer expansion plans had been in the pipeline for four years to address a lack of infrastructure in south-east Queensland for lifting and berthing vessels over 45 metres.

“Growing up around the construction industry has exposed me to the ins and outs of large-scale project management, which is proving helpful for my role in the Rivergate expansion,” Hill said.

“As well as this, the reputational growth and skills fostered over the past 16 years led to our leadership team recognising the need to expand and grow its capabilities to meet pent-up demand within the superyacht industry.”

Hill, who is also the director of national construction company ADCO, said his affinity with the marine industry had begun at an earlier age after being homeschooled aboard a boat while travelling the Pacific.

In 2001, Tom’s father and ADCO founder Bob Hill was approached by the state government and tasked with developing a “world-class marine industry precinct” along the Brisbane River. 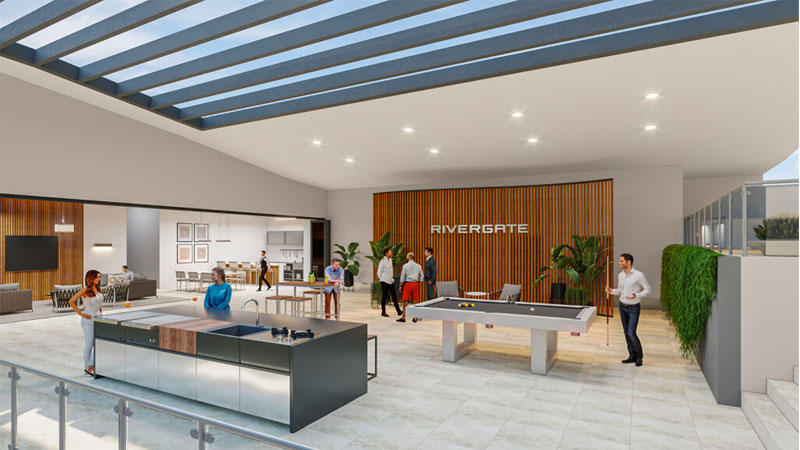 ▲ During 50 years in operation, ADCO has delivered more than 3500 projects valued in excess of $14 billion.

“At the time, my family owned and operated Byron Shipyard in Bulimba, alongside other marine industry businesses, and had built a strong reputation within the marine industry,” Hill said.

“They subsequently acquired 15.15ha of land from the state government and developed the site to include a marine industrial park, which includes Rivergate Marina and Shipyard.”

The marina’s extension will be built in two stages—the second stage will include a five-storey trade building with offices, training rooms and 14 short-term crew accommodation units.

Central to the expansion will be a $35 million state-of-the-art shiplift capable of lifting vessels of up to 3000 tonnes and 90 metres, and new hardstand space, sheds and berthing to service multiple large vessels at the same time.

The development will also enable Rivergate to service more commercial shipping and several classes of Defence and Border Force vessels that currently have to steam to Perth or Adelaide for vital refit and maintenance works.

It will be mostly funded by Rivergate’s owners, who are also seeking government support due to the employment and economic benefits the project will deliver, as well as the contribution it will make to Australia’s Defence maintenance capability.

Upon completion, the expansion is expected to generate an estimated 2000 new jobs for marine and tourism sectors and inject upwards of $1 billion into the economy each year 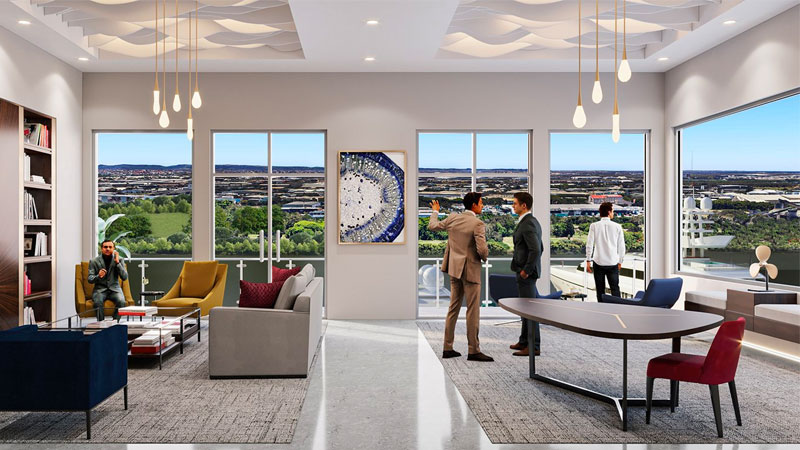 ▲ The captains’ lounge and library are part of the plans and will be for the use of owners and crew.

Hill said Rivergate had been working to ensure all levels of government had an understanding of the project with a number of senior government representatives visiting Rivergate during the past few months.

“This boom requires more services, such as boatyards and marinas to keep up with demand, and with the current marine berthing market being so tight, there’s plenty of opportunities for investment in this sector.”

Directly across the Brisbane River in Pinkenba, Sentinel Property Group has sold a 14ha bulk storage industrial facility to an undisclosed syndicator for $89 million.

The waterfront industrial site, which has 1.5ha of seabed lease, was sold for $40 million more than it was bought for more than five years ago.

Sentinel chief executive Warren Ebert said that at the time he was told he had paid “far too much and would never get our money back”.

“But I thought 14ha on the water with its own 34,500 tonne wharf was a rare find, and this has proved to be the case,” Ebert said.

“While we were not a motivated seller, the industrial market was at the stage where the offers we were getting presented with were far too good to ignore.

“With interest rates starting to move up, we have seen some buyers becoming cautious and vendors' expectations have already started to adjust.

“This is a great time to be sitting on plenty of cash.”

The deal, which was struck by Savills’ Toby Hundertmark, delivered an internal rate of return of more than 20 per cent for investors.

The property comprises 26,676sq m of buildings, including high-clearance warehouses and four liquid storage tanks with an 11.94 megalitre product capacity.