Brisbane’s airport will have a third terminal—and use only renewable energy by 2025.

Planning for the third terminal is under way with talks between the airport and airlines.

Brisbane Airport Corporation estimates 50 million passengers will travel through its terminals each year by 2040.

“We are running out of terminal capacity and we’re looking at the best location, together with our airline partners, for where that new terminal will go,” Brisbane Airport Corporation chief executive Gert-Jan de Graaff said.

“We think it will be in between the two runaways because that’s the perfect location to minimise aircraft taxiing, and it is close to our current domestic terminal.

“A few of our domestic airlines will likely go into Terminal 3. We might even allocate some international traffic in there as well to provide for better connectivity between domestic and international flights.”

Brisbane currently services routes to 53 Australian destinations, more than any other airport and is a gateway for flights from North America and South-East Asia.

The airport currently employs 24,000 people—that will rise by 10,000 jobs in the coming decade.

“Terminal 3 will be … a terminal we’ve built for the 2030s. Sustainability will be front and centre, as will accessibility,” de Graaff said.

“We know that come 2032, Brisbane airport will provide the first and last impression for all Olympic and Paralympic visitors and we take that responsibility very seriously.” 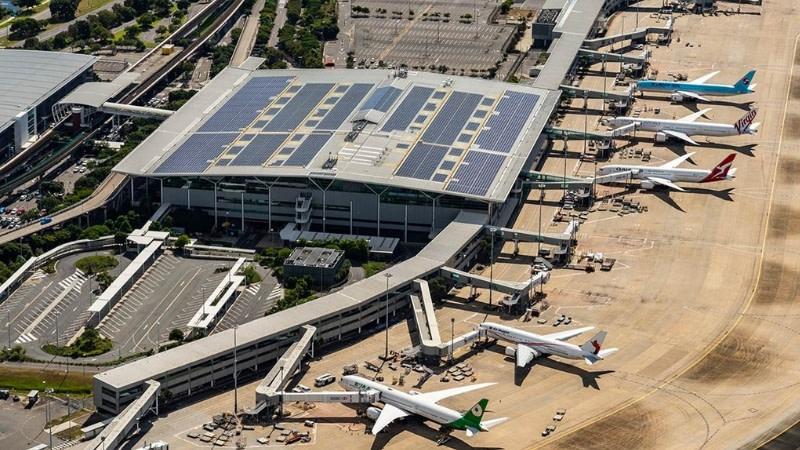 ▲ The airport will experience a large increase in passenger numbers in the run up to the 2032 Games.

Currently, Brisbane airport is planning to invest more than $5 billion in the next 10 years to upgrade both terminals, build extra carparking, develop a regional aeromedical hub, expand Skygate and DFO, and build more freight facilities.

“We are well-placed to further develop the airport’s air connectivity to meet travel demand, but equally important is BNE’s connectivity on the ground,” he said.

“All levels of government need to collaborate to ensure fast, reliable and affordable road and public transport connections for travellers and workers to the airport.

“We need mass transit connections not just to the CBD and Brisbane suburbs, but also the Gold Coast and Sunshine Coast.”

Brisbane Airport Corporation (BAC) has entered into an historic six-year agreement to secure power that is linked to renewable energy from Queensland’s Clarke Creek Wind Farm and Blue Grass Solar projects as part of its commitment to be net zero for scope 1 and 2 emissions by 2025.

The airport this week became the first customer to sign on to Stanwell Corporation’s renewable energy pipeline, which will supply up to 185 GWh of power each year.