BAC chief executive Gert-Jan de Graaff said that while works remained on track for completion later this year, the “difficult” decision had been made to cancel the celebratory community events planned for the project’s launch due to the Covid-19 pandemic and public health directives from government regarding public gathering restrictions.

A key part of Brisbane’s broad infrastructure pipeline, works on the 360-hectare site—more than twice the size of the city’s CBD—commenced in 2012, with contractors BMD and CPB forming a joint venture, Skyway, to deliver the Airfield Works contract and McConnell Dowell delivering the associated Dryandra Road works contract.

Announcing the final component of the construction program only last month—in line marking of the new runway and accompanying taxiways—de Graaff said the “iconic” project was expected to be brought to completion under budget at a cost of $1.1 billion, a saving of $200 million.

Prior to the Covid-19 outbreak, the new runway had been set to effectively double Brisbane Airport’s capacity, bringing more visitors to the region and allowing Brisbane residents a greater choice in airlines and destinations.

The aviation industry is one of the hardest hit by the coronavirus, with carriers Qantas and Virgin standing down the majority of their workforce, and Virgin seeking government assistance, this estimate is undoubtedly set to change.

And while BAC maintains that the new runway will be completed on schedule, the question of when it would actually begin operations is another matter. 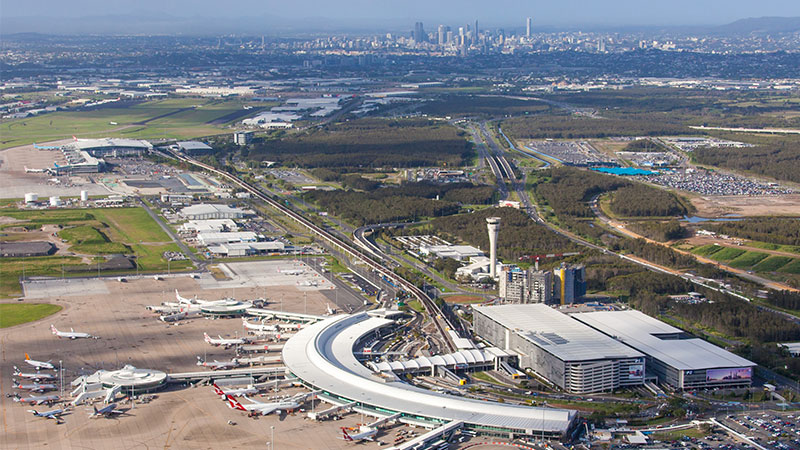 “Plans for the runway to begin operating from mid-July are being reviewed in light of Covid-19 and a decision will be made in the coming weeks once operational partners' views have been considered,” BAC spokesperson Rachel Bronish said, adding that BAC continues to follow any directives made by the government, including new measures to quarantine all incoming international passengers.

“Our number one priority remains ensuring the safety and security of all staff, passengers at others at Brisbane Airport.”

Likewise, Bronish said the impact of the coronavirus measures on the progress of additional projects slated as part of BAC’s $3.9 billion masterplan—approved this month by the deputy prime minister—also remains unclear.

“It is too early to determine whether individual construction projects on precinct will be delayed as a result of Covid-19.”

BAC has advised that Brisbane Airport will remain open in a heavily-reduced capacity and continue to deliver its essential services to the people of Brisbane and Queensland “during this most challenging time facing the tourism and aviation industries”.

With details of the official opening of the new runway to be advised in due course, de Graaf said Brisbane’s new runway would be a key component of the recovery phase post-coronavirus.

"Importantly, we know that this pandemic will end and when it does, Brisbane’s new runway will be essential to the recovery of so many industries.

"We will be here when this is over to once again connect people across the country and world and play our part in helping restore the economic health of our city and state," de Graaff said.