One of Australia’s biggest hotel development check-ins is under way and by no coincidence a new international airport—with an initial handling capacity of 10 million passengers a year—is taking shape nearby.

The construction of the Western Sydney International Airport at Badgerys Creek is one of the key drivers of the hotel boom that is riding an investment and development surge in Parramatta.

Looking to capitalise on the future runway of business in what has been tagged Australia’s “next big city”, some of the world’s top hotel brands have been jostling for a foothold in the city only a 30-minute drive from the airport site.

By the time the airport is due to welcome its first passengers in 2026, Parramatta is forecast to have more than 1000 new hotel rooms.

Construction is scheduled to commence in April with completion due in the first quarter of 2024. 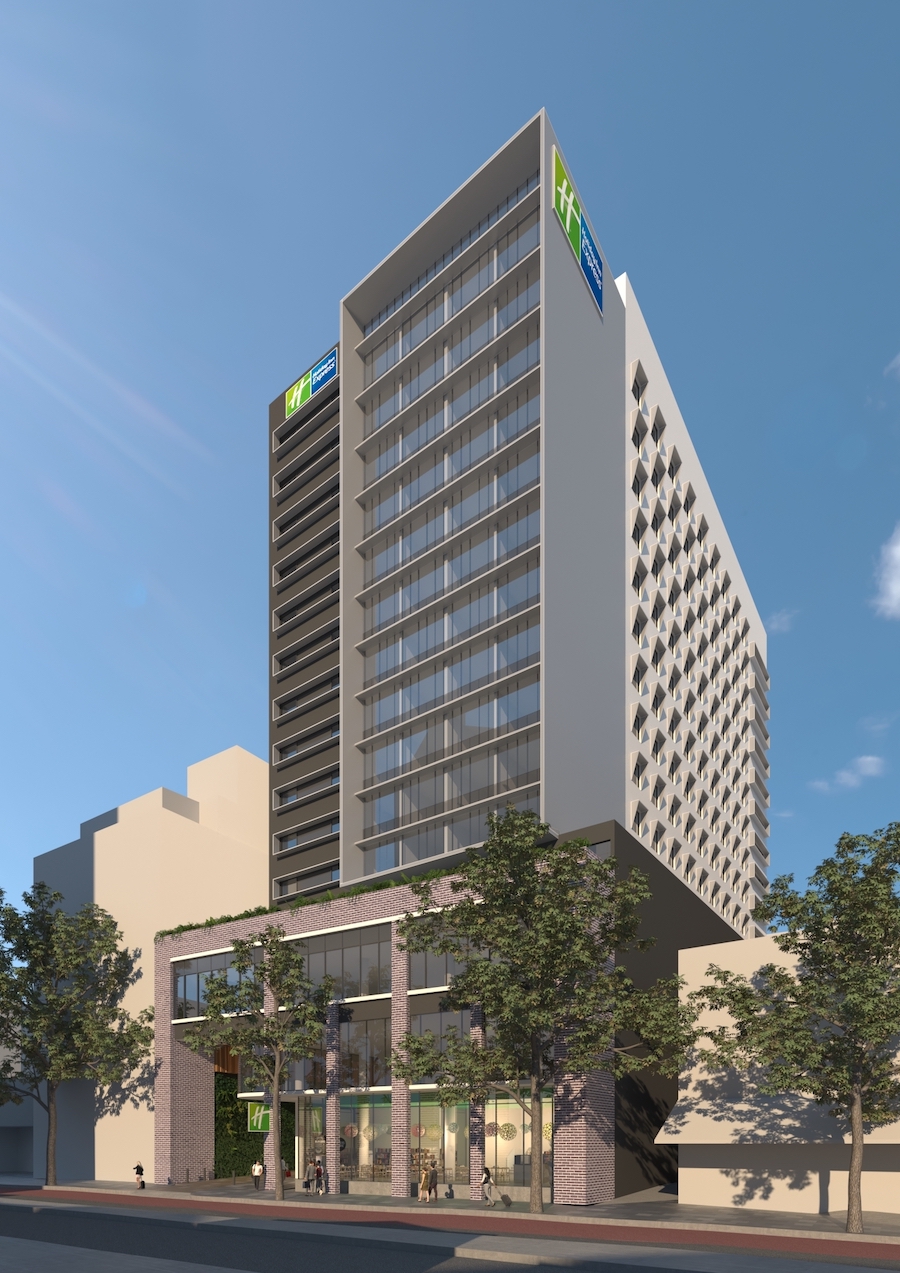 IHG development director Jael Fischer said that Parramatta had cemented itself as a major commercial hub in New South Wales.

“IHG is excited to be at the forefront of re-shaping the city’s accommodation landscape,” Fischer said.

“We look forward to working closely with the community and being a major contributor to the local economy.”

IHG is also behind what is being touted as Parramatta’s first luxury hotel development.

The five-star Intercontinental-branded hotel is due to open its doors in 2025 as part of the dual-tower, 197 Church Street mixed-use project by Sydney-based developer Holdmark Property Group.

It will comprise 212 rooms across a slender 31-storey tower capped with a rooftop bar and signature restaurant.

In the heart of the Parramatta CBD, it is earmarked for a 4300sq m holding bounded by Church, Macquarie and Marsden streets and sits next to a site subject to a planning proposal for a 245-room Hilton Hotel. 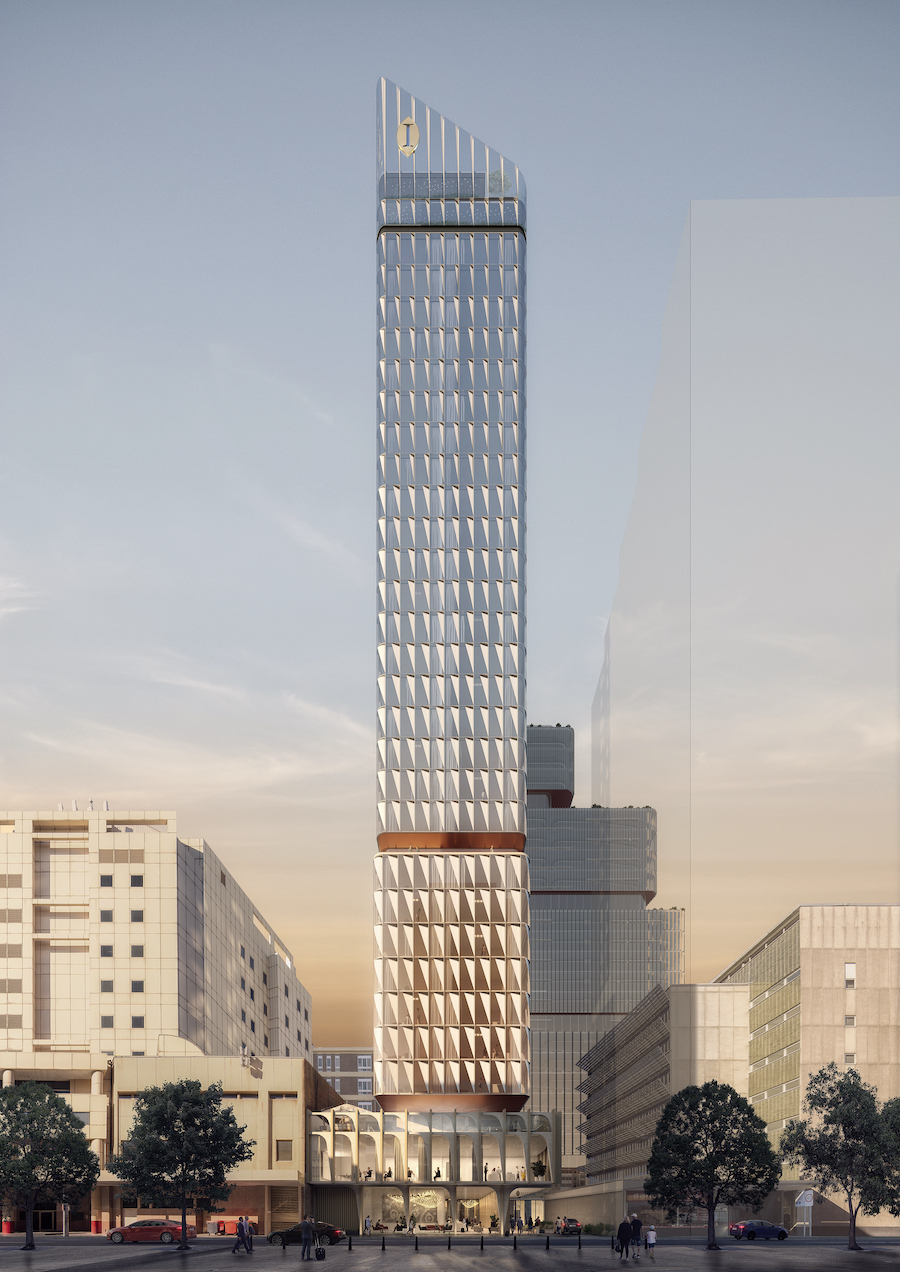 ▲ A render of the five-star Intercontinental-branded hotel is due to open in 2025.

The US-based hotel behemoth is among several accommodation brands—including QT, Sheraton and Travelodge—with a sharp focus on Parramatta as it continues to undergo a massive urban transformation.

More than $20 billion of public and private investment will be pumped into infrastructure and development in the area during the next five years.

Once considered a western suburb of Sydney, the City of Parramatta’s economy—with gross regional product nudging $30 billion—is now bigger than some of the country’s capital city CBDs, such as Adelaide (just over $20 billion).

“There’s a huge degree of construction going on out there,” Colliers national head of hotels Gus Moors said.

“You couple that with the light rail, new Sydney Metro and, in the future, it will be the closest CBD to the new Badgerys Creek airport … so there’s a lot of positives for Parramatta going forward that potentially fuels and underpins hotel development.”

Moors said the that development momentum had prevailed despite the Covid outbreaks, lockdowns and travel restrictions during the past couple of years

“The strength and the future growth of western Sydney will largely centre around Parramatta … and the reality is the hotel groups will always be willing to put their flag into the ground in these sorts of markets,” he said.

“It has been a very resilient market and a solid corporate market and increasingly so with government business being relocated out there.

“Ultimately, setting aside the current pandemic, what underpins hotels is corporate travel, particularly in CBDs and satellite CBD locations. That’s what helps them to stack up.” 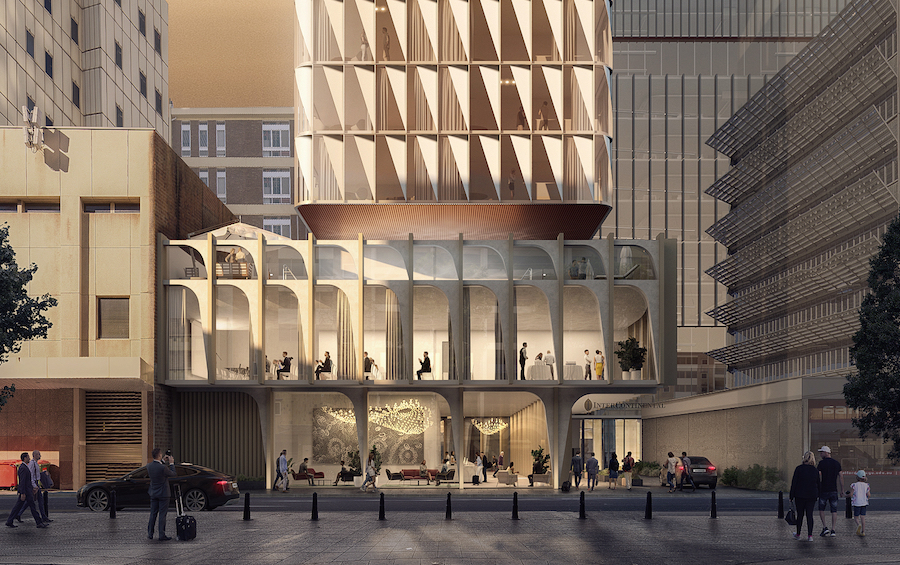 ▲ The Intercontinental will comprise 212 rooms across a slender 31-storey tower.

Moors said Parramatta also was starting to get some better leisure drivers with the 30,000-capacity Western Sydney Stadium opening in 2019 and light rail connectivity with Sydney Olympic Park.

“That gives you the corporates from Monday to Thursday and the weekend leisure and sporting event business from Friday through to Sunday and that’s what is helping underpin the feasibility of hotels in that market … also, there's the hospital business with the nearby Westmead Hospital and the like.”

He said most of the new hotels in the area were being wrapped into mixed-use developments.

“Where there is residential and commercial within a broader development play, hotels act as a good synergy with the other uses in the building,” Moors said.

Data from Colliers shows that accommodation room supply rose by 4924 rooms across the country’s 10 major markets in 2021, with Melbourne leading the way with 2339 new rooms opening in the city and 588 across the broader metropolitan area.

Almost 6850 new hotel rooms are scheduled to open nationally during 2022, according the research, with new openings set to peak in the second half of the year, particularly in Sydney and Melbourne.