Western Australian new home sales have more than doubled, moving the state leaps and bounds ahead of the eastern coast.

In the three months to October WA sales went up 132.2 per cent compared with last year, with sales elevated across the country according to the latest HIA report.

South Australian new home sales are up 38.1 per cent, Queensland 26.0 per cent, New South Wales 14.6 per cent and Victoria 2.2 per cent according to the latest HIA report.

Strong home buyer incentives vary across the states, with people looking for a new home in WA eligible for up to $55,000 from government grants—the highest in the country. 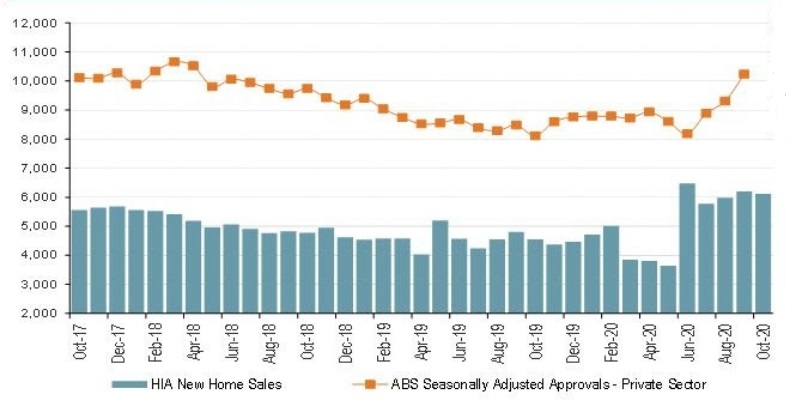 HIA chief economist Tim Reardon said the detached housing market continues to perform strongly and as it accelerates will pull the rest of the Australian economy forward into 2021.

“The strength of the market response is due to several factors in addition to HomeBuilder,” Reardon said.

“Lower interest rates and fiscal stimulus, such as JobKeeper, have also seen households more willing to spend on housing.”

Earlier in the month the Reserve Bank of Australia cut interest rates to a record low of 0.10 per cent.

“Housing loan commitments and price trends across the country suggested that conditions in the detached housing market remained stronger than in the apartment market; growth in rents for apartments remained weak in most cities,” the RBA board said.

“Members noted that prices had declined over recent months in Melbourne and, to a lesser extent, in Sydney.

“These declines had been smaller than those recorded in 2018.

The latest revision of market predictions, ANZ economists forecast house prices to grow 9 per cent in 2021.