Plans for a 38-storey residential tower in Surfers Paradise have been lodged with the Gold Coast City Council, the third DA for the area filed in recent weeks.

The latest skyscraper plans were lodged by AMFS 2, led by Ayrton Mansi of the Mansi Group and Freddie Sheene, son of the late world motorbike champion Barry Sheene, for a site at 17-19 First Avenue, Surfers Paradise.

Surfers Paradise is running hot, even by its standards—the suburb hit $1.2 billion in apartment sales in the 12 months to November.

The Gold Coast’s strong apartment market during the pandemic has created a spike in projects as units increased 26 per cent in value last year.

The plans for Nineteen on First Avenue were designed by Plus Architecture and included 35 full-floor apartments with three bedrooms and north-east facing balconies.

There was also a swimming pool, work from home suites, entertaining spaces and a gym on the lower levels as well as three levels of basement car parking.

It would replace two single-storey homes on the combined 810sq m site at the corner of First Avenue and Surf Parade. 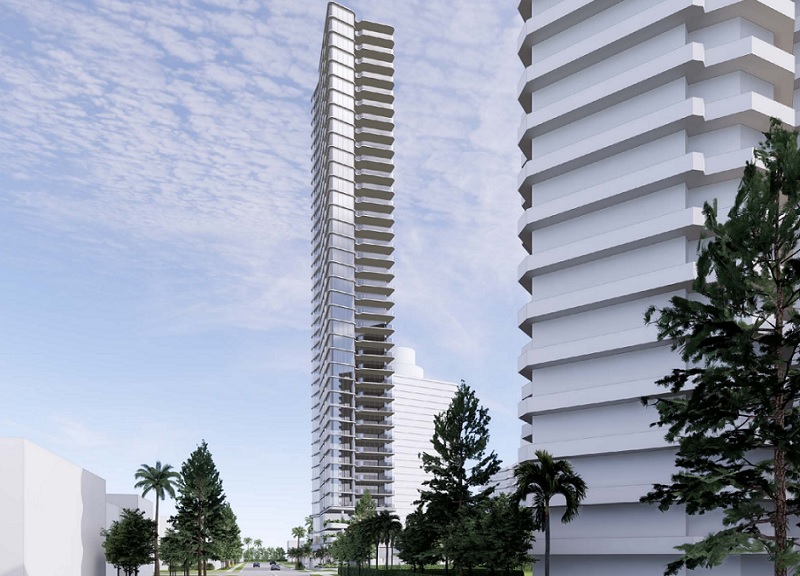 ▲ Plus Architecture used inspiration from the “dynamic theatre of the ocean” to design Nineteen First Avenue in Surfers Paradise.

“This existing character is consistent with the City Plan’s intent for Surfers Paradise to develop as a compact, high-rise neighbourhood,” the application said.

“The proposed built form incorporates elements of coastal character consistent with the existing built form within the locale as conveyed through the material and colours palette for the development.

“Being a high-end residential development, the finishes proposed are of an equivalent standard.”

In March, 2021 refinements were made to the Gold Coast city plan with mayor Tom Tate saying the city needs to be built “upwards, not outwards” in response to growing demand for new homes.

As interstate migration is expected to continue through 2022 the market fundamentals of the city are holding strong and there are no signs of an imminent bust, according to experts.