Real home prices across Australia have climbed 150 per cent since 2000, while real wages have climbed by less than a third.

Among those who can afford homes, the increase in household debt to income ratios is weighing on consumption and increasing financial fragility.

We are often told the problem lies in supply—we don’t have enough homes in the places people want them.

And while it’s true a reduction in the supply of housing relative to the population will reduce housing per person and increase housing rents, what we are seeing is something different—a growing divergence between rents and the price of housing as a financial asset that’s increasing much more quickly.

Australia has become something of a world leader in demand-driven home price inflation. Australians have been increasingly buying housing for the purpose of securing financial returns—both capital gains and rental income, in a process often described as the financialisation of housing, but one that we think can be more accurately thought of as “rentierization”.

In a working paper published on Tuesday by the University of Sydney and the University College London Institute for Innovation and Public Purpose, we argue “rentierization” best describes the increasing use of housing to extract land rents, in the form of capital gains on property and rents from tenants—a process in which Australia is well advanced.

Despite multiple major boom and bust cycles, including Victoria’s 1880s land boom and the 1890s recession that followed, land values and home prices were relatively low compared to the total value of economic activity right up the 1960s. 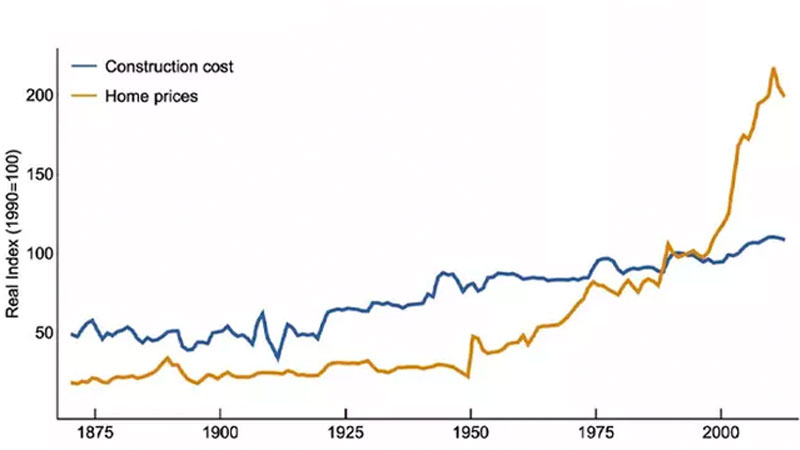 The graph shows the rise in home prices has been driven by rising land values rather than construction costs, which have grown at a rate closer to general price inflation.

It’s tempting to ascribe the takeoff in home prices to low interest rates. Low rates enable households to take out larger mortgages relative to their incomes.

But rates were also low in the 1960s (close to rates in the 2010s, when home prices were soaring) and didn’t much push up prices then.

More from the house than the wage

Low rates appear to be a necessary, but not a sufficient, condition for soaring prices. Among the other things that seem to be needed are increased access to finance, declining public involvement in housing, and tax breaks that reflect the political power of owners.

The return to land in the form of capital growth has climbed from around 3.5 per cent of gross domestic product before 1960 to 16.7 per cent of GDP since 2000.

It has become so high as to rival and at times dominate wages as a source of household income.

When the measure is greater than one it implies that the average home had a greater return, made up of rent and capital gains, than the average worker. 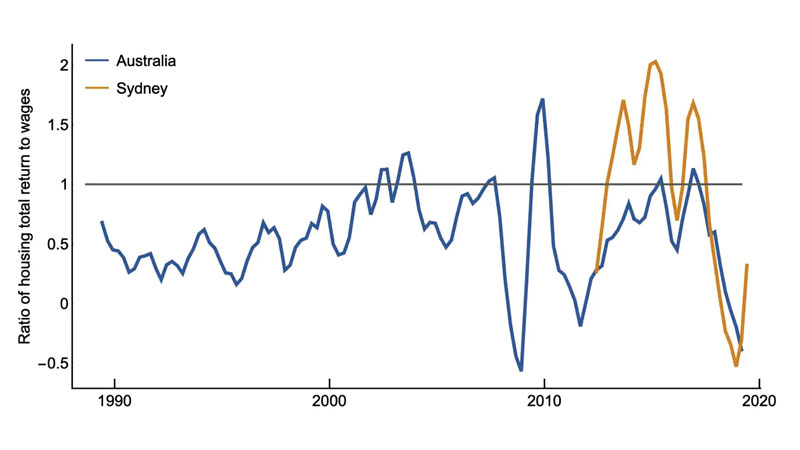 In 16 of the 29 quarters leading up to June 2019, the median Sydney home earned more than the median full-time worker earned from wages.

In Australia, housing is overwhelmingly privately owned. For a brief period in the 1950 and 1960s, public housing was created on a significant scale, but a huge privatisation program soon followed and today it represents just a few percent of new supply.

Into this environment was thrown the removal of controls on lending from the 1980s, enabling banks to expand property-related lending.

More credit flowing in to a finite supply of land generates a feedback cycle as rising prices and collateral values stimulates more lending and higher prices.

In Australia, mortgage lending grew from just under 20 per cent of GDP in 1990 to over 80 per cent today. By way of comparison, business lending climbed 35 per cent to 40 per cent.

The vast majority of mortgage lending is for the purchase of existing, rather than new, homes.

Investors push up prices for everyone

The investor share of new mortgage lending has grown from 10 per cent in the early 1990s to 40 per cent. It has given owner occupiers and first home buyers price competition they didn’t previously have to face.

Australia’s unusually generous tax concessions for investors helped. They are granted discounts on capital gains tax, while being able to deduct the full costs of operating their properties, (including interest costs) against income from any source.

Where the deductions exceed rental income, the process is known as negative gearing.

A lot will need to change in order to shift things. Mortgage credit will need stronger regulation. It may be time to revisit the credit controls used in Australia in the 1950s and 1960s, which directed investment into new rather than existing housing and helped increase home ownership.

The case for a central housing bank

Taxes should focus on land rents, in the form of increasing residential property values or windfalls from changing land use. Taxing away future rents would dent speculation.

Broadening annual land value taxes to primary residences as well as investors housing would be part of the change, introduced at a low initial rate and with options for delayed payment or borrowing against future sales for those on low incomes.

And there’s a case to reintroduce direct government involvement. A central housing bank could use its ability to supply and sell new housing to set a “home price corridor” to ensure home prices did not rise rapidly and dampen potential falls in prices.

It could also be used to provide a variety of alternative stable tenures for households, such as different kinds of renting, public housing and selling dwellings to social housing providers at discounted prices.

Challenging vested interests will be hard, but the current downturn offers hope.

As rates of home ownership fall, renters struggle to make ends meet and central banks run out of leverage to stimulate the economy with interest rates already at rock-bottom, reforms that previously appeared politically impossible might gain traction.