Property Market to Remain Subdued in the Medium Term

Housing affordability improved in all major capital cities in 2020, and is expected to continue in the medium-term based on a drop in GDP, wages and slowing population growth linked to migration.

Affordability of apartments and houses improved in Sydney, Melbourne, Brisbane, Perth and Adelaide over the year to September, according to Moody’s Investors Service.

Australian households with two income earners needed 23 per cent of monthly income to meet mortgage repayments on new loans last month, Moody’s found. This figure is down from 25.1 per cent a year earlier.

“We expect low-interest rates for the foreseeable future and lower housing prices over the next 12 months, further improving housing affordability,” Chen said.

“Conversely, household incomes will come under pressure in coming months as coronavirus-related government income support measures end, but in respect of housing affordability, we do not expect this to outweigh low mortgage interest rates and lower housing prices.”

A recent report from electronic settlements platform PEXA found that from January to September 2020, the overall median settlement price fell 14 per cent in Victoria and 9 per cent in New South Wales.

Although PEXA's Property and Mortgage Insights report shows a slight lift in NSW property values in the September quarter, while Victoria declined almost 5 per cent for the period.

“An additional dip in economic conditions following the easing of fiscal stimuli would likely result in house prices and housing activity declining further in the medium term.

“Even after recovery in the key drivers of housing activity, there is likely to be a lag before we see the effects in property values and sales.”

Looking ahead PEXA predicts that GDP and household income are expected to remain weak over the next few quarters, indicating a downside risk for Australia's housing market activities in the short-to-medium term.

While border closures will reduce net migration and housing demand, PEXA notes that a fall in overseas student numbers will likely reduce demand for rental properties, especially around universities and in capital cities.

“As a large proportion of migration comes from students who remain in Australia after finishing their studies, the effect on the overall housing market could be quite long-lived.”

Close to zero interest rates are likely to remain for the medium term, which the report says would help “dampen the magnitude” of any decline in housing market activity.

The Reserve Bank of Australia is expected to consider a cash rate cut in its November meeting, a move that could see the official cash rate slashed from its already historic low of 0.25 per cent. 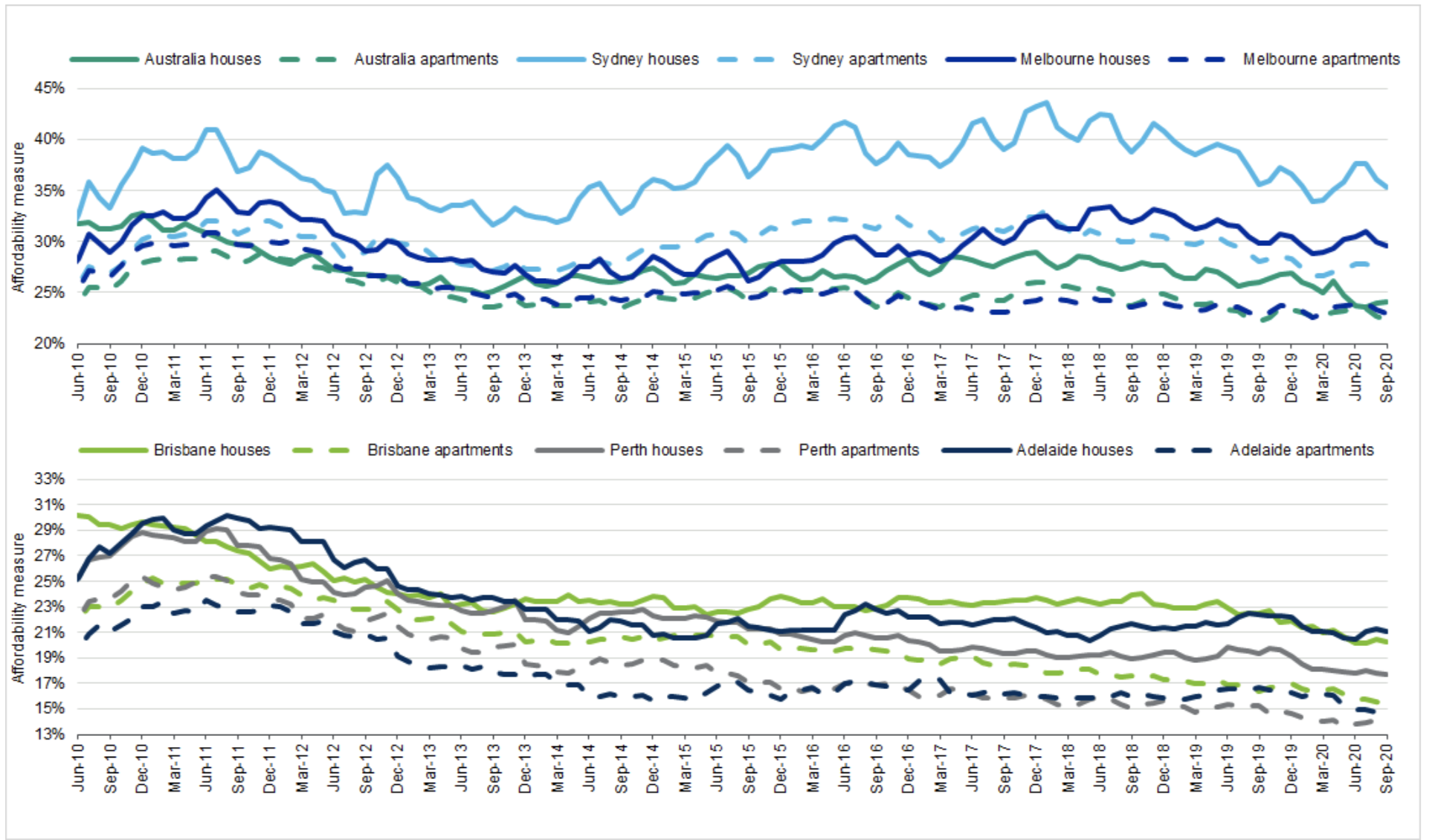 In Sydney, Moody’s found that new borrowers needed 29.9 per cent of household income to meet mortgages repayments in September, compared with 30.9 per cent a year earlier and 32.7 per cent on average over the last 10 years.

In Melbourne, new borrowers needed 24.6 per cent of household income to meet mortgage repayments in September, compared with 27 per cent a year earlier.

Melbourne’s median house price fell 2.2 per cent in the five months to September, this is an increase of 4.1 per cent over the year to September.

Brisbane borrowers needed 18.7 per cent of household income to meet mortgage repayments. This the lowest in a decade and down from 21 per cent a year earlier, Moody's notes.

Brisbane house prices have remained stable over the year to September.

And Australia’s most affordable capital city for housing, Perth saw new borrowers needing 15 per cent of household income to meet mortgage repayments last month, the lowest in a decade, and down from 17.4 per cent on last year, according to Moody's.

Perth’s median house price declined 1.1 per cent over the year to September.