Weakening household income, reduced population growth and subdued demand will depress the housing market by 10 per cent, according to ANZ.

The revised forecast, brought ahead by coronavirus shutdown measures, is a sharp reversal from ANZ's January forecast of 8 per cent dwelling price growth this year.

ANZ now predicts house prices to fall in Sydney and Melbourne by 13 per cent, Brisbane and Darwin by 7 per cent, Adelaide 6 per cent and Canberra, cushioned by the high proportion of government worker, by 5 per cent.

Perth's housing market is tipped to perform the best with a decline of just 2 per cent over the next two years. 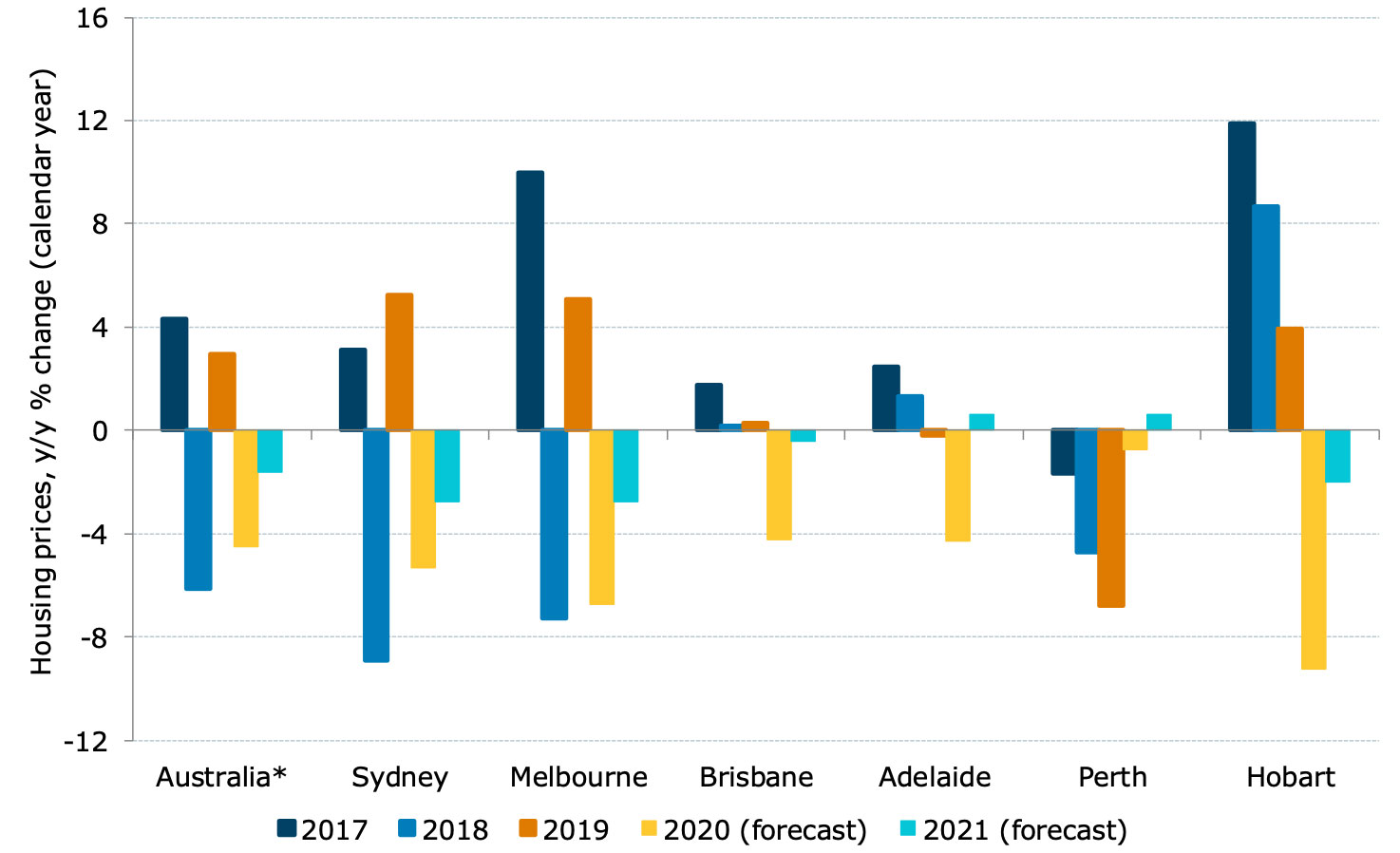 “We anticipate prices will bottom out in mid-2021 as affordability improves, but the recovery is likely to be relatively gradual given that unemployment is expected to remain above 7 per cent until 2022,” ANZ senior economist Felicity Emmett said.

ANZ expects unemployment to rise to just under 10 per cent, the highest since the early 1990s recession.

To date, nearly a third of Australian households have reported a deterioration in their finances due to Covid-19 and analysts expect that number to grow.

“This collapse in income will create significant uncertainty for households and leave many unwilling to commit to buying or building a home,” Emmett said.

Emmett noted that markets heavily reliant on sustained population growth, such as Sydney and Melbourne, were likely to experience the steepest declines as a result of the border closures.

The federal government estimates that Australia's net overseas migration is set to fall by more than 85 per cent in 2020-21.

With the rental market under pressure from both reduced demand and increased supply, the incentive to invest in property is expected to remain low for some time.

“While the deferral of home loan repayments will help prevent forced sales, the collapse in demand in the face of the extremely uncertain outlook will drive prices lower over the next year or so,” Emmett said.

The renewed outlook mirrors CBA's mid-April forecast of a 10 per cent plunge along with UBS—in which its “full-pandemic scenario—projects a decline of at least 10 per cent in house prices over the coming year. 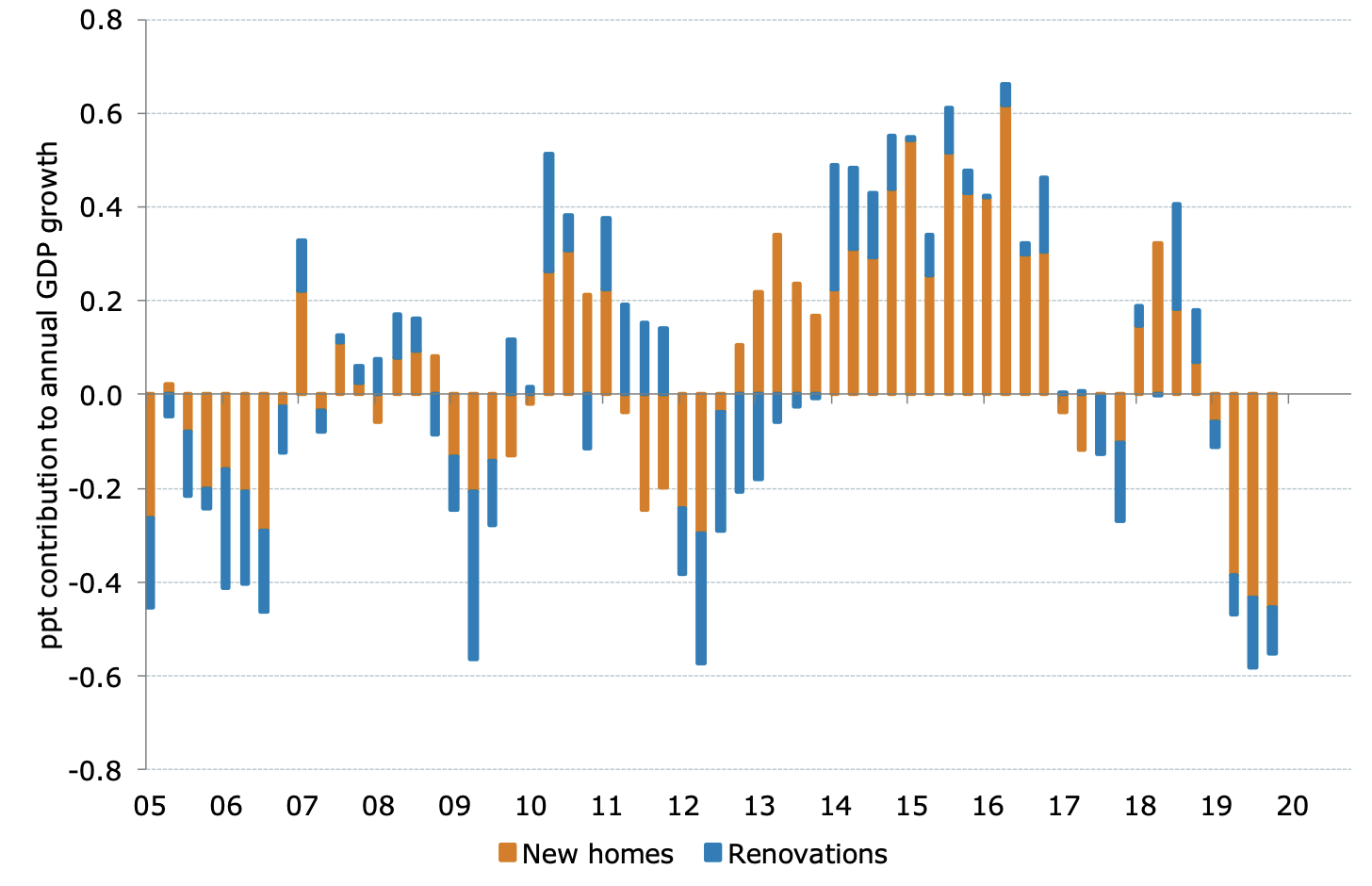 As a knock on, ANZ expects housing construction, which had already been falling since mid-2018, to take a substantial hit from pandemic shutdowns

Construction activity is projected to to decline another 15 per cent through 2020-21, bringing the cumulative peak-to-trough decline to 25 per cent.

If that was to occur, it would mark the largest decline in construction since the 34 per cent collapse in activity in the wake of the introduction of the GST in 2000-01.

“Housing construction took more than 0.5pp off growth in the year to December 2019, and looks set to continue to be a drag on growth” Emmett said.

“The uncertain income outlook and the sharp reduction in population growth will curtail demand from both owner occupiers and investors.

“We expect construction activity to continue to fall through 2020, bottoming out in mid-2021 before turning higher.”