The 2600sq m site, an amalgamation of a collection of low-rise residential properties between 75 and 85 James Street, will be redeveloped into a new office, retail and dining complex.

The proposed 5-level commercial building will include eleven ground floor retail tenancies targeted at “high-end” fashion brands, health and wellbeing as well as restaurants and cafes.

The 6100sq m building will feature a central piazza and arcade linking James Street and Southwick Lane at the rear of the building.

The development will sit above three levels of basement car parking for 145 cars and end-of-trip facilities which will be accessed via Harcourt Street.

It marks a quick turnaround for the developer after picking up the first portion of the site, 75 and 77 James Street, in June 2020 for a combined $2.8 million before moving on 85 James Street in November, outlaying $3.4 million. 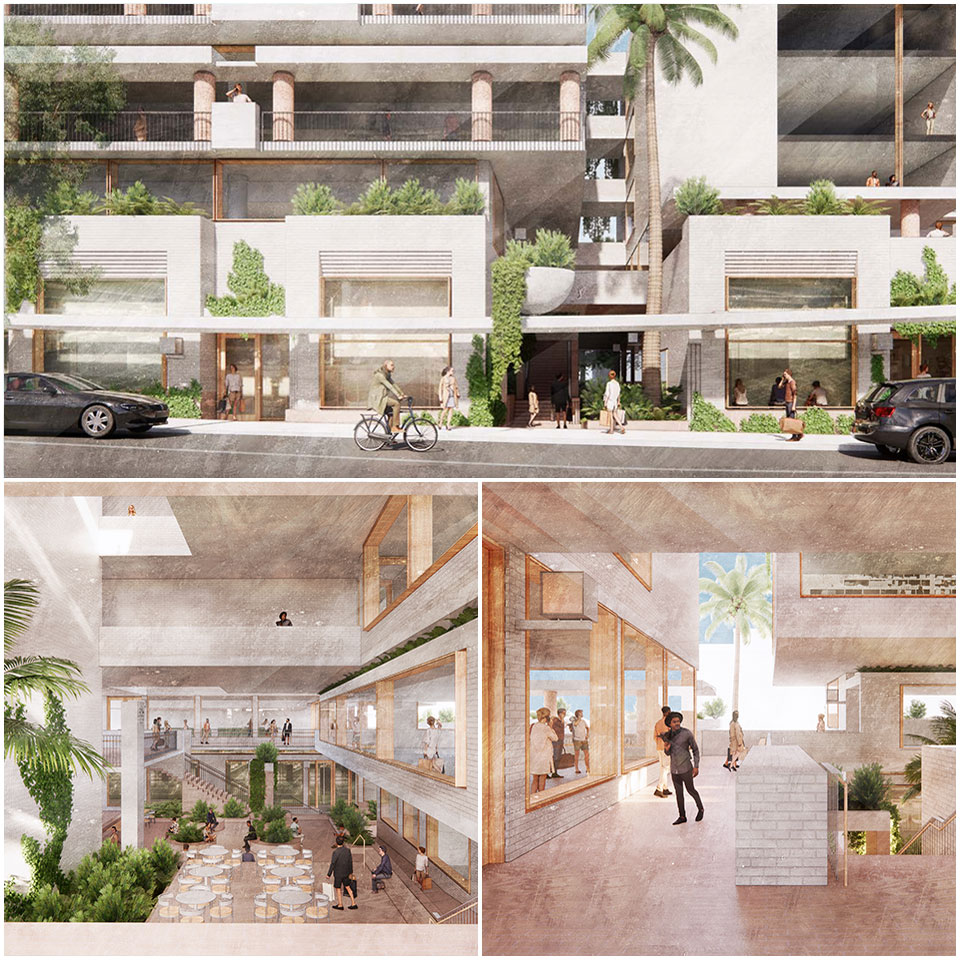 ▲ The building's piazza will include stair access to larger retail, wellness and hospitality tenancies on level one. Image: Richards and Spence

Soon after, Forme directors David Calvisi and Byron Griffith approached the owner of 79 James Street, the largest portion and centrepiece of the site.

The private owner, who built and held the low-rise apartment building, decided to sell the property after Forme matched an offer made by a rival developer intending to redevelop the property into a Coles supermarket.

All three pre-1911 homes, at ​​75 and 77 James Street and 228 Harcourt Street, will be relocated while the apartment and dining complex will be demolished.

Calvisi and Griffith told The Urban Developer the proposed development ​​would “extend the vibrant and recognised retail strip” which currently featured over 130 specialty stores, including high-end boutiques such as Scanlan Theodore, Sass & Bide and Calexico, as well as top restaurants and bars.

“James Street is a neighbourhood precinct which has reached national acclaim for the vitality of its retail and hospitality offering, however, the precinct stops dead at Arthur Street,” Griffith said.

“Expanding along its namesake, the precinct has evolved by natural progression to include two hotels and a myriad of small commercial tenancies.”

“We have now managed to unlock a site which can extend the commercial and retail strip into what we are candidly calling ‘James Street east’ and, if realised, would be built on one of the street’s last remaining commercially-zoned sites,” Calvisi said.

“We are proposing a prime mixed-use endeavour to continue the fine grain tenancies synonymous with the precinct while supplying much needed small to medium office space.” 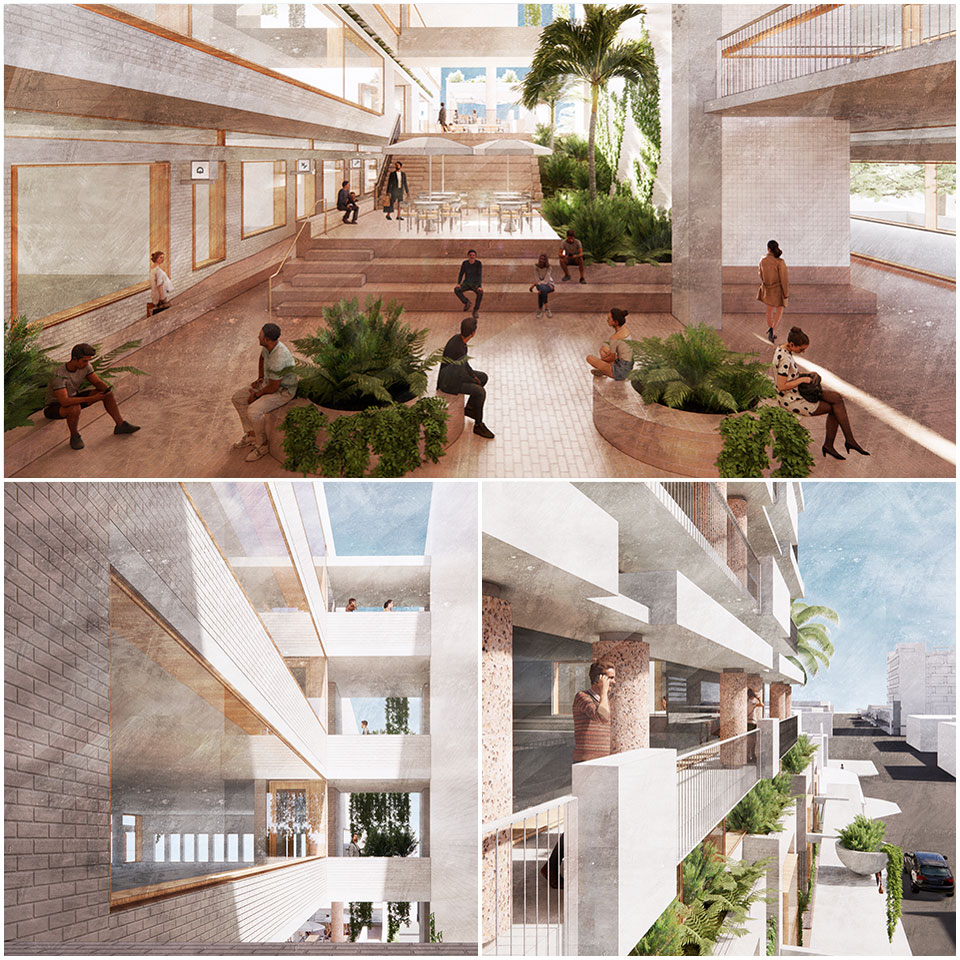 ▲ The building will be topped with a rooftop terrace with views across to the Storey Bridge and Brisbane river. Image: Richards and Spence

The sought-after precinct currently has zero vacancy for office and retail tenancies.

Richards and Spence, the Brisbane-based architecture firm behind the broader James Street precinct, including the 175-room, 5-star Calile Hotel and James Street Market has been enlisted by Forme to design the office precinct.

Calvisi and Griffith said they had been in close contact with brothers Cal and Michael Malouf, the developers responsible for The Calile, to discuss the opportunity to create additional retail and office tenancies along James Street, a mix they had “fine-tuned” while managing the strip.

Over the years, the Maloufs have guarded against unhealthy competition and retail cannibalisation at James Street, opting for quality over rental quantity.

The family has also promoted home-grown and Australian stores and designers, rather than globally recognised brands.

“We want to provide for the community and ensure that our development is a continuum of James Street and has lots of public space to draw people into a new and thriving retail destination,” Calvisi said.

“We intend on holding onto this asset for a long time and we feel like we are staying true to what has kept James Street such an exclusive and unrepeatable location.

“For us, this development will be a generational asset, and working with Richards and Spence has allowed us to deliver on our broader vision.”

On the Gold Coast, Forme has wrapped up construction on Norfolk—a 10-level residential building of just 15 apartments on Goodwin Terrace in Burleigh Heads, designed by architect Koichi Takada.

The project achieved $73 million in pre-sales for its 15 apartments and in January had its two-level five-bedroom beach house with pool snapped up for $6.2 million by prominent local entrepreneurs and philanthropists Cathie Reid and Stuart Giles, while the penthouse was bought for $9 million.

On a neighbouring site Forme has sold out all eight full–floor residences of its under construction Luna development, designed by Plus Architecture and Mim Design, for a combined $37 million.

That 1000sq m site, which was amalgamated by Forme over six months, is currently home to a low-rise unit block. It is directly across the road from beachfront parklands.