The tough sell is just beginning for Australia’s development sites after the feverish land rush of the pandemic-led property boom.

Tightened monetary policy, rising inflation and interest rates, higher construction costs and a shrinking pool of contractors available to developers after the collapse of a string of builders have simultaneously pulled the plug on the party.

Overheated property markets have rapidly cooled with demand from developers for new sites slowing to a glacial flow nationally in the December quarter of last year.

Latest figures show development site deals worth about $1.5 billion were recorded in the fourth quarter—not even half the transaction value of the third quarter.

In comparison, $5.4-billion worth of sites changed hands in the same period of 2021 as demand for sites hit scorching levels. During the past five years, development site transactions in the December quarter have averaged about $3.4 billion.

Overall, $9.7 billion in development sites transacted nationally in 2022—down about 30 per cent on the previous year.

“That’s kind of indicative of what’s going on in the market,” Martin-Henry says.

“As the year progressed and those economic pressures started to mount, including eight consecutive rate rises … obviously causing a lot of concern, fewer and fewer deals were being struck in 2022. 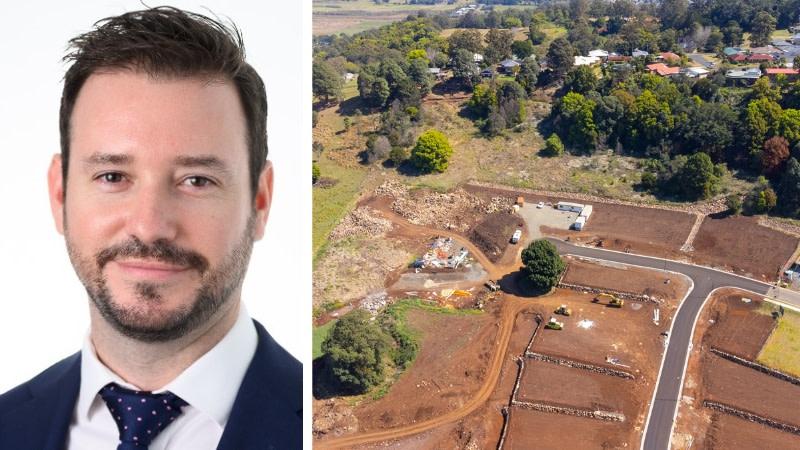 ▲ MSCI head of Pacific real assets research Benjamin Martin-Henry: it has been a noticeable falling-off-the-cliff.

“Ultimately, the culmination of that was we saw a massive drop off in development site transactions in the fourth quarter.

“There was so much uncertainty in the last half of last year and now everyone has pressed the pause button and is kind of waiting for what the future holds.

“Not a lot of developers are pulling the trigger on projects if they don’t have to. The ones that are already building are committed but, of course, you’ve got the [higher] cost of construction which is another double whammy.”

Martin-Henry also points out that not all markets are moving in sync and each of the major assets classes—office, industrial, hotels and residential—are “moving at their own pace”.

“There’s still a few question marks over the office market and it’s going to be the interesting one.

“As always with residential, it’s going to be market specific. Some pockets of Sydney are going to continue to boom and some pockets in Melbourne as well I’m sure.”

On the Gold Coast, development sites that changed hands as little as 12  months ago are already being recycled back to the market.

“They’re everywhere—there’s plenty of development sites for sale … the ones that were available a year ago are available again,” says Barry Morris, one of the city’s most successful and prolific developers.

“They’re coming back to the market because developers have either overpaid or over-leveraged and they can’t get builders. 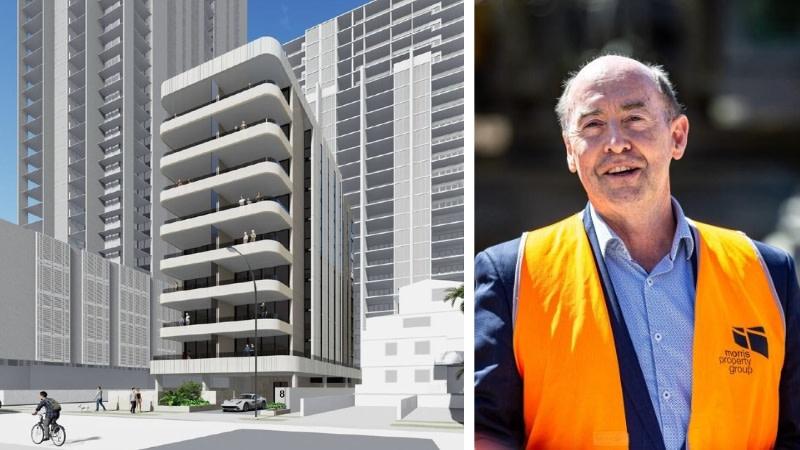 ▲ Barry Morris: this is exactly what the government was wanting to achieve in slowing down the economy.

“So, you’ve kind of got a perfect storm of events where people can’t stack projects up.

“And let’s be honest, this is exactly what the government was wanting to achieve in slowing down the economy … [but also] the market probably could not keep going at the rate it was because there’s just not the manpower to build all these projects.”

Save for a couple of simmering hotspots where developers are still actively seeking sites, he says: “There are no buyers”.

“The clearance rate of sites is not as buoyant as it was … you’re not seeing that wave of developers coming up from the southern states who are just sort of riding into town and paying hefty prices for land,” Morris says.

Late last year, his company Morris Property Group procured a number of sites and it would seem he has been fending off sales agents ever since.

Another agent came spruiking a site with an existing block of 18 units on it and Morris told him frankly “the highest and best use of the site right now is the 18 units that are on there”.

“There is no development opportunity there unless someone wants to buy it and sit on it for a number of years,” he says. “Frankly, we saw all this coming … and I don’t need to put a site on the books for 10 years which might only make 2 or 3 per cent.

“We’re happy with our book at the moment and we’re progressing those sites through the development application phase and bringing them to the market.” 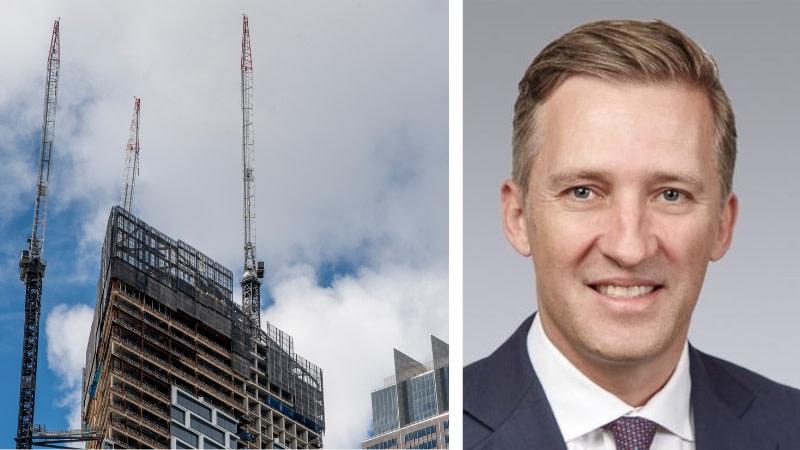 Not that Morris is likely to pass up any good opportunities if they come his way.

“I think it will be somewhat subdued for most of the year but the market has probably normalised back to where it was—and there is still demand,” he says.

“There’s still a lot of population that has moved to the Gold Coast and I think there are a lot of sites that have DAs and have potential of coming to the market to accommodate that demand.

“But at the moment land costs are too high, construction costs and interest rates have gone up and, guess what, the banks now want you to make more money before they finance anything because obviously they assess a higher risk.

No doubt, therein lies the opportunity.

Colliers national director of residential development site sales Guillaume Volz says he is quietly confident it will be an active year, but when it will kick back in is the multi-billion-dollar question.

“Fundamentally, the site market has been pretty strong for a couple of years but market conditions definitely changed towards the back end of last year,” he says.

“With the negative narrative around construction costs and interest rates, things slowed down but underlying all that there is still demand, and there has been this constant desire and need to buy sites.

“Over the last six months and even before that, developers have been a little bit cautious. Pipeline and stock levels are down generally and that has been playing out in different ways. Right now, that's with record-low rental vacancies and strong increases in rents.

“So, that supply needs to be replenished and I think we’ll see some good opportunities for buying this year.

“I think developers have just been waiting for a trigger moment where they can sort of predict the future a bit better before they get back in and take a position in the market.

“Once we get a couple of months of successive pause in the interest rate increases I think that will be a big moment and things will start turning again pretty quickly.

“Also, developers need to be able to manage construction costs and that will come through as supply lines start to improve, which they’re already doing at the moment.” 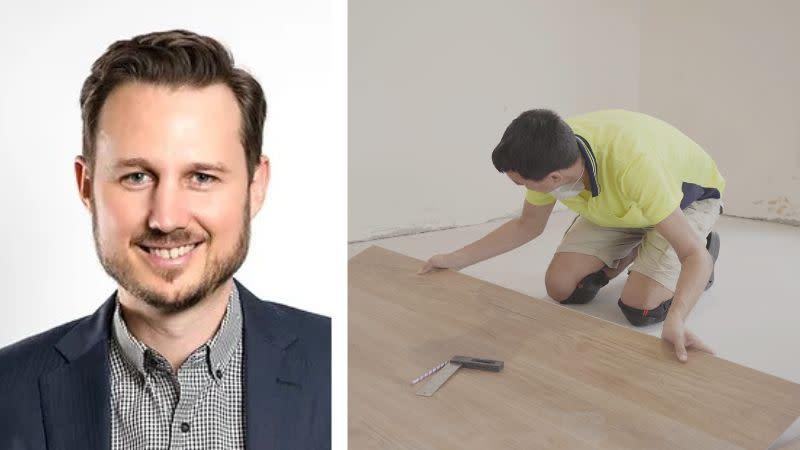 Brisbane-based Boulder Capital managing director Damian Winterburn says higher construction costs were having the biggest impact on the market, above and beyond tighter lending conditions and rising interest rates.

“The cost of funding is a bit higher but it’s relative to where people have been,” he says. “Historically, even now it’s not that high. We’ve just been in an extremely low interest rate environment and that’s what everyone is comparing it to.”

Winterburn also says although interest rate rises had resulted in a softening of the retail side of the market and drop in the rate of pre-sales, if put into context it is  still a “reasonably good market”.

“It’s just the market is not stupidly crazy hot … it's just come off where you could produce almost anything and it just sold,” he says.

“Right now there’s projects we’re funding and they’re still getting 40 to 50 inquiries a week. The demand is there but buyers are cautious and sales are taking a bit longer.

“The problem now for those developers who have picked up sites in those lower grade positions is the cost for them to build their projects has grown at such a rate relative to the revenues.

“That’s why a lot of them are having to resell and we're seeing these sites recycled back to the market.

“In some cases, they just can't get a builder and, if they can, the build price is at such a high rate the project is no longer viable.”

Ironically, as projects don’t proceed then the demand for some building products will fall and therefore prices will soften as suppliers have to keep their supply chain going.

According to industry sources, some trades and suppliers are already starting to see things come off and their workbooks are not as busy as they were anticipating.

Morris says to an extent property development is a mathematical equation.

“There’s a lot of factors that go into that mathematical equation but at the end of the day you've got only a certain amount of revenue. The government takes a big chunk and what’s left has got to cover land, finance, construction costs, fees and charges and a profit.

“So, if construction costs have gone up 20 to 30 per cent, something’s got to give. That’s sort of the brutal side of the business … the bottom line is it’s a numbers game.”