[+] Crunch Time: Inside the Condev Crisis

A builder walks into a room full of big-name property developers and asks them to stump up millions of dollars so his company can finish their projects.

Unfortunately, there is no punchline.

That much was clear as The Urban Developer spoke with teetering Queensland construction firm Condev’s founder and executive chairman Steve Marais on Monday night.

But despite the grim circumstances surrounding his Gold Coast-based company, he still managed to indulge in a slight chuckle at his own expense.

“I haven’t had such a bad headache in a while,” he mused.

Only a few hours earlier, Marais and Condev’s executive director, his wife Tracy, had fronted 15 developers and other stakeholders—with projects worth up to $1 billion hanging in the balance—to tell them that without their financial support the writing was on the wall.

That was not a meeting noted on their work calendars a week earlier.

Such is Australia’s pressure-cooker high risk, low margin construction sector and the currently highly volatile environment its builders are working in—pushing many of them to the wall.

Now the question is what happens next.

We found out Wednesday morning. The outcome was squarely in the hands of developers and their funders on Tuesday night—some of whom had flown into the Gold Coast from interstate to attend the emergency meeting.

Marais confirmed that they were unable to strike a better deal for Condev's 18 projects and will appoint a liquidator.

“We are absolutely devastated for the Condev family of employees, our tradespeople and our affiliates,” Marais said. 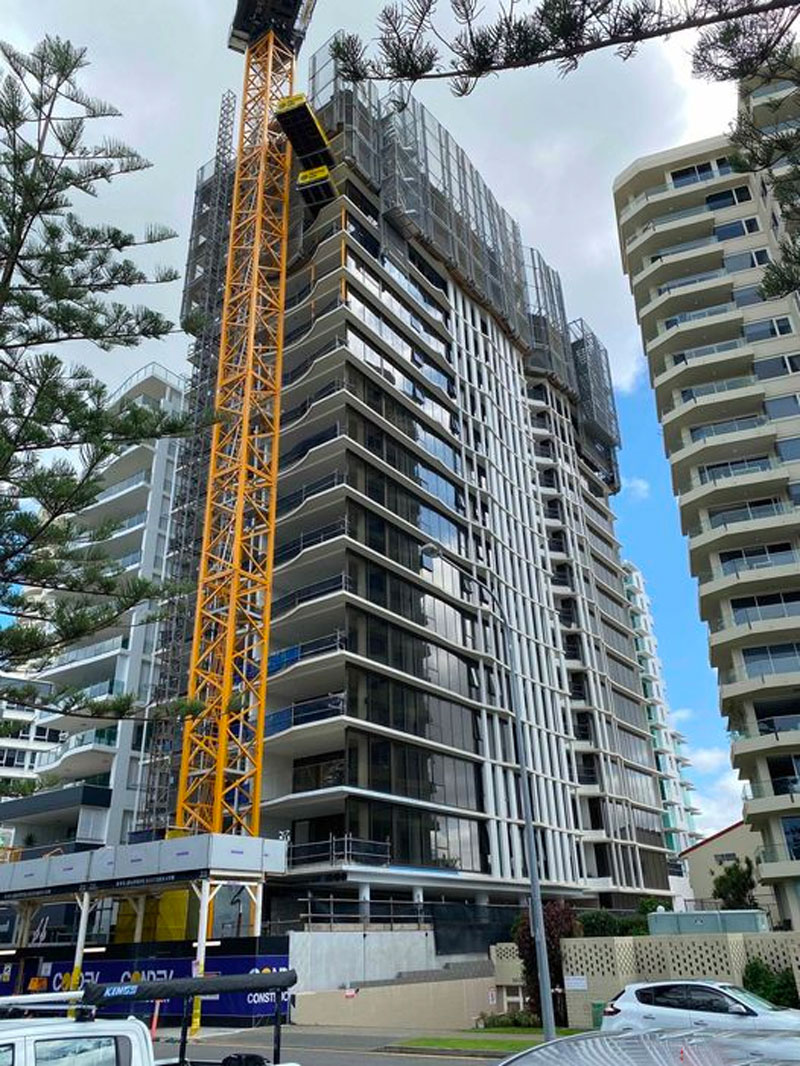 Now, the developers of its projects—more than 10 on Queensland's Gold Coast—will risk expensive project delays as they scramble to secure another builder to restart their projects.

Condev had given them 24 hours to consider and crunch the numbers on a proposed “roadmap” going forward that Marais says will ensure the company can get the jobs done.

Asked by The Urban Developer on Monday night about the dire predicament and if the family business can survive, Marais said without hesitation: “Absolutely, but we need a collaborative approach from people.

“What we’ve asked the development group is that they consider our roadmap and come back to us by no later than close of business on Tuesday.”

We can now report that the proposal was rejected.

That roadmap Marais said involved “a fractional contribution”—albeit totalling $25 million—from the developers in incremental payments as the projects progressed.

“We’re not acting because we have concerns about today and tomorrow. We just don’t want to kick the can down the road. We need to get clarity and decisions.

“At the moment our subbies [payments] are up to date, the company has assets and we’re liquid … we don’t want that to be compromised as we try to tough it out.

“But based on our forecasts on these projects that have got another year to finish it gets really challenging down the road and we want to do what’s best in everybody’s interests while we still have capacity to do that.” 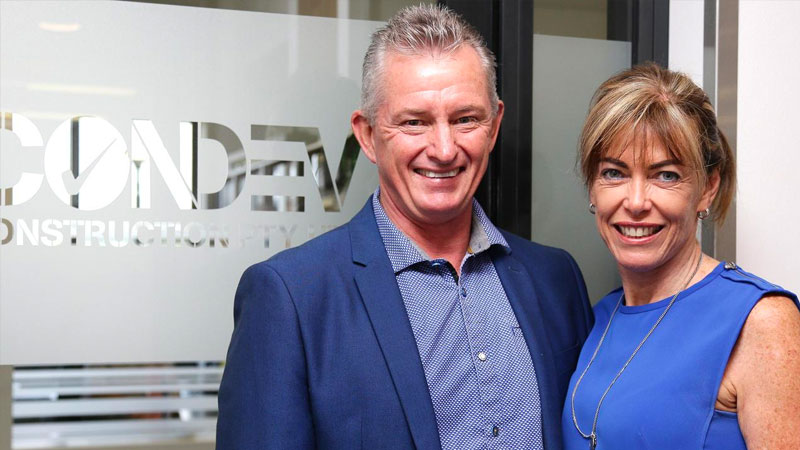 Marais said the overall sentiment in the room packed with majoir property players on Monday afternoon was “supportive and appreciative of the honesty”.

“Many of these developers we’ve done multiple projects for and we have developed wonderful friendships. Under difficult circumstances it was good to see them there and to hear them voice their support.

“There was a lot of head nodding in the room and Tracy even got a round of applause—so we weren’t in a hostile environment.

“From that aspect it was touching but obviously at the end of the day we’re talking about some commercial realities that they’ve got to adapt or adjust to."

Over the weekend it was revealed Condev had sent out an email to staff and clients informing them that after preparing financial projections it had sought legal advice and swiftly decided to call the emergency meeting.

It said the company had been hit by a perfect storm of labour shortages, price hikes and flood damage that had impacted its ability to deliver projects on time.

Also, it cited the recent collapse of Probuild as having “significantly impacted suppliers and subcontractors and their ability to continue to provide services to the industry”.

Marais said the realisation of Condev’s looming crisis came to light only late last week after the company’s new director of finance had done a thorough forecast into June 2023 and "presented a scenario to us".

“That’s really what the trigger was. That was the realisation that we needed to act.” 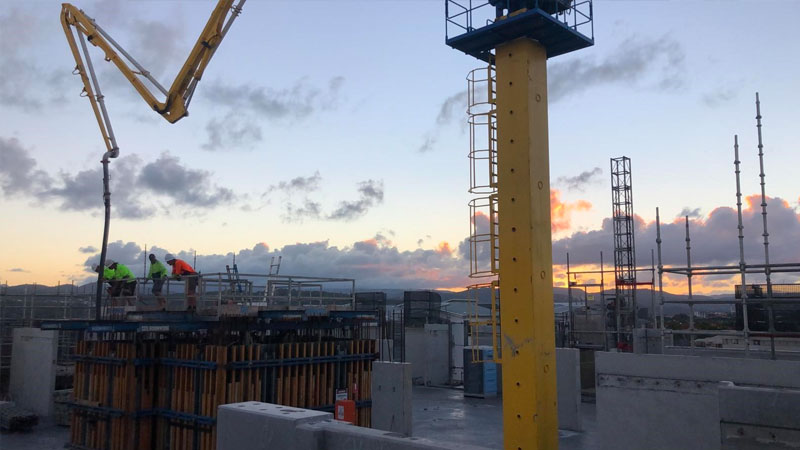 ▲ The $200-million Capital Court towers at Varsity Lakes after the level eight concrete pour in February.

He dismissed as “just rubbish” claims by the Construction, Forestry, Maritime, Mining and Energy Union that Condev was “a collapse waiting to happen” as a result of underbidding on jobs, poor project management and quality control.

“Because we’re not part of the CFMEU we’ll have mud flung at us and accusations made that can’t be substantiated but still stick.

“We’ve always had a pretty conservative approach to our workbook and we very seldom enter into the competitive market. We get elected into a very select group to tender and we’re often successful from second.

“The circumstances we are now faced with I sincerely believe are not unique to us.

“There were a lot of questions from the people in the room—the ones being asked to adjust contracts and contribute to the cost of construction—about what the risks are going foward, what’s the next swarm of locusts that’s going to fly across the construction industry.

“Steel has gone up 80 per cent since we signed contracts at fixed rates 18 months ago and steel is in almost every element of our buildings.

“With all this stuff going on with the Ukraine and Russia it has recently just ramped up again and we just thought ‘oh my god, not again’.

“In south-east Queensland, the industry also has had 60 week-days of rain in the last year, which is effectively three months of construction that has been lost … and keeping some of those big sites open costs us $250,000 a month.

“So, there has to be a recalibration of what the builder is expected to tolerate in the context of both the contract and pricing.

“That kind of recalibration has already started because builders are now pricing and developers can’t get their feasibilities to stack up.

“And the only reason for that is that builders are now conscious of so many variables and the risk it imposes on their sustainability. They weren’t in September and October 2020.” 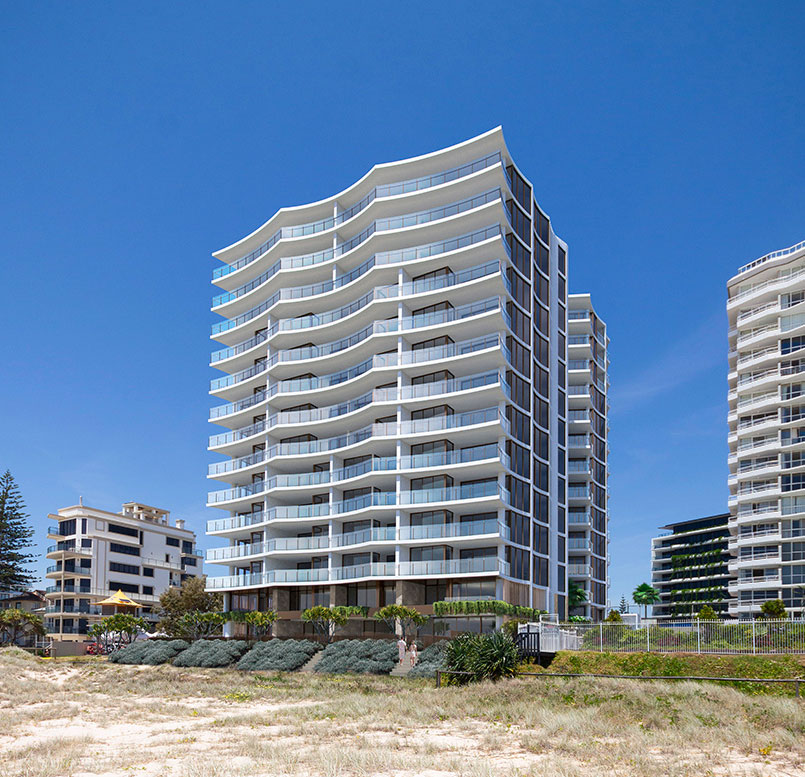 ▲ Alegria, Palm Beach, another one of Condev’s slated projects.

Condev, which was founded in 2002 and last year reported a loss, currently has 18 projects under construction in south-east Queensland, with 14 on the Gold Coast. It has won numerous awards and was involved in construction of much of the 2018 Commonwealth Games infrastructure,

“We’ve answered every call, we’ve responded to every text. We’ve spoken to all of our developers that have had queries all through the night last night and this morning and now tonight.

“I’ve committed to people that I’d be there and I’d see the projects through.

“At the end of the day building is not a Ponzi scheme, we just want to make sure we’re always in the best position to honour our commitments, and we are and we have … but the way prices are trending we would be stretched.

“We’ve already lost what we’ve lost but we wanted the people in that room to realise the costs that we've absorbed to date.

"We're not asking them to save Condev as media reports are suggesting. We're just trying to do what's best for them. All we’ve done is put a proposal in place that we believe is the best outcome for them that makes everything achievable.

"Everybody has unique circumtsances and they have to do what's right for them ... if they don’t come to the party, we’ll just have to refer the decisions on our next step back to our solicitors.

“This is not a good scenario for anybody but to be a builder you’ve got to be brave.”

Editor's note: In a statement released on Tuesday evening, Condev executive chairman Steve Marais confirmed plans were being finalised to appoint a liquidator. This article has been updated to reflect this news.