The frustrated mayors of three North Sydney municipalities are due to meet Friday, October 7 to discuss what’s become a “war of attrition” with the New South Wales government over planning proposals.

North Sydney, Lane Cove and Willoughby councils say the Department of Planning and Environment has not been listening to their views on development within the three municipalities for the past four years.

One senior office described a “conga line” of developers lining up to take advantage of a NSW government strategy document that recommends radical changes in height, floor space and setbacks within three councils’ boundaries.

At least four developers have taken their planning proposals to the Sydney North Planning Panel after North Sydney refused to support the plans.

In three of those cases, the planning panel sided with the developers and supported the proposals for gateway determination, allowing plans to go to public exhibition.

The most recent of the four—a proposal for an 18-storey mixed-use tower in Pacific Highway, Crows Nest—is still waiting panel determination, again after North Sydney Council refused to support it.

That proposal, at 360 Pacific Highway, was lodged in December last year by town planners Urbis on behalf of Galifrey Property Pty Ltd, which represents more than a dozen owners of the 1406-square-metre site.

The developer of the 42-apartment tower, on a three-storey retail podium and designed by Nettleton Tribe Architects, sought an amendment to building height which would allow for a structure of just over 160m—more than 16 times what is currently allowed.

As with other developers, they pointed to the St Leonards Crows Nest 2036 Plan—developed by the NSW government as a strategic land-use and infrastructure guide for future development in North Sydney. Specifically, it envisages nearly 6700 new homes, a doubling of employment floor space for up to 16,500 new jobs, and all by 2036. And an increase in maximum height allowances. ▲ A render of the tower proposed for a site at 360 Pacific Highway, Crows Nest.

A draft of Plan 2036 was opened to public submissions for 16 weeks in October, 2018. About 900 submissions were received, 59 from developers and landowners. Most were in favour of the plan, including the North Sydney Council.

“Most of it reflected what had been careful planning by North Sydney Council to meet the demand but also the requirements of the state government for population targets, both residential and commercial, in that precinct,” North Sydney mayor Zoe Baker says.

But, Baker says, 18 months after the exhibition finished, a final plan was released with significant differences between the draft and the final versions.

In the draft, for example, a maximum height of 18 storeys and a floor-space-ratio (FSR) of 6:1 was allowed. However, in the final plan those had increased to 24 storeys and an FSR of 7.5:1. The council says there was no consultation.

“There are 29 sites, particularly on the western side of the Pacific Highway, that suddenly got a windfall between what had been exhibited in terms of maximum building heights, and what was ultimately made under the plan,” Cr Baker said.

Developers were quick to pounce. And then bypass the council.

A planning proposal for a 13-storey mixed-use tower at 270-272 Pacific Highway in Crows Nest was refused by North Sydney following a rezoning review application. The developers went to the Sydney North Planning Panel, which the council says then supported the application.

The panel also supported a rezoning review application for the Fiveways Site—so named because of the intersecting roads at Pacific Highway—where developers want a 16-storey mixed-use tower with 129 apartments and some ground-floor retail. 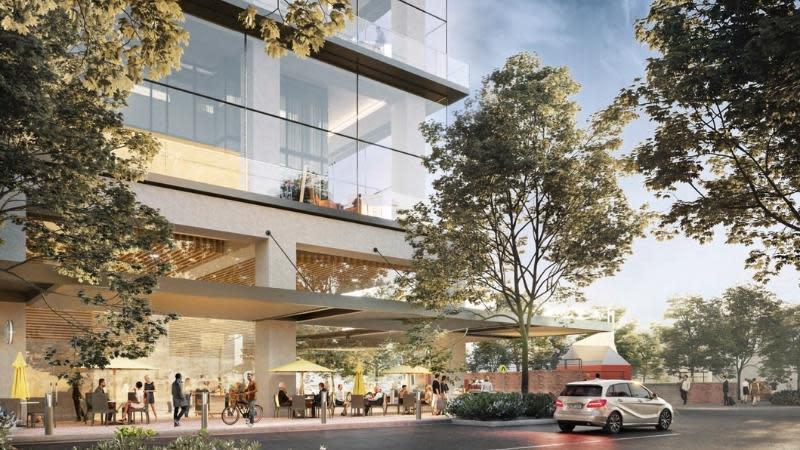 ▲ Crows Nest is one of six new stations for the Sydney Metro and is a key driver of the strategy for the St Leonards and Crows Nest 2036 Plan.

And in a report published in April this year, North Sydney Council strategic planning team leader Neal McCarry recommended the council not support a 24-storey mixed-use commercial and residential building at 378-380 Pacific Highway.

The St Leonards Crows Nest 2036 Plan has not been gazetted; it is simply a guideline for future development.

“But what is important and what gives it statutory teeth,” according to the senior planner who spoke to The Urban Developer, “is Section 9.1, it’s a ministerial direction.”

The section reads: “The Plan is implemented under Section 9.1 of the Environmental Planning and Assessment Act 1979, requiring future rezonings to be consistent with the Plan.”

Baker says they have written many times to the planning department and she’s met the planning minister Anthony Roberts to raise the issue.

“And it’s a very simple thing we’re asking for, which is to adopt the already significant additional heights that were in the draft plan,” she said.

“And they just will not budge on it.” “These issues continue to create difficulties in the plan’s implantation and represent a major impost on council resources, as council is obliged to defend its decisions to the Sydney North Panel when rezoning reviews are lodged,” Emerson wrote.

Baker said the council’s planning department was frustrated and was dealing with it in the same way as the elected body.

“It's a war of attrition,” she says. “They keep at it, they keep raising the good planning arguments.

“But the department just does not listen.”

When asked to comment the Department of Planning and Environment did not specifically address the suggestion of issues between it and the three North Sydney Councils.

In response to written questions, a department spokesman said: “Planning Panels are independent of the Department of Planning and Environment, which only provides administrative assistance.”

On the planning proposal for the development at 360 Pacific Highway, currently before the panel, the spokesperson said: “Once a report has been prepared and meeting date set for later this year, the panel will decide whether the planning proposal has strategic and site-specific merit to be submitted to the Department of Planning and Environment for a Gateway determination.