A high number of developers are planning to roll-out of new offices projects over the next six months as a rebound in confidence ignites financing and speculative projects, according to NAB’s quarterly commercial sentiment survey.

To date, Australia has faired much better than most other countries on both the health and economic fronts, with many activities now returning close to their pre-pandemic normal.

The recovery from the pandemic-driven recession is now filtering through into commercial property market sentiment, with NAB’s survey, a measure of sentiment based on expectations for capital values and rents, lifting for a consecutive quarter.

“While [our] index lifted for the second straight quarter, it is still very negative and well below the long-term survey average,” NAB chief economist Alan Oster said.

“However, expectations are improving for a stronger near-term recovery in economic activity and a lower peak in unemployment, which is seeing overall confidence levels in commercial property markets improve.”

Sentiment continues to diverge across sectors amid ongoing travel restrictions, with office and retail sentiment lifting and CBD hotels continuing to lag, sitting as the weakest asset class.

Industrial sentiment however rose sharply over the quarter, supported by ever growing demand in online retail and continued requirements for available warehouse and logistics space. 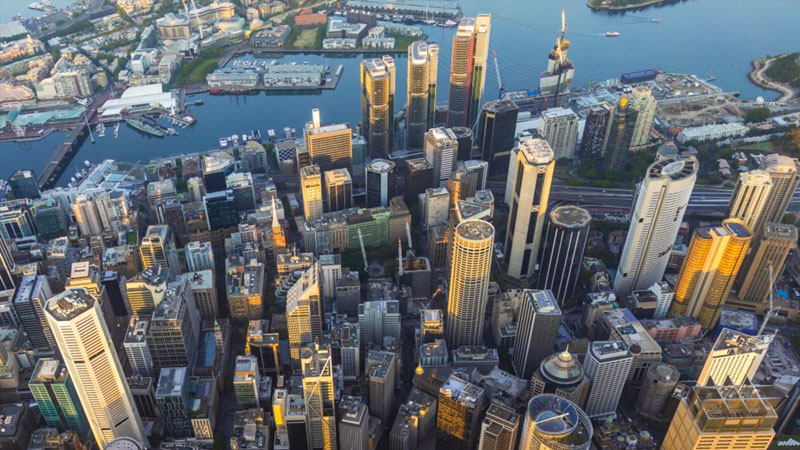 On the development front, over half of property developers surveyed said they planned to commence works on new office projects in the short-term, up from 39 per cent in the previous survey.

“The survey highlights a shift in emphasis among property developers planning to start new works from residential to commercial building,” Oster said.

“A below average of developers said they were targeting residential developments, down from the previous quarter, but more are planning to start new works in the industrial, office and retail sectors.”

Shoring-up optimism has been the post-vaccine outlook for revenue and profitability.

Despite this, longer-term changes to workplace are still playing out as employers and staff seek a new balance in flexible work arrangements.

Of the 370 property professionals surveyed by NAB the average expect over three in four (77 per cent) of white collar workers will return to CBD offices post-Covid.

Some forecast a reduction of as much as 10-15 per cent in annual net absorption as work-from-home rates increase and firms search for 80 per cent of their existing CBD office foot print post-Covid, offset by greater workplace space ratios.

NAB said it expects the national vacancy rate, which remains unchanged at 9 per cent, to climb to 9.4 per cent in the next 12 months as businesses attempt to reduce their property footprints, before easing to 8.9 per cent in two years’ time.

“The outlook for capital growth for the next two years is for contraction in office, retail and CBD hotels, but at a slower rate than forecast in the third quarter,” Oster said.

“Industrial property expectations were however upgraded, and raised in all states, insulated by unchanged vacancy rates of 5.8 per cent.”

Property professionals also pointed to a big improvement in the ease of acquiring debt and equity to run their businesses across the fourth quarter.

They also expect debt and equity funding conditions to continue improving over the next six months, bringing them back to levels not seen since mid-2015.

Across the quarter, the average pre-commitment to meet external debt funding requirements for new developments in Australia fell to 63.3 per cent for residential property, but increased to 60.6 per cent for commercial.