It’s part of the $5.4-billion Cross River Rail project taking shape across Brisbane, and will connect and service critical infrastructure including the Princess Alexandra Hospital, the Boggo Road Ecosciences precinct and the city’s newest high school at Dutton Park.

The state government-led project will comprise a 10.2km rail line from Dutton Park in Brisbane’s southern suburbs to Bowen Hills in the city’s north, with a 5.9km tunnel under the CBD.

Queensland Premier Annastacia Palaszczuk unveiled designs for the bridge and said the Cross River Rail project was critical to the state’s economic recovery.

“We’re building Cross River Rail—the largest infrastructure project in Queensland’s history—not just to create jobs, but to make it easier for locals to travel throughout the southeast,” Palaszczuk said.

“Linking our public transport system with the hospital, new high school and the new science and education precinct will make it easier for many locals to get to work and access essential services.” 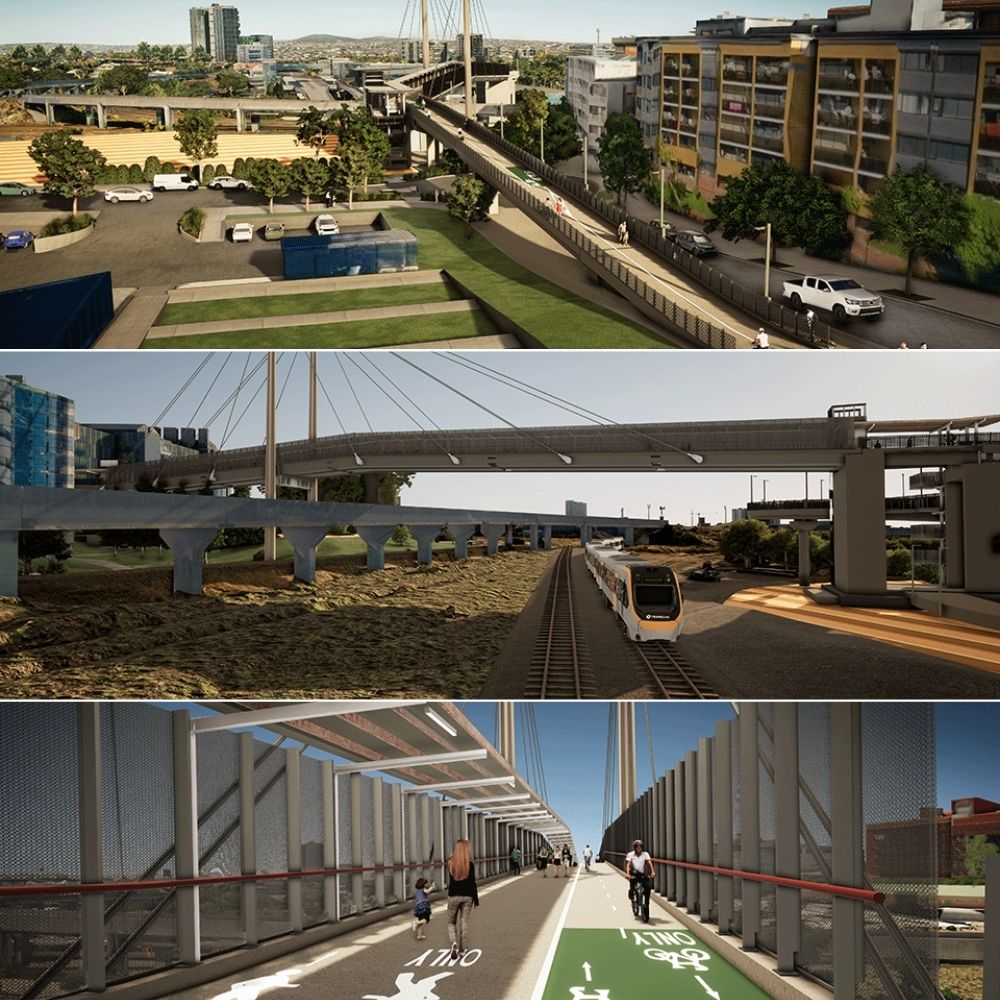 The cable-stay bridge will be almost half a kilometre long with a cable spire rising to 45 metres.

The main deck will be about 20m above the ground and more than 6m wide, constructed from 1600 tonnes of steel, and 43m tall pylons with 683m of cable stay and five individual steel girders weighing up to 133 tonnes each.

Transport and Main Roads Minister Mark Bailey said it was a key piece of infrastructure as well as the delivery of four new train stations.

“Cross River Rail is a truly transformational project, injecting $4 millon a day into the economy by supporting jobs and industries across the state,” Bailey said.

“Last year was full of massive milestones for the project as we completed the year of tunnelling, and we’re continuing that momentum into 2022.

“The bridge and the new station it connects with will see Boggo Road become south-east Queensland’s second busiest transport interchange with more than 22,000 commuters using the new station each weekday by 2036.”

Twin tunnel-boring machines completed their 4km journeys last year, breaking through to the surface, while excavations at the Boggo Road station are now complete and the build is under way.

Construction of the bridge is due to start in March and should be completed in late 2023. The Cross River Rail project is due for completion in 2024.

The state-owned company will develop the land above the Roma Street, Boggo Road, Woolloongabba and Albert Street stations.

The stations will play a key role in the 2032 Olympics with their precincts strategically located near major venues, including The Gabba and Brisbane Arena.

“This is an unprecedented opportunity for QIC to work with the Queensland government, Cross River Rail Development Authority and EDQ to refine the masterplans for the above-ground sites with the goal of providing Brisbane with connected city-shaping lifestyle, residential and commercial precincts,” O’Brien said.