Building approvals for apartments and townhouses were down 40 per cent at the end of January, signalling a dramatic downshift in the high-density sector.

According to the Australian Bureau of Statistics data it is the lowest non-house building approval rate since January 2012. Private house dwelling approval rates were down 12.2 per cent.

CBA senior economist Belinda Allen said the decline in building approval figures was sharper than the 2 per cent forecast, but follows a record high private house approvals rate in December 2020.

“Private house approvals…are still up an extraordinary 38 per cent over the year. In contrast multi-unit approvals are lower by 22.7 per cent over the past year as demand for the type of housing shifted during the pandemic,” Allen said.

Allen said she expected this trend to continue with the ongoing popularity of working from home, and the population shift to regional areas.

“We continue to expect strong growth in renovation activity over the first half of 2021. This is being supported by low interest rates, HomeBuilder and the lift in dwelling prices.” 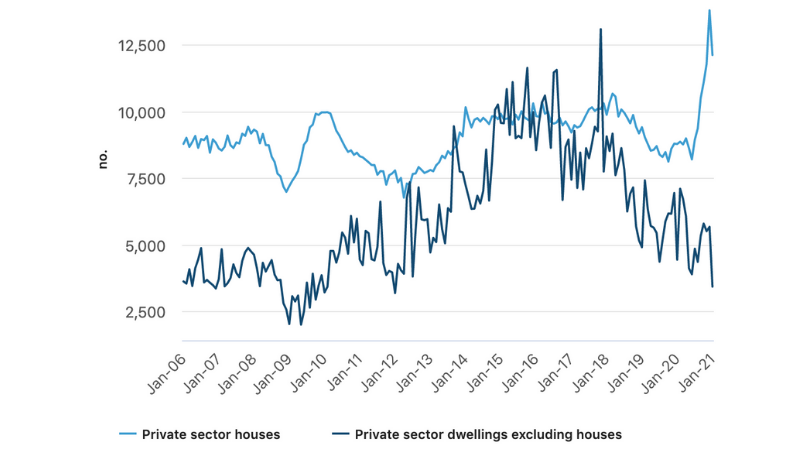 In this month's Finder RBA Cash Rate Survey economists and experts weighed-in on the apartment sector with more than two-thirds claiming apartments were a risky investment in Melbourne and Brisbane, and 61 per cent saying Sydney was also a liability.

Finder’s head of consumer research Graham Cooke said while property prices were on their way up it was prudent to do your research on the market.

“Despite this boom, rent prices have struggled. There are a number of factors for this, including millions of renters who lost jobs or had hours reduced and a lack of long-term international visitors and students. If you have a deposit saved and are deciding between investing in a unit or a house, it’s worth keeping this outlook in mind.”

Dwelling approvals fell across all states, in seasonally adjusted terms; Queensland 33.3 per cent, Tasmania 24.8 per cent, New South Wales 23.2 per cent, Victoria 13 per cent, Western Australia 4.1 per cent, and South Australia 0.5 per cent.

More than half of Finder's respondents agreed that the removal of responsible lending regulations could lead to an unstable level of household debt across the country. Monash University macroeconomist Mark Crosby said household debt was already at concerning levels.

“There is an implicit assumption forming that property prices won't fall and it is fine to gear up. Same as 2008, and many previous speculative bubbles,” Crosby said.

At its board meeting today, the Reserve Bank of Australia decided to maintain the current policy settings, including the targets of 10 basis points for the cash rate and the yield on the three-year Australian government bond.